Life Is a Numbers Game

On August 13, 2013, I forced myself to say goodbye to my senior Jack Russell rescue Minnie Winnie. She had developed intestinal lymphoma that my vet had diagnosed the previous September. I was thankful to have an anonymous sponsor pay for the surgery that re-sectioned her colon and removed her spleen along with a chunk of her liver that luckily was benign. 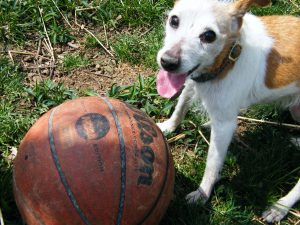 In remission from intestinal lymphoma, Minnie Winnie poses with her beloved basketball

Whatever your thoughts might be on “heroic measures,” the result was that Minnie Winnie recovered better than she was before her surgery! She played with her basketball and barked happily like all good Jack Russell terriers do. The vet deemed the surgery a success and reminded me at her death that Minnie Winnie had gained the equivalent of 10 years had she been a human. He also thanked me for letting her go before she started her inevitable decline.

I had no idea then that seven weeks later I would be euthanizing my 12-year-old dachshund Ginger. Five months earlier, Ginger had been diagnosed with a sinus tumor. Her only symptom was chronic reverse sneezing initially thought to be allergy related. Later Ginger’s bloody nose caused my vet to re-evaluate what actually was going on. Adenocarcinoma is not as forgiving as lymphoma, but Ginger survived those months on Atopica alternated with prednisone. When the tumor penetrated her brain causing a stroke, we were done. But up until that occurred, Ginger had been well. 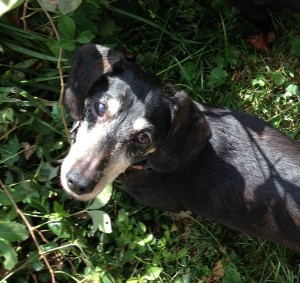 Seven months later my mother decided to crash their party after she fell the day after Christmas and suffered her own brain bleed. My mother survived a few months, dying March 17, 2014, two years and two weeks after my dad passed on March 2, 2012.

My dad had been sick since 2007 with a gastrointestinal stromal tumor or GIST. Similar to Minnie Winnie prior to her surgery, he lost weight. I watched my dad dwindle to 80 lbs. when normally he would weigh 140 lbs. But like Minnie Winnie, my dad was optimistic and enjoyed life up until the end. After he died, I would look at Minnie Winnie’s chocolate brown eyes and see my dad. Caring for Minnie Winnie during her remission helped my grief process in regard to my dad. It also helped me better understand my mother’s caregiver fatigue and frustration she experienced when she could not do more for my dad. With Minnie Winnie I had the gift of being able to say good-bye earlier rather than later.

Now as the current resident terriers Zip and Trevor reach 14 and 16 years of age in September, I remember the deaths of Minnie Winnie and Ginger along with my parents’ passing. The dogs really did have it better than my parents because they simply did not know what was happening at the end. They lived in the moment and enjoyed their time. I strive to provide the same quality of life for these dogs who remain.