Living and Working with Deaf Dogs 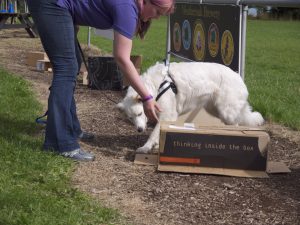 Our canine companions are remarkably adaptable and, based on current thinking, this ability has allowed them to take advantage of the rubbish dumps created by primitive humans and shaped the transformation from wolf-like ancestor through to domesticated dog.

I often feel that their talent at interpreting our sometimes hurried and chaotic verbal language is nothing short of miraculous! In some ways then, the deaf or partially-deafened dog has an advantage over the hearing dog.

Born with restricted senses, these dogs not only are largely oblivious to our verbal cues, their owners or guardians are well aware of the futility of chattering cues to their dog. While most dog trainers are comfortable with the idea that dogs find body language easier than verbal instructions, owners can struggle to take this information on board. This makes sense. We are after all a species that communicates volubly with the spoken and the written word. Of course humans use and read body language too, but we are often less conscious of its contribution.

New deaf dog owners can clearly see how easily their dog learns to respond to them despite having little or no access to the verbal cues. This was certainly the case for Farah and I. Farah was a seven-month-old bundle of deaf blue merle collie excitement when she joined my family as a companion for Finn, my older border collie. Farah was (and is) completely deaf and appears to have been so since birth. Having devoured what little literature there is on deaf dogs, I was keen to learn how to communicate with this little bundle of trouble.

Being entirely deaf, Farah is not startled by loud noises or particular vibrations as some partially-deaf dogs are, which has been an advantage. Like most profoundly deaf dogs she sleeps very soundly and we have agreed on a simple hand on the shoulder as her ‘time to wake up’ signal. Although much of the literature and common advice given to deaf dog handlers includes the suggestion that you should continue to talk to your deaf dog and clearly mouth your cues to them, I have never found this particularly helpful. Both in working with my own deaf dogs and with those of clients I find that the dogs are naturally focused on your hands, and the face merely provides back-up through the expression of encouragement or happiness.

I suspect the idea of mouthing cues comes from the human practice of lip-reading, which makes more sense when not directed at dogs. I propose that with dogs who were born deaf, while they may learn to distinguish between facial positions, they are unlikely to learn to lip-read a language they have never heard. This advice also means the handler having to think about yet another thing (treats, leash, signs, lip-movements, making sure dog can see your face….) rather than paring right back to the essentials – your hands. The converse of this might be handlers who become wooden in their movements when they try to stop talking to their dog!

Where a dog has gone deaf through old age, continuing to speak to them and mouthing cues may be more useful. Having your dogs learn some basic sign language/hand signals when they can still hear you can ease the transition into deafness in later life and reduce any associated anxiety.

One of the first tasks in any new partnership is to establish some lines of communication. While I have suggested that deaf dogs have a certain advantage when it comes to ignoring the human tendency to nag and chatter cues, the hearing impaired can suffer from a lack of connection – particularly where no sign language has been taught. A large part of my work is with rescue organizations and I have noticed that the deaf dogs in our kennels are somewhat protected from the daily noise, but are also unable to hear the kennel staff chatting as they pass their kennels, or talking gently to them when cleaning or feeding. Most dogs without information on what is expected of them can struggle with frustration but the deaf dogs I work with seem to find it particularly hard. Excessive barking and vocalizing is common and difficult to interrupt or stop in that setting.

Whether working with a new dog of my own, a client’s dog in a private lesson or a dog in an animal shelter, one of my first considerations is to help the handler create a clear signal to let the dog know when they have got something right! My personal preference is to use the following signals:

• thumbs up = good dog, a generic signal that may or may not be followed by food, petting or a toy. This is good to teach to everyone who comes into contact with the dog
• hand flash/flicker = this is my sign for a ‘click’ so is always followed by a reward. I only show this to people who will actually be training the dog
• small LED torch flash = another useful way of ‘clicking’ the deaf dog during an activity and, if done skillfully, means you don’t have to be beside the dog! Again only used by those who are training the dog and beware of shining the light in their eyes! 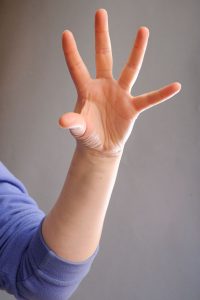 Assuming the dog is not reactive to humans or the handler in particular, I would also teach a simple attention cue such as a tap on the shoulder. Most dogs turn when tapped (gently!) so it is easy to pair the tap with a tasty treat. This gives us a valuable method of redirecting the dog’s attention and can be helpful with frustrated barkers when we need to move on to another activity.

I really enjoy using clicker training with deaf dogs and find that it works more easily than lure/reward (my hand is free to give the signal rather than being full of cheese) while allowing me to signal a reward from a distance.
The next stage would often be to work on a hand target, essential for positions, recall and direction signals later on. These simple exercises begin to build a bridge of communication between handler and dog. Both should have a sense of accomplishment and, more importantly, the dog starts to develop a sense of control and confidence.

When Farah was about two-years-old, we attended a charity fundraising dog show for Hearing Dogs for Deaf People. We took part in the classes, and did a short demonstration in the main ring. Afterwards, many of the visitors wanted to meet Farah and were delighted by her friendly nature and desire to stare up at them with her intense blue eyes.

Sitting to one side as Farah met her fans, I was struck by her intense focus on their hands. Some of the visitors were deaf themselves and so were signing at her and each other. Farah sat in the middle of a ring of admirers and, although she couldn’t understand their language, she looked positively delighted at being included in the conversation. The people were eager to learn Farah’s own sign language and patiently tried it out, understanding the importance of communicating with her in her own ‘words.’

Farah is an excellent stooge dog for rehabilitation work, happily works as a demo dog at shows and fundraising events, takes part in Rally and has completed all three levels of her KC Good Citizen award. She is also a certified Pets As Therapy dog.

Morag Heirs PhD, MSc, MA(SocSci)(Hons), PGCAP, Human and Canine Remedial Massage Therapist, is a Companion Animal Behavior Counselor who runs Well Connected Canine in York, UK. She works with deaf and blind dogs professionally, provides training and support for the Deaf Dog Network and is the behaviorist for Sheffield Animal Centre (RSPCA) and York & District RSPCA branches in the UK.