Buddha, my black Labrador, has always had a sharp sense of hearing.  Teaching him to respond to word cues was easy, and I also taught him several hand cues.  Doing so probably saved his life on one occasion. 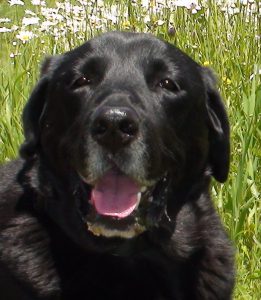 About eight years ago a solar panel system was installed on our barn roof.  That required a crew of workers to have access in, out and on top of our barn for three days straight.  I put our horse and sheep in their paddock and let my three Labradors play in their fenced dog paddock, attached to the barnyard.

One afternoon I took my dogs to the barnyard so I could clean water buckets in the horse paddock.  I worked on one side of a gate while my dogs watched me from the other side, after  securing the barn door to separate them from the workers.

While scrubbing a bucket I heard a barn door slam shut and I looked up.  Seeing the nearby door was closed comforted me…until I looked around and did not see any of my three dogs.  As I rushed out the door on the far end of the barn I saw Buddha chasing Gandhi over a hill and out of sight.  Jake, the elder dog, remained with me.

Although we live one-quarter mile from the roadway, it is a U.S. Highway and carries heavy traffic, including many trucks.  I ran cross-country to the highway, considering the worst case scenario that my dogs would end up there.

When I reached the gravel shoulder of the highway I saw Gandhi bounding across the traffic lanes.  A semi-tractor pulling a trailer was coming up the hill toward him and the driver was blowing his air horn frantically.  It was too late for me to do anything about Gandhi so I quickly scanned for Buddha.

Sure enough, he was standing about 300 feet away, at the edge of the roadway, looking as though he was about to follow Gandhi.

In that moment I realized I was about to witness the bloody death of my beloved dogs, and a likely multiple vehicle traffic crash.  Two cars were following the semi-tractor and another car was coming from the other direction.  If anyone swerved to avoid my dogs, there could have been a head-on collision.  My heart skipped a beat…or two.

I waved to get Buddha’s attention and he looked at me.  Then I gave him a hand signal to sit, and he did so.  Next, I gave him another signal to stay in place and hurried to him, putting his leash on.  At least I could keep one dog safe.

When I looked across the highway I saw that Gandhi had stopped and turned around.  Gandhi loved nothing more than a chase game and had probably glanced back to be sure that Buddha was still in the game.  Before I could give Gandhi any instructions, he dashed back to me, crossing the path of the cars.

My heart stopped a second time.

I celebrated not only that my dogs had survived, but that I had invested time in their initial six months of training to teach multiple hand cues, to generalize and proof them, and that my relationship with them was so positive they could focus on me in the midst of chaos.

Fast-forward to last winter and I noticed that Buddha, now going on 13 years, was no longer reliably responding to word cues.  He had always responded perfectly, even to a whisper.  He also stopped responding to other environmental sounds, such as when I opened a door upon returning home, or when I opened the food bin when it was time for his supper.

We lost Jake five years ago, but Gandhi and Buddha enjoy three walks a day on our trails.  Over the years we have encountered all manner of wildlife ranging from baby birds on the ground, flocks of turkeys guarding their young, raccoons, woodchuck, coyote and deer.  On several occasions my dogs were inclined to pursue the critters, and on each occasion I easily called them back to me. 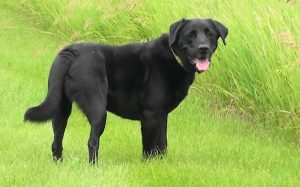 As spring approached I wondered whether I should put Buddha on a leash during our walks, as he often trotted ahead of me and I would be unable to call him back on cue.  Gandhi, however, remained extremely responsive to word cues.  Since Buddha paid close attention to Gandhi, I thought that if I needed to communicate with Buddha, I might do so through Gandhi.  I also found that when I clapped my hands, Buddha still heard that sound and would look at me, so I could then use hand cues.

Each trail walk since March has been an experiment, as I knew we would begin seeing the return of ground nesting birds to our property, followed by oodles of baby birds, bunnies, squirrels and other animals.

Watching Buddha has been a fascinating process.

If he is leading the way, he now more frequently stops to look back at Gandhi and me.  When we reach a fork in the trail, they both stop and look at me for direction.  If I direct Gandhi to go in one direction or another, Buddha follows him like a trailer.  Thus far, keeping the peace during trail walks has been very successful. 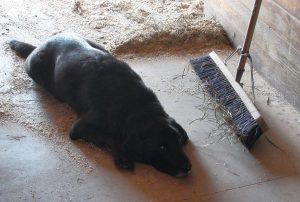 Another challenge is when I clean the horse barn in the morning.  Buddha and Gandhi enjoy lying on the cool concrete of the barn aisle, while I clean the stalls.  Sometimes Fancy, our American Paint mare, is hanging out in the barn with us, and our two sheep.  That means there is a lot of congestion and the potential for animals getting into each other’s spaces.

Fortunately, all of our animals are friendly and safe together.  However, Fancy weighs 1,100 pounds and likes to wander from stall to stall, and to visit the water buckets along the aisle.  Gandhi can hear her coming and politely moves out of her way, but Buddha lies flat on his stomach like a salamander, watching my every move.  He does not seem to hear her coming, and although Fancy is very patient and stops to wait for him to move aside, Buddha does not know she is there.

I worry that if she moves forward, Buddha may startle and suddenly pop up, which may spook my horse.  Horses are prey animals with unusual vision.  They tend to move suddenly when they are startled, and that would be unsafe.

To compensate for that potential problem, I developed a habit of playing hall monitor and supervise the traffic throughout the barn.  If I see Fancy coming up from behind my dogs, I stop what I am doing and encourage them to come to me.  Buddha responds to my hand signals and I celebrate his arrival, as Fancy calmly reaches her destination.

While we are in our home, Buddha tends to follow me around and will lie on the floor to rest once I have entered a room.  When I leave the room and approach Buddha from behind, he no longer hears me and so I have to take care not to startle him.  I gently tap the floor in front of him with my finger, or blow a puff of air at his face.

Buddha responds with a happy expression, and the expectation that we will proceed with another of his many daily belly rubs.  It is a tradition we have maintained for 10 years or more.

Living with a dog who is going deaf is proving to be manageable, in large part because of the effort taken from the beginning to teach hand cues, and to proof behaviors.  But there is a lingering disappointment.

When I settle next to Buddha and whisper sweet nothings to him…he can no longer hear my tender words of love and affection.  But his face still lights up, for he can still read my facial expressions and body language.  That will do, Buddha, that will do. 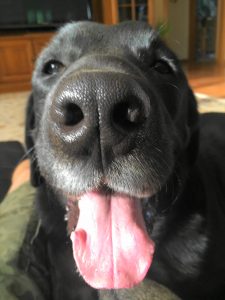