Look at the Whole Dog 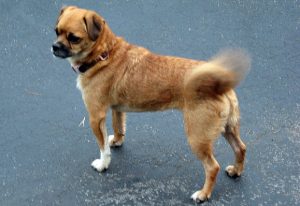 In a class I’m teaching on dog communication, we recently discussed a study on how well people interpret dog body language. The study, Description of the behaviour of domestic dog by experienced and inexperienced people, was published in Applied Animal Behaviour Science in 2009. We looked at some other sources as well, but the discussion of this study with a group of future dog behaviorists and trainers was particularly interesting.

The study’s authors wanted to know whether the amount of dog experience a person had improved his or her skills at reading dogs’ body language. They created a set of nine videos of dog-dog interactions and had two independent behaviorists categorize the predominant behavior in each. They then showed the clips to observers from four different groups: veterinarians, professional trainers, dog owners, and people with no dog experience. The dog professionals and owners had at least two years of hands-on dog experience.

The clips were not available, so I have not seen them, but they are described in the paper as unambiguous, and a short description of each clip is provided. Observers were given this list of adjectives: indifferent, fearful, confident, friendly, submissive, defensive, playful, aggressive — with no behavioral definitions. Each adjective describes the predominant behavior in a different video.

A “control dog,” a dog who was trained and known to be non-reactive, was shown meeting each of eight other dogs. The ninth clip showed the same control dog playing with one of the eight. Observers were told to focus on the non-control dog in each video (a different dog was used for each).

After watching each clip, each observer was asked to rate on a 6-point scale to what extent the video showed each of the eight adjectives. They were then asked to select which was the predominant behavior. Observers were then asked to justify their choice by describing behaviors the dog had exhibited that made them choose it: What about the dog’s body language suggests this behavior?

Very little difference was found between people with and without dog experience, except that the non-dog-owners were less able to recognize play solicitation and confidence. Indifference was recognized by most of the observers, with friendliness a not-very-close second.

The scariest result: a third of the observers saw aggressive behavior as playful. Sadly, 43 percent saw actual play as aggression.

Their descriptions of the body language (mis)cues they relied on are telling: Most descriptions focused on tail, muzzle-related, and large-body movements. Nearly all tail movement was described as “wagging,” and it was always identified as playful. Nearly all barking was seen as aggressive and growling as defensive. The only clip where a dog’s teeth could be seen was the active play video, but two-thirds of the observers who mentioned it saw it as aggression.

They saw all sniffing behavior as friendly or confident, so some education on displacement and stress behaviors might be needed too, though without seeing the videos, it’s hard to know what kind of sniffing actually occurred.

Few of the observers talked about raised hackles, ear position, where the dog was looking, or whether the dog was doing “whale eye.” They paid more attention to large, whole-body movements, such as a dog hiding behind the hander, than to more subtle cues, such as looking away or a stiff stance. Where piloerection was mentioned, it was regarded as aggressive, though it appeared only in the actual play clip.

It’s not surprising that people with no dog experience would be unaware of the more nuanced dog body language cues, but dog owners and dog professionals need this information!  Clearly, a lot of work needs to be done teaching dog owners and even professionals to distinguish between play and aggression.

It would not be difficult to integrate some analysis of dog body language into dog-training classes. Watching a 20- or 30-second video of appropriate and another of inappropriate play can teach a lot. Even still photos of a happy dog “smile” vs. a stress “smile” can be instructive. Teaching dog owners to better understand their dogs’ body language can only improve their relationships and make for safer interactions between dogs and people and other dogs.