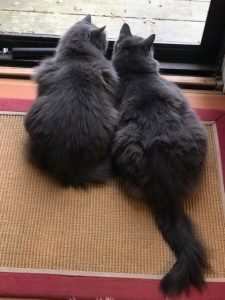 Sabi and Wabi are 7-year-old long-haired Russian blue neutered male siblings. When their previous owner, an elderly man, died suddenly, they were left alone in their home for several months “fending for themselves.” Family members stopped by once a week only to put out food and water. Although the family described them as affectionate, the cats had become extremely fearful. When a local shelter was called in to remove them from the home, they “went wild” and had to be captured. Both Sabi’s and Wabi’s fur was badly matted, so they were sedated and shaved. They were housed in a room with other cats, and during their two months at the shelter, they hid in a double-decker cat condo—each cat in one of the hiding holes—and shelter staff was unable to handle them. Read more.