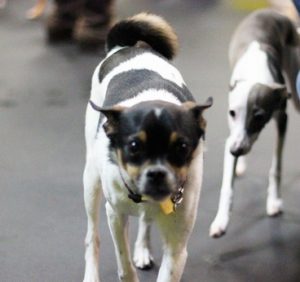 I have a friend who, no matter what crisis he’s going through, will tell you he’s fine. While shopping one day I came across a t-shirt that reminded me of my friend. The shirt had a picture of a cow lying in a field with her legs straight up in the air, like a dead insect; the caption read, “I’m fine”.

The bulk of my business is going into homes to do behavior consultations and I can tell you that while the humans can see the obvious signs that their dog is a bit off such as barking, lunging, growling etc., they have a difficult time picking up on other, less obvious signals. In fact, most of the clients I’ve worked with will label the “absence of behavior” as fine!

Take for example, the dog who is uncomfortable around strangers; the human, in an effort to “socialize” their dog will allow strangers to approach the dog when they’re out for a walk. Having learned the dog’s history, from the client, I’ll ask what their dog did when the stranger approached, and they typically will report that the dog is fine, which after further questioning, I discover that the dog was frozen like a statue, ears back and glued to his person’s flank. So the other question I’ll ask is, “Why do you think your dog was fine?” and they respond that if he’d been uncomfortable, they’d expect him to growl or lunge at the stranger. The interesting thing is that given the dog’s discomfort with strangers approaching, over time these dogs will typically will growl, lunge and or bite and that’s when the human reports that her dog used to be “fine”, but now he’s “acting out”!

A friendly, comfortable dog is happy to meet new people. His body is loose and he wiggles from excitement. And while that hardly describes every body posture of a “happy” dog, there’s something about the dog that communicates his willingness to engage people or other dogs. If your dog is not doing that, there’s a good possibility he’s not fine

I have taken my own dogs to dog-social meet ups and I can tell you, that my normally outgoing, social beast was not a happy camper at this particular event when he was being chased by some dog. With his tail tucked, head and shoulders lowered, and trying to escape this “pesky predator” his posture was very telling. Conversely a friend and her dog also attended this soirée and she was sure her dog (frozen stiff in the middle of the herd of dogs, saliva running down her chin) was just fine!

As dog parents, it is vitally important that we pay attention to the signals our dogs give, especially when it appears they are doing nothing. There are numerous books with illustrations that show canine body language and once you become familiar with the signals, you’ll learn among other things, that “fine” is not part of a dog’s repertoire of behaviors.

You might have a mighty “fine” dog, but that word does little to describe what your dog is doing or about to do when he’s uncomfortable! Remember, all dogs are “fine” until suddenly they’re not!