I’ll give you the moral of this story first: Make peace with muzzles. Be OK with dogs who wear them, applaud owners who use them, and put one on your own dog if the situation warrants it.

Now I’ll tell you the story. It’s about mistakes I made that led me to this moral. I hope it’ll bring you there, too. (And if you only read this far, at least check out The Muzzle Up! Project’s website.) 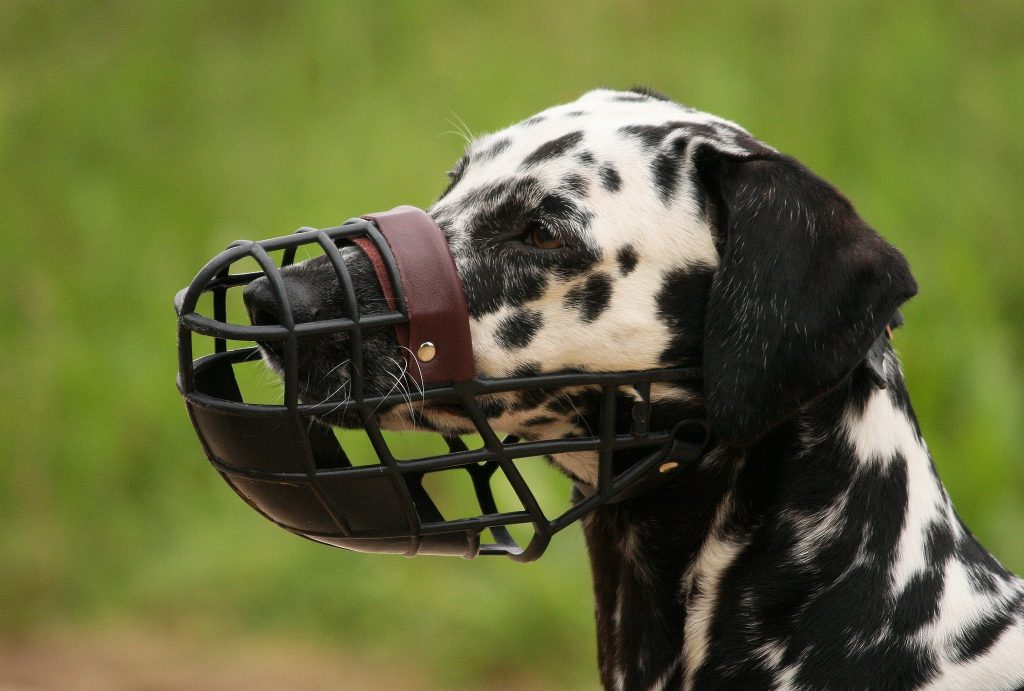 Years ago I had a gentle, low-key mutt named Sachem. She was easygoing with other dogs until her later years, when she started barking and lunging at them on walks. What to do? This was before my dog training days. My only idea was to yell at her to stop–which, unsurprisingly, she did not. Great. Now we were both raising hell.

Sachem’s bark was worse than her bite…until she started biting. The first time, she jerked the leash out of my hand, tore across the street, and applied her teeth to the hind end of a schnauzer. She didn’t break skin. Still, the schnauzer’s owner was irate. I was stunned, penitent–and in denial. I told myself this was a one-off thing. My dog wasn’t that kind of dog.

Then it happened again. Same schnauzer, same ambush by Sachem, same mortifying interaction with the owner. Again no broken skin, no vet visit. At this point, though, I switched to a standard leash and chucked the retractable one, which somehow (!) kept slipping out of my hand. I figured Sachem had a grudge with that particular dog. In all other contexts she’s a lover, not a fighter!

Months went by in peace. Then one day Sachem was hanging out in the yard (which she’d done without incident for almost ten years) when a lady strolled up with a little white Westie…and…chomp! This time there was a bump and a bruise, a visit to a vet, and a $35 bill, which I reimbursed. I’d gotten off easy; this could’ve been so much worse. 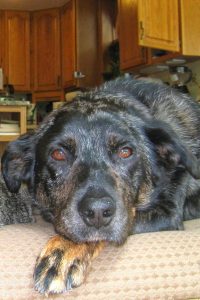 A docile and serene dog…who bites.

Sachem was lying at my feet, docile and serene, when the owner came by to collect the money. She was surprised this was the same dog who’d tried to eat her Westie. I couldn’t reconcile these two versions of my dog, either. I held tight to “docile and serene” and rejected “…who bites.”

Chastened by this small crisis, I started keeping Sachem tethered when she was with me in the yard. But as more time passed without drama, I got lax. I was in the back yard pulling weeds one afternoon, with Sachem untethered nearby. When she wandered off, I didn’t notice. Suddenly there was a burst of frantic yelping out front, and I knew as I raced to the scene: Sachem had struck again.

This time it was two dogs. Sachem had bitten both and broken skin. The owner was a neighbor who happened to be a vet, so she stitched them up herself. There was no bill for me to cover; I paid in guilt and regret. There were other costs, too. My neighbor’s young daughter, who had seen the fight, was traumatized. The dogs had painful wounds. My neighbor no longer felt so neighborly toward me. I felt lucky she didn’t press charges.

Luckily there were no more incidents. Sachem died of cancer just as I was starting my apprenticeship to become a dog trainer. Why, though, had I let these bites happen over and over?

For one thing, I was lulled by a conviction that my dog was a “nice” dog. Not a biter. Well, guess what? A dog can be both.

Also, I didn’t want to believe I was the kind of person who had a dog who bites. Breaking news: Anyone, including nice people, can have a nice dog who bites.

We can lock our dogs away forever, cutting them off from the outside world; or we can concoct reassuring excuses for each bite, hoping if we ignore the problem, it’ll go away. Are those our only options? Nope. Looking back, I could’ve solved this whole thing with a basket muzzle.

I know what you’re probably thinking: “Dogs who need muzzles are dangerous!” And possibly: “I wouldn’t want to muzzle my dog because everyone would think he’s dangerous!!” But hear me out. A dog wearing a muzzle is a safe dog. There’s no need to wonder if he’ll bite. He can’t. And while muzzled, he can safely work through a behavior modification program to address his issues.

Unmuzzled, any dog can bite. Luckily, bites–especially serious ones–are rare. Yet once a dog has bitten (regardless of why, or how hard) he has a bite history, and the best predictor of future behavior is past behavior. That was certainly true of Sachem. Back then I took the few precautions I could dream up and hoped for the best. Look how that worked out.

Hoping doesn’t end biting. That, my friends, is a job for a muzzle.

Muzzles prevent bites. Sadly, our society still stigmatizes muzzles, the dogs who wear them, and even their owners, so there remains a widespread resistance to using them. And that’s a real shame. If I could go back to my time with Sachem, I’d muzzle her right up and bask in the peace of mind it brings, instead of holding my breath and crossing my fingers. 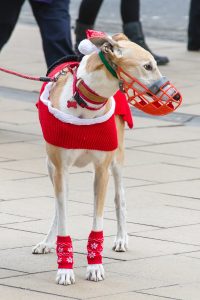 Muzzles need a PR makeover. Picture a world in which every dog wore a muzzle–and liked it! Think of it–tricked out muzzles, bedazzled muzzles, rainbows, stripes and plaid. Dogs covetously asking other dogs, where’d you get that muzzle? Artists selling custom muzzles on Etsy. Dogs fetching their leash and their muzzle when they want to go for a walk.

OK, enough silliness. We don’t need to muzzle every dog, in every setting. But for some dogs, in some situations, it just makes sense. So in all seriousness, how are we going to make muzzles mainstream? How should we encourage dog owners who need them to use them, to just own it and feel fine about it? How can we support the ones who make the conscientious choice to muzzle up, instead of looking askance at them and their dogs and crossing to the other side of the street?

I don’t have answers; I’m asking. What are your thoughts? The Muzzle Up! Project, a campaign to de-stigmatize muzzles, is a great resource (check it out!)–but they can’t do this alone. What should we be doing to help?

In the meantime, here are some scenarios where muzzling up is (or would have been) a smart choice.