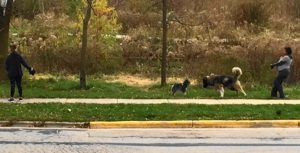 Recently I attended a dog event and observed about 30 dogs and their handlers come and go in the course of three hours. Most of the dogs were taken to one another for greetings. Call it the curse of knowledge, but I see such interactions through the lens of human handling skills and canine body language.

Sometimes what I saw was relaxing and fun and at other times I worried about the outcome, especially when handlers allowed overly aroused dogs to engage each other. There is a correlation between arousal and loss of self-control. I often saw introductions occur spontaneously and without regard to safety.

Case in point, a husband and wife brought their Poodle for puppy socialization. The puppy looked anxious and was repeatedly alarmed by things in the environment.  A moment later a young man walked his adolescent Boxer along the path within 50 feet of the Poodle. The puppy went into a state of alarm. Her body stiffened with the tail raised high and waving frantically as she barked explosively.

The man paused with a look of concern on his face…and then moved ahead and introduced his dog to the Poodle. As they got closer the Boxer became excited, pulling with all his might, dragging the man toward the poodle. 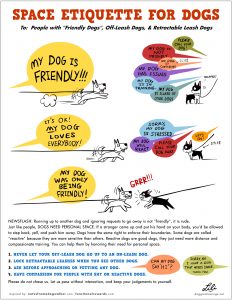 The Poodle became more alarmed and both dogs lunged at each other when they came within range. The man struggled to hold back his Boxer, who was launching vertically and spinning in the air like a crazed ballet dancer.

It was a poor learning experience for both dogs. The Poodle learned other dogs are scary and unpredictable, while the Boxer learned nothing about appropriate greeting behavior.

In another case a lady with a very reactive black Terrier circled around the event while her dog repeatedly lunged and snapped at other dogs.  She scolded her Terrier and then cast her eyes upon a timid Bichon who was held fast by a leash, several feet away.

The lady cradled the Terrier’s head in her hands, pushing him toward the Bichon like a cruise missile while chanting “Be nice!  Be nice!”  She pushed his muzzle directly toward the target.  The Bichon looked about for an escape route, or help from nearby humans, and appeared terrified as the threat steadily approached.

Such introductions may plant the seeds of dog-dog reactivity in fearful dogs. In my experience I suspect as many as 20% of dogs are reactive upon seeing other dogs, when on leash. That is a behavioral problem best prevented by appropriate dog-dog greetings.

When allowed to move freely a well-mannered (off leash) dog will avoid sustained direct eye contact, and approach with a smooth gait in a perpendicular or semi-circular manner. This allows each dog to size the other up and determine whether there is a threat to safety, or a polite invitation to say hello. 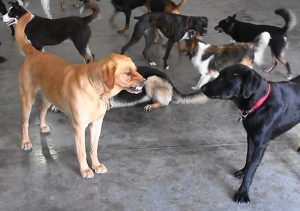 When dogs meet while leashed they lose the option of free movement, limiting their ability to communicate through body language. Communication is vital to signal non-threatening intentions.

Leashed greetings are often face-to-face with sustained eye contact as they close the distance.  Dogs normally do that when they are threatening each other.

Meanwhile, their handlers may be standing still engaging in polite human greeting behavior. That forces dog to remain in close proximity far longer than they prefer.

If leashed dogs choose to disengage they are trapped by leashes and so tension rises until there is an outburst, which could lead to a fight. Dogs who choose to play together quickly entangle themselves and their handlers, and that can turn to panic and conflict.

The best dog introductions are done off leash in a safe area, with two attentive and capable dog handlers who know how to read canine body language for stress signs. A second-best option is to use long training leads in which the slack is left on the ground so the dogs can move about.

I suggest letting the dogs greet briefly, then separate them, and let them greet again. Doing so several times allows them to gather scent and remain calmer during the process.  With repetition the drama of an initial greeting fades and they learn how to relax in the presence of other dogs. 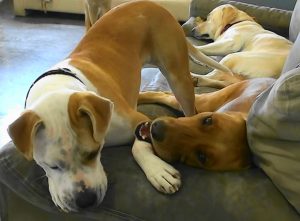 Many dogs I work with who are highly reactive while on leash do well with dogs in a daycare setting or fenced yard where they can move freely and communicate.

When I walk Buddha on leash in public we never engage in dog-dog greetings. I may wave to acknowledge the other handler and then cross the street, or turn around to avoid encounters with (unfamiliar) dogs. I see little to gain by random interaction with unknown dogs, and too much risk.

After all, if you were out for a walk (without your dog) you would probably just acknowledge strangers rather than rush up to them while shouting and waving your arms to greet them. We do not have to closely engage with everyone we see in the community, and neither do our dogs.

I think there is far more value in giving our dogs a positive, relaxed experience each time they see another dog than letting them run amok like rock fans in a mosh pit at a concert.  As always, please be your dog’s best advocate.

Miller, P. (May 22, 2018) Proper Dog-to-Dog Introductions in the Home 1.  From https://www.whole-dog-journal.com/issues/11_1/features/Proper-Dog-Introductions-and-Canine-Socializing_15996-1.html