May Your Bowl Always Be More Than Half-Full

Can dogs be optimists? Pessimists?

Many people see dogs as natural optimists. After all, dogs are very loving and amazingly forgiving of human foibles (and worse — just look at all the mistreated dogs who still love humans). Many dogs greet every stranger as a new best friend. And some dogs are sure that a car ride means fun for dogs!

Cali is one of those naturally sunny, cheerful, affectionate optimists, as I wrote recently on my Thinking Dog Blog. Her mission in life is to greet every single human on the planet — and make him or her smile. It makes her day when she meets someone new on our walk.

And then there’s Jana, my older golden. Several pertinent experiences have taught her that getting into the car could mean that she will be going to be stuck there for days and probably won’t even get dinner on time. She’s been a bowl-half-empty girl for much of her life. I blame the day in her puppyhood when I decided that she no longer needed puppy lunch. Like a true grown-up dog, Jana would have two meals a day. Her anguished pleas failed to change my mind. From her perspective, it’s been pretty much downhill since. 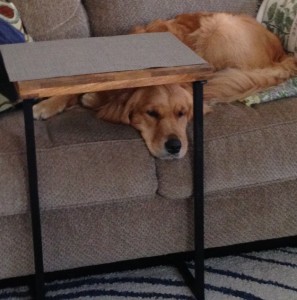 Jana takes disappointment in stride better than Cali does, accepting that on some days, we only go to the park once and that Mom has to work sometimes. Cali (at left, bored) is less sanguine, heaving dramatic bored-teenager sighs my way whenever more than a couple of hours have passed since our last outing (and her last opportunity to meet new people). The contrast between Jana’s and Cali’s outlooks on life could not be greater. Yet both are happy, healthy, affectionate, and playful. I am clearly not the only person who finds this difference in dog personalities interesting.

A British study that I wrote about a few years ago determined that dogs could be pessimists. They studied dogs’ response to being left alone, postulating that separation anxiety behaviors could indicate a pessimistic outlook on life. Then, they did a test of dogs’ expectations when faced with the ambiguous possibility of a treat. Read more here.

A newer study, published in September (this time by an Australian team) also found that dogs differ in their tendency to expect good things to happen. Their test again offered two “rewards” — a tasty drink and plain water. Dogs were taught that one sound meant the good treat; a different sound meant water. When an ambiguous sound was heard, some dogs reacted in expectation of the treat; these dogs were held to be optimists. In fact, some responded happily to the water sound. The supreme optimists. I bet Cali would be in that group.

Interestingly, Jana’s and Cali’s behavior is just the opposite. “Pessimistic” Jana is curious and a great problem-solver. She will keep at any task that has a chance of paying off in a food reward. She’s not at all fearful, but she is very responsible and helpful. Cali, on the other hand, started showing some fear of new items in late adolescence. She recovers well and is curious (after an initial startle and hesitation), but Jana has rarely shown that initial fear. Cali also gives up more easily when she does not immediately succeed at puzzles or other tasks. She’s a cheerful optimist who doesn’t seem to worry much and who gets distracted easily (more people to meet?).

This all raises the old nature-nurture question. Jana got much more thorough early training than Cali did, and has been an eager, lifelong learner. As she ages, she is becoming a bit anxious, which might reflect her pessimistic nature — or not. Maybe, if I had been more consistent and thorough in her early training, Cali would be one of those persistent optimists the study describes. I’ll never know. Many traits, affected by genetics, environment, and experience, make us who we are. But acknowledging that dogs differ in their outlook and approach to life is another way we can tailor our training to their individual needs and strengths.