Meet Your Cat Where He Is 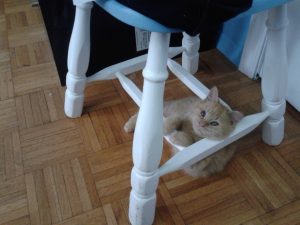 “The problem many people have with their pets is simply that it’s not the pet they want,” said the veterinary behaviorist at a lecture I was attending. And an explosion of insight went off in my head. Sometimes, accurately naming a problem really does help you understand it.

We want a cat who is not the cat we have, so we’re disappointed. We start labeling the cat with words that show our disappointment: aloof, selfish, whiny, sneaky, stubborn. We say the cat has behavior problems, because we find her behavior disappointing. Disappointment turns into dislike. The bond is broken.

We often adopt cats at what is the worst time of their lives: They’re in a shelter or a foster home or a rescue facility. Even in the very best of rescue circumstances, they’re disoriented and confused and scared. They’re living in close quarters with cats they don’t know. They’re not themselves. In fact, they may not be themselves for weeks. We don’t know what we’re getting. No wonder we end up disappointed.

My husband and I adopted a kitten last winter from the city shelter. He was born in a feral colony and wasn’t very social; he adored my other two cats, but ran away from us. A few weeks after the adoption, the shelter called to ask how he was doing. “We adore him,” I told the adoption counselor. “He’s totally fabulous.” By this point, I had managed to pet him only a few times. What made him so fabulous?

Well, he’s ridiculously cute. He’s got a very dense orange coat, and looks like an Ewok (Star Wars fans, you know who that is). He’s super funny and has a squeaky little voice. He follows my other two cats around with something akin to hero worship. He’s very smart about figuring out how to work his food toys. And he’s totally fearless about new objects we introduce into the house.

We actually had no expectations when we adopted him, so he had nothing to live up to. As a result, he made us laugh every day and we quickly grew to love him. We were also able to meet him where he was—with his fears and limitations—and just wait him out.

We started by petting him a little while we were also playing with him: pairing something fabulous (play) with something he wasn’t sure he wanted (touch). We always stopped touching him when he moved away, because I know the more you let a cat decide how much to interact with you, the more he will choose to interact with you. And we always touched him when he stood still and asked for it.

Now, less than a year later, he has pet-me spots around the house—places he jumps onto and then looks back at us, waiting for his body rub. He follows us from room to room. We still can’t pet him in some situations, but in many other situations he asks for contact. And of course, he’s still funny and ridiculously cute. We really do adore him. He will never be a lap cat. But I know I’m a big part of his world, and he’s become a big part of mine.

The bottom line here is just to meet your cat where he is. Think about what you like about him, and don’t assume what you don’t like about him is all there is. He doesn’t sit with you on the couch? Yes, but he’s always in the same room with you. He doesn’t play like a crazy man? Yes, but it’s kind of funny the way he carries the little mousey toy around. He hides when strangers come over? How much sweeter, then, that he trusts you.

Beth Adelman, MS, is a Cat Behavior Consultant in Brooklyn, New York. She currently is a regular speaker on cat behavior at New York’s Meow Parlour and sits on PPG’s Cat Committee.