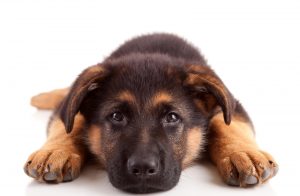 All dogs can benefit from calm spaces and routine, as well as mental and physical enrichment, especially dogs who are incredibly stressed. Photo © Can Stock Photo/HugoFelix

Over the last two years or so, my behaviour practice has welcomed more and more dogs from overseas. Sometimes these are canines with profound behavioural difficulties.  I have always assisted several imported dogs per year but there seems to have been an explosion of dogs from a variety of countries, thanks to the efforts of many local and larger International welfare charities rescuing such animals from dire conditions.  So this year alone, I have assisted dogs from USA, Russia, various countries in Africa, India, Romania and many European countries.

The majority of the dogs that I assist have either suffered terrible abuse, unimaginable and unbearable to think about or have simply been left to roam or been abandoned. The one common factor in all of these cases that consistently leave me astonished is the dog’s ability to cope and adapt.  OK, they may have behavioral difficulties, but you consider the hell on earth some of these dogs have gone through, but they are now living in a completely alien world with sounds, sights, smells they may never have conceived of and yet they just fit in. The other amazing thing is that these dogs still have trust.  This is both wonderful and truly sad given some of the predicaments they have been rescued from, but that’s dogs for you.

The most common issues these dogs suffer with are anxiety issues and adaptability issues, not surprisingly. It’s a bit like going right back to square one with a puppy and re-starting socialization and habituation processes all over again, but with that sensitive ‘window’ of 14 weeks firmly closed. Of course in many of these countries there is no such thing as having a tick list for socialization and habituation, puppy classes etc, you’d probably be laughed out of town if you suggested it.  Many of these dogs are street dogs and attitudes are different in other cultures and this has to be accepted – dogs are not always pets. So, when I see these dogs, they have strong territorial drives, maybe  really aren’t keen on relinquishing items either, don’t want anyone going near their food and haven’t a clue what these dog toys are for!  They also have trouble walking nicely and adapting socially with other dogs. Many are simply incredibly frustrated, they just want to join in and play but don’t know how, they haven’t learned.  There’s nothing ‘bad’ or ‘wrong’ about what they’re doing, they just don’t know any other way and why should they?  It’s up to their new owners to re-mould these new dogs and expectation and reality is a big part of re-homing.  Over-arousal is also a pretty big deal. Everything is over-stimulating.  This is a brand new environment, traffic, smells, bright lights, dogs, people everywhere, everything different from before and sometimes that’s just too much. In combination it causes overload and a massive ‘trigger stacking’ response.  So, I see a lot of dogs displaying much vocalization and reactivity at multiple triggers, which can be embarrassing for their new owners.

When beginning behaviour modification, most of these dogs need calm spaces and routine, especially those which are incredibly stressed.  They also need something to do to occupy them, so mental and physical enrichment is a good starting place.  For those which become over-aroused quickly, I would work on self-control and impulse control exercises and add in lots of positive reinforcement.  It is important to teach the owner to remain calm too, not always easy when their dog is super reactive, but learning to read their dog and stay calm and focused will greatly assist. Desensitization, counter-conditioning and response substitution techniques using games are great tools for dogs expressing fear and anxiety and quickly help in alleviating this.

It is important that all owners rehoming dogs from overseas have a realistic expectation regarding outcomes and really think about the possible impact of the trauma their dog may have experienced. Although it may not always be a straightforward remedial process, the long term reward of a safe, pain free and content life is immeasurable.