My Dog Is a Sociopath!

My dog is a sociopath! Well he must be because I’ve never seen that “guilty” look on his face when I come home and he has destroyed something!

Apparently most dogs are very guilty creatures. Just Google “guilty dogs” and you’ll see an array of photos and videos, some of which have gone viral. Heck, Good Morning America invited Denver the Guilty Dog on their program, along with his housemate, Macy, who was not a guilty dog, but a “sneaky dog”…hmm.

It is just my luck to have a dog who doesn’t cower when I come into the house, or feel bad about any of his mischievous acts. I cannot tell what he’s thinking, because I’m not a mind reader of hounds (or humans for that matter), but apparently a lot of people are because  they’ll tell you the dog feels guilty (for making a mess) or superior (when he walks in front of you…kind of like one of those arrogant sled dogs, I suppose). I’ve watched dogs yawn when their person asks them to do something; I’m wondering if that’s a sign of boredom? I’ve also seen dogs flick their tongues, could this be defiance like a child saying “nah, nah, nah”?

Dogs are, after all very close to humans emotionally, such that they tend to respond to our actions, especially when they feel threatened. One recent experiment by Alexandra Horowitz  (author and psychology professor), showed the following: The experimenter had the dog-guardian put a treat on the ground and give the dog the “Leave it” cue before exiting the room. Upon returning, the guardian was told the dog ate the treat, even if he hadn’t and sometimes told he was “good”, even though the dog had eaten the treat.  Whether or not the dog had the “guilty” expression was dependent on what the dog-guardian was told, as the guardian’s body language was a sure fire way the dog could tell he was in trouble (even when he hadn’t done anything wrong)!

We do experiments in my home too, but unfortunately I am the unwitting subject of my dog’s trials! I came home one day and I saw, much to my horror, my leather jacket lying on the floor; the pockets had been savagely removed, and the treats, which had been concealed inside, were consumed! What fiendish criminal mind was behind this act, I wondered? My little dog greeted me at the door with a big grin that only a sociopath could muster and happily went on ignoring the poor ailing jacket on the floor. No, I don’t know what he was thinking, but it wasn’t “guilt” for sure.

I went back to watch the video of “Denver the Guilty Dog”  so I could see what the expression of a “normal” dog looks like when he has done something bad.  Well, according to the dog guardians, “Denver has a criminal past, but for the most part Denver is a dog who, from sun up to sun down, lives to please.” 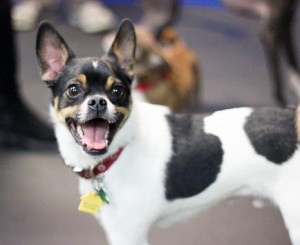 “Please”!  This is another trait that my dog is lacking, but then, what sociopath has a “I want to please you, gene”? 🙂