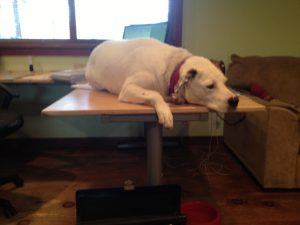 In spite of the various labels commonly assigned to them, dogs do not deliberately set out to make their owners’ lives difficult. Photo: Susan Nilson

I’ve lost count as to how many times I’ve heard that Fido is ‘really naughty,’ ‘he’s doing it deliberately,’ ‘he’s trying to spite me,’ or, if an owner has more than one dog, ‘they’re trying to gang up on me!’ But are these labels in any way helpful? Let’s consider this for a moment.

Ask yourself ‘Why?’ before reacting

The number one point I would like all dog owners to consider when their dog is not responding in the way they would like their dog to respond is ask a simple question – why? Ask this question before reacting by ascribing labels to the dog (‘he’s dumb,’ ‘thick,’ ‘just a dog,’ ‘not as good as the previous dog,’ ‘carrying out traits characteristic of certain breed,’ etc.) or worse responding with punishment – think first.

Dogs do not plan to ruin our day!

Contrary to what may sometimes be thought, dogs do not lie in their baskets at night rubbing their paws with glee, planning to leap all over your house guest’s lovely new outfit at the following night’s dinner or ruin your brand new carpet you’ve been waiting for, for weeks.  Yes, we all know that these things are infuriating, but ask yourself why did they happen, how could they have been prevented, what could have been done – before blaming the dog.  Whilst dogs are undeniably intelligent and there is a lot of research being carried out currently to determine the extent of this intelligence, they lack the mental capacity for deliberate pre-planned delinquency.

So, if your dog is not responding as you’d hoped and you are asking why?  What could be the reasons?  Of course, they are multitudinous, but lets have a look at some of the most common ones:

Extremely common of course.  If you’re asking your dog to come back to you in the house/garden, and he comes most of the time, then he doesn’t when he’s in the park/woods/beach – why? There’s simply too much competition for your attention. Remember that a dog is highly driven not only by the visuals but by audible and olfactory senses.  Whilst you may not see distractions around you, your dog will hear, smell, taste a whole different world.  Don’t get cross with him, understand that you need to drop the level of competing distraction for a little while and train at this level, get a good response, then increase the competition.

Clarity of your cue

What’s your cue?  Many times, I will simply observe owners with their dogs for a good while prior to doing anything with them.  If you and your family have different cue words, use variations of the cue or don’t have a cue at all (e.g. just use the dog’s name and expect him to return), herein lies the problem.  Be consistent.  If you use hand signals, be clear..do you struggle if people don’t speak clearly to you?  It’s the same for your dog.

Many people don’t realise that their dog is stressed. I’m not going to list all the subtle and often overlooked symptoms of stress here (they can be easily found elsewhere), but pressurizing your dog, placing your dog in noisy/busy/populated contexts for the temperament of the individual, punishment etc. can all cause stress and suppress learning.

Does your dog simply not understand?  Many dogs will engage in displacement behaviour when they simply don’t know what you’re asking them to do – this is then often termed ‘messing around’… fiddling around, scratching the ground, scratching a ‘non-itch’, shaking etc.  Young dogs can become confused if you are unclear in presenting cues, mixing cues or become cross if the dog does not respond fast enough for instance.  Give the dog time to think.

Sometimes if you are teaching the dog a new behaviour straight after an old one, the memory of the old behaviour will block the learning of the new one and the dog may have difficulty performing as you’d hoped. Consider for example asking the dog to ‘finish’ to the right for a week or so – she performs it great.   Now you want her to ‘finish’ to the left and she has trouble and goes to the right several times – she’s not stupid, but her primary learning interferes with the new learning – that’s all.

Taking the example above about the carpet and house guests.  If you have an exuberant dog and she ingrains garden mud all over the new white carpet or bowls over the house guest at your dinner party – really you should keep each separate and begin behavioural training in response substitution techniques.  Your dog is not doing anything wrong here but having a wild old time and enthusiastically greeting a new friend – she does not know you have a new carpet or that your house guest is in her finery, it is up to you to teach appropriate meetings.

There are a huge array of examples here.  The most common I hear include rounding up and nipping of children and other animals in the household by Border Collies, chasing small pets by sight hounds, lack of poor recall due to intense scent drive in gundog breeds.  Now these dogs are carrying out innate and instinctive behavioural drives – it’s normal but in some cases out of context and therefore does become inappropriate.  In these cases we must improve enrichment and engage in behaviour modification techniques to ensure the issues become ‘human appropriate’.

I see this many times, particularly with owners who’ve selected food as a reinforcement. Due to an owner’s obvious desire to detach their dog from food treats, they will often move quickly from rewarding every response to not rewarding.  This usually equals no response and a frustrated owner.  The reason here is that the dog’s behaviour has been rewarded on a continuous schedule and now is no longer reinforced and has become extinct. In order to maintain a response, owners must gradually alter the schedule of reinforcement, rewarding every response, then every 2,4,6 for example then eventually phase out.

So, as has been seen, there are multiple reasons why a dog may not respond as we hope.  It is sometimes frustrating when this happens, but we must stop and think first before acting.  This is not only of course much better for our relationship with our dog, but gives us a much greater insight into the workings of dog behaviour.