New Bird on the Block

May 5, 2022 | Animal Behavior, BARKS from the Guild, Pet Guardians, Training 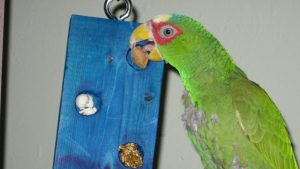 Over the years I have introduced several parrots into my flock of companion birds. During this time I have found there are some things that should be done early on to help shape the bird into a good companion, while also giving him time and respecting his boundaries.

I have talked to a lot of people who were disappointed that their new bird’s behavior changed after a couple of months in their home. Some people call this a “honeymoon period.” I do not use that term as I feel it implies the bird is purposely exhibiting good behavior only to intentionally change for the worse.

Depending on the species of bird you are bringing into your family, how you interact with them and manage them during the first few months is critical.

Many species of parrots can live a very long time, so a few days or weeks is actually a fairly short period of time for them. Compared to dogs and cats, parrots generally take a bit longer to settle in and become really comfortable.

It is important to realize that you should always do your best not to push the bird to interact. If your newly adopted bird is shy, nervous or defensive and does not want to be handled, it is wise to allow him as much time as he needs to get used to you.

Let him set the pace of things so that you can set up the relationship to be one where he trusts you and understands that you respect his boundaries and limitations.

Taking your time in the beginning can do a lot for your long-term relationship. Take advantage of this time to simply observe your bird and get to know him. Understanding his body language will go a long way in helping you have a strong relationship with him.

Birds can be loud. Depending on the species they can be unbelievably loud and this is, in fact, why many of them lose their homes. Some vocalizing is completely normal for all birds; therefore, you should not try to stop all vocalization.

However, constant screaming or loud vocalizing is not normal and can usually be modified. It is easier to change this behavior when it first begins, before a strong reinforcement history has been established.

Sometimes birds are quieter in new homes or environments when they are first checking things out, settling in, and simply observing their new surroundings. Take advantage of this fact and condition your bird to remain soft-spoken.

When people bring home a newly-adopted adult or baby bird it is natural for the new owners to want to hold, dote on and spend time with him. The problem with this is that they may not always have quite as much time to spend with him later on and if they do that a lot in the beginning the bird is likely to get used to that routine.

It is important to teach a companion bird early on how to play independently. This can be done by offering the bird toys, different forms of enrichment, and foraging opportunities inside and outside of the cage.

Have a few different play areas such as a hanging perch (for instance a boing or a rope) and a tree in addition to the bird’s cage. Load them with fun things for the bird to do. Periodically reinforce the behavior of playing independently.

Since you will want to teach new behaviors and reinforce things you like, it is critical that you figure out what your bird finds enjoyable. You will use those things to reinforce desirable behavior. When you offer a variety of food, see what the bird chooses first. You can then use that as a special treat just for training.

As you get to know your bird you will begin to learn if he also enjoys things such as being petted or scratched, certain toys or treats, clapping, talking or other attention from you. Take note of these things, as you can use them as rewards in the future.

Stationing in the Cage

This is a helpful skill for all birds but particularly for those who are defensive around their cages. Stationing simply means that you train the bird to go to a specific spot when you ask him to.

For instance, when Joey, my White Capped Pionus, first came to live with me he was very defensive around his cage and would lunge and smack his beak into the cage bars. I taught him to station on a perch by luring him with food and then giving him a piece of a grape every time he then sat on it.

Once he was easily doing this, I would say “perch” and then lure him. In no time he was going directly to his station when I said “perch.” This allowed me to change his food and water, clean his cage and work around his cage.

I purposely would give larger pieces of grape so that it kept him busy for a while. One of the useful things about station training is that it allows you to train easily with your bird inside the cage, which is important when dealing with parrots who may attempt to bite.

Targeting is simply teaching the bird to follow a target. You can use something like a chopstick, a pen or even your finger. Once you have chosen a target, offer a treat for looking at it. Once he looks at it easily, wait for him to move toward it and reinforce that.

Continue to build on the behavior until he follows the target stick to wherever you move it.

Stepping Up When Asked

If you have adopted a baby bird or an adult bird who steps up, it is still a good idea to reinforce stepping up. I always ask a bird, “Do you want to step up?” as a question that the bird is permitted to say “no” to.

With new birds, I find out what their favorite treats are and then give them one every time they step up even if they will step up without it. I started doing this when I discovered that so many birds step up readily at first but then stop after a period of time.

Some people feel that because you are holding the bird after he steps up that you have reinforced him. However, I never assume that any bird has an interest in being with me until I have spent some time developing a relationship with him.

Eventually, being held may indeed be a reinforcer for stepping up, but until I feel strongly that the bird feels that way about me I use food to reinforce step ups.

While I do have a fairly consistent routine with my birds, I am very careful to occasionally change things.

Life changes and I do not want to have a routine so rigid that my birds cannot handle it or are thrown off if their routine is changed.

Feed around the same time but not exactly the same time. Use different bowls. Hold the bird at different times of the day. Make slight changes now so he does not become frustrated or upset when things vary.

A Variety of Healthy Foods

Feeding a diet that consists of a variety of healthy foods is one of the best things you can do for your bird. My birds eat a combination of pellets, seed or nutriberries and an ever-changing fresh food offering.

I make chops and mashes, muffins and breads or sometimes just cut up fresh vegetables and fruits, pastas, rice and so much more.

Baby birds who were raised on fresh foods should readily take to them but older birds and even young birds who are not used to fresh foods may take some time to try them.

Do not give up: keep offering. Sometimes making muffins or mash and sprinkling a little seed on top is enough encouragement.

This article was first published in BARKS from the Guild, September 2015, pp.50-52

Vicki Ronchette CPDT CAP2 is the owner of Braveheart Dog Training and the author of Positive Training for Show Dogs – Building a Relationship for Success. She is a raptor handler with Native Bird Connections and lives in Northern California.