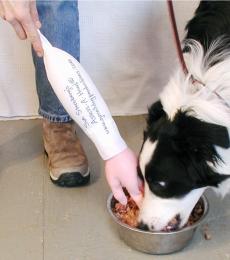 A recent New York Times article discussed growing skepticism of a common test that supposedly assesses dogs’ aggressive tendencies. The test uses a fake hand, called an Assess-A-Hand, to “determine” whether a dog will be aggressive in protecting his food bowl. The idea is to identify dangerously aggressive dogs in shelters.

In many cases, this is done so that aggressive dogs could be “euthanized,” leaving scarce resources for the more adoptable, non-aggressive dogs. However, the concept of culling dangerously aggressive dogs is tough to put into practice. The Assess-A-Hand test, like any test, is only as good as the person who administers it. And even in the most skilled hands, it only offers a single snapshot of a dog’s behavior, not a definitive assessment of his temperament.

I’ve watched a lot of people administer this and other temperament tests. I’ve always thought that this particular test was poorly designed because so much depends on the person holding the Hand. The idea behind it is fine: If a dog reacts aggressively when he sees a hand reaching toward his food or a favorite toy, that dog could be dangerous around unpredictable children; therefore that dog should not be placed in a family with children.

So what’s the problem?

Temperament testing is often done on intake, so within a day or two of the dog arriving at the shelter. That dog is hardly at his best. Shelters are stressful places. Many dogs, even the least aggressive sweethearts, become defensive of their food when there are other dogs nearby. They might eat faster, they might curl a lip or growl at another dog who approaches, and they might even growl at a person who approaches. The same dogs, in environments where there are no other dogs, or where they feel relaxed and comfortable, might not care who approaches their food.

An even bigger problem is that people administer the test very differently.

When I trained service dog puppies, my volunteer helpers and I often did what we called “food bowl exercises.” The idea was to get the puppies used to the idea that people might be around when they were eating and that was OK. Better than OK. It meant that they got tasty surprises. The goal was to ensure that these (nonaggressive) puppies would react to hands near their food bowls with joy and excitement. What we did was add special treats, like small pieces of chicken or other highly desirable foods, to the dog’s bowl. To do so, we’d put our hand in or near the bowl. To be fair, I very rarely do this with my own dogs, and I don’t really see many reasons to bother a dog while he’s eating. But in a household with children, well, anything can happen, so it’s good to know how the dog might react.

If I were doing an Assess-A-Hand test, I might behave similarly to how I worked with the puppies. I might put the hand at the edge of the dog’s bowl or poke it into the bowl. I might let it bump the dog gently. I might try to put a piece of food in the hand and drop the food into the dog’s bowl. That might give me some insight into how reactive the dog is while eating. (Notice all the “might”s? No guarantees …)

I’ve seen people administer the test that way. I’ve also see people use the hand to harass the dog, including people who kept escalating the pushing, poking, and bumping, including moving the bowl out of the dog’s reach, until they got a reaction. If the tester is persistent and mean enough, she can get a reaction from even the sweetest dog. Then, the instant they provoked a reaction, they labeled the dog dangerously aggressive. That’s not fair. It’s also not accurate.

The flip side of this problem is the dog who does not react during the food bowl test but who actually is aggressive — around other things, perhaps, not around food. The dog’s indifference to the hand at testing can (and has) given shelter personnel a false sense of confidence in the dog’s even temperament … until something else provokes the dog into a rage reaction (possibly after the dog has been adopted).

The article quotes one staff person as saying they’d thought of the test as a “magic bullet.” When it comes to dogs, there’s no such thing. Another staffer talks about how “anxious adopters” need to “know what they’re getting.” They want assurance that this shelter dog of mysterious background and poor socialization will be the perfect, gentle companion, no matter what they do to it.

That is absurd. No test can tell you that.

It cannot be over-emphasized: Dogs are individuals. Like many of us, their reactions to specific situations vary. Even within the same individual, the response might be different in the morning, at night, in different places, when the dog is well rested and comfortable versus starving, tired, achy, scared … One test can never definitively tell you whether a dog is aggressive or safe around children. While I fully understand the desire to be able to know that, quickly and inexpensively, the truth is: That is not possible.

The hard truth is that people need to spend time with a dog to know what he’s like. Even then, it’s a guessing game. There will never be a way to guarantee that any dog you adopt from a shelter will never bite anyone. There are no guarantees with well-socialized purebred puppies either. The best way to be safe around dogs is to use common sense and not provoke them. Learn to read their body language. Teach children how to treat dogs and when to leave them alone.

The Assess-A-Hand has its place, but expecting it, or any other test, to be that elusive magic bullet is unrealistic, unfair, and unsafe.