On the Danger of Dog Collars

There’s a debate raging in Sweden about whether choke collars are potentially dangerous to dogs.

Several influential dog coaches on TV use and recommend them, other experienced dog professionals argue against them. It’s currently causing all kinds of shock waves to ripple across social media, which inspired me for a blog post.

I’m guessing that in some people’s eyes, this disqualifies me from having an opinion on the subject.

In my view, that just gives me a different perspective. Dog-naïve people, like me, look at dogs and see behaviour without automatically interpreting what it means.

We also look at dog owners and wonder why they do what they do.

We carry no baggage, as it were. We have a clean slate with regards to How One Should Handle Dogs.

In contrast, and I realize this is a sweeping generalization that may offend some readers: I see many dog owners who don’t question what they do, they just continue doing it – because that’s what they learned as a child. They continue perpetuating behavior they’ve learned by observing others interacting with dogs.

Yep. Grow up surrounded by people eating crayfish wearing funny hats, singing silly songs, and drinking alcohol, and you most likely will adopt that habit.

Just ask any person from Sweden.

Norms are not questioned, they’re typically just passed on to the next generation.

Another such inherited behaviour is putting choke collars on dogs: if daddy did it, chances are, you will too.

So, in this post I’m offering the fresh perspective: a non-dog-owner’s take on choke collars.

As someone who’s never owned a dog trying to somewhat impartially examine arguments for or against choke collars, I would start out with these questions:

WHAT ARE THE POTENTIAL BENEFITS OF CHOKE COLLARS?

Choke collars can be used to deliver corrections to dogs.

Sorry for not getting further than the first topic before taking sides. I must say that I find it very disturbing that people have manufactured devices with the sole intention of inducing pain and discomfort in order to change behavior; it’s hard for me to remain neutral.

I may not know dogs, but I understand behaviour.

Punishment is problematic, to say the least, and I’m resisting the temptation to write more on this topic in this post. After all, today’s post is about collars, not punishment.

Deep breath, back to the task at hand.

WHAT ARE THE POTENTIAL DRAWBACKS OF CHOKE COLLARS?

Since dog physiology is not my topic, I enlisted the help of Google Scholar in tracking down some articles studying potential pathological effects of choke collars.

Incidentally, the first article on choke collars I found described severe brain damage in a dog that had to be euthanized because his owner had… oh, you don’t want to know. I’m assuming that’s not how most dog owners use choke collars.

I’m assuming that most dog owners don’t have the intention of physically hurting their dogs when using choke collars.

I found a blog post by concerned veterinarian Peter Dobias, speculating that since collars put pressure on the thyroid gland at the neck, this could explain the range of thyroid symptoms seen in breeds that pull a lot on the leash, including skin problems, ear infections and organ failure. He also talks about severe whiplash injuries seen in the clinic, apparently caused by collar use.

In a Swedish study of 400 ordinary dogs, back anomalies were found in 63% of dogs. Among dogs that had neck injuries, 91% had been exposed to harsh jerks on the leash, or had a long history of pulling and straining.  It was concluded that leash corrections, the collared dog charging ahead, or a tethered dog hitting the end of a solid line, may inflict spinal injury.

I’m assuming that most dog owners don’t have the intention of physically hurting their dogs when using ordinary collars.

The problem is not choke collars, specifically.

The problem is collars.

There are many types of injuries that could occur, and seemingly just after a few unfortunate jerks to the leash – whether caused by the dog charging forward or by the handler popping the leash, choke collar or no choke collar.

It turns out I’m not so naïve, after all. And no wonder, I’ve grown up seeing collared dogs for more years than I care to remember. I’ve become desensitized and numb to collared dogs: it’s the norm. And it takes knowledge to question norms. I’ve cringed when seeing dogs charge forward until they’re suddenly jolted back by a taut leash, I’ve thought “ouch, that must have hurt!”, but I didn’t realize that they could sustain physical damage. I didn’t recognize that many dogs have neck and spinal injuries, unknown to their owners.

I head over to my tribe of dog trainer nerds on Facebook and put up a quick poll.

Collars or harnesses, I ask.

Within five hours twenty of them have obligingly answered. The majority of these dog pros don’t use collars when leash walking their dogs. The ones that do make a point of stating that you need a very good level of cooperation in order to use collars.

It takes knowledge to question norms.

As a non-dog person, I thought ordinary collars were reasonably safe.

My fellow professional dog trainer buddies know better, and don’t use them – or are extremely careful when using collars.

So are there other ways to get dogs to stop pulling on the leash? At this point in my quest, my original questions change.

This is really a two-part topic: it’s about what type of equipment to choose, and how you teach your dog to do what suits you, such as walk on a loose leash.

ARE THERE ALTERNATIVES TO COLLARS?

As to equipment, as far as I can tell, none of the problems associated with collars have been documented with harnesses. So, changing from collars to harnesses should remove many, if not all, of the risks mentioned above, since they distribute the pressure away from the sensitive neck.

Dog owners may question my choice of picture. Well, time for a disclaimer.

Is that a good type of harness? I don’t know.

Is it properly fitted? I don’t know.

What breed is that? No idea.

I chose an image to illustrate a concept rather than recommend a specific device.

Which would be the best harnesses for specific breeds or personalities? Tell us in the comment’s section, below.

HOW DO YOU TEACH YOUR DOG NOT TO PULL ON THE LEASH?

Here I’m back on safe ground.

I may not be a dog owner, and I’m unfamiliar with collars and harnesses, but I understand animal training.

As to how to teach your dog to stop pulling, there are alternatives to corrections, leash popping and jerking the dog.

Animals do what works.

In this short video, Emily Larham at Dogmantics (aka kikopup) illustrates several great principles and tactics of how to train Loose Leash Walking, and towards the end of the video you’ll see her drop the leashes and her two dogs remaining with her – even as she changes direction.

Some of the techniques Emily uses:

To this I might add a twist: when training indoors, teach the dog to stay next to you and follow you without a leash, first. This minimizes the risk of pressure on the leash later: the dog already knows what to do. 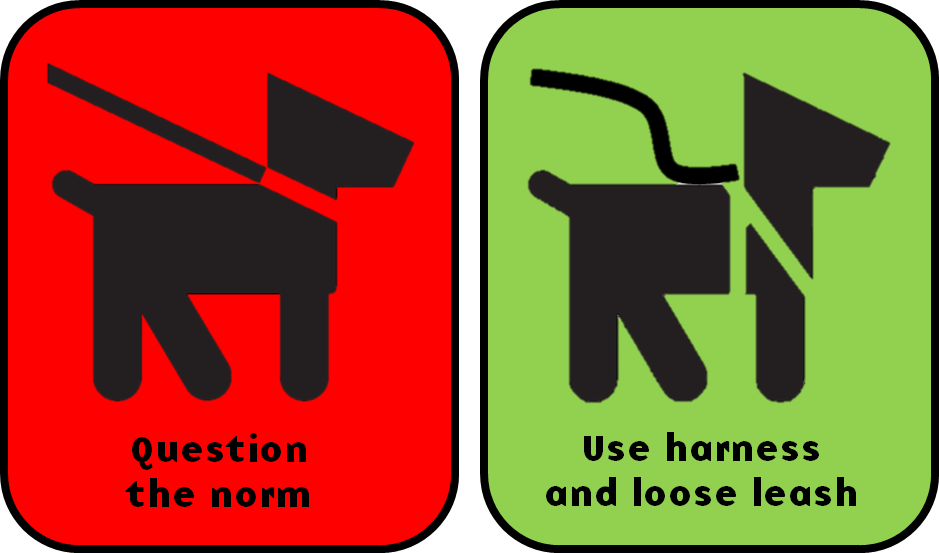 USE HARNESSES – AND TRAIN YOUR DOG

This started out as a blog post about choke collars, but in the course of writing it I found evidence that any type of neck collar on a leash might potentially cause irreparable damage to dogs.

Rather, harnesses are seemingly a safer option.

This blog post was written in 2016, and updating it in October 2019 I did a quick search for new articles published on this topic.

One study found that there was no observable behavioural difference in dogs used to walking with halters and then evaluated after adapting to collars for a week, or vice versa. However, the dogs typically wearing collars had lower ear positions than those wearing harnesses, possibly indicating a stress response.

It takes knowledge to question norms. I know now – do you?

Note from the Author: I teach online courses about how to get happy animals that thrive with humans, and foundational as well as advanced animal training going into extreme nerdy detail. Check out the courses!

About the Author
Karolina Westlund helps pet owners and people working professionally with animals to get happier, reasonably well behaved animals that thrive in the care of humans. She teaches animal behaviour management through blog posts, the odd Facebook live session or webinar, as well as more extensive online courses. She is an associate professor of Ethology at Stockholm University, Sweden and sometimes publishes scientific articles related to enrichment, animal training, and well-being. She will be the keynote speaker at PPG’s sixth annual summit in Kanab, Utah on September 20-25, 2020.