What You Think Is One Dog’s Punishment May Be Another Dog’s Fun Game! 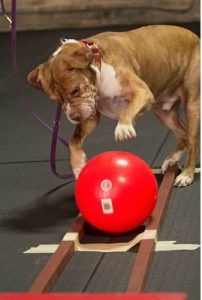 I was first introduced to a positive reinforcement instructor many years ago when I adopted my shelter dog, Freddie, an adolescent dog who was very enthused about EVERYTHING! As the instructor explained how to reinforce our dogs, and even as I was seeing results, what I really wanted to hear was how we were going to punish our dogs when they did “bad” behaviors. While I look back on that kind of thinking with laughter, it got me thinking about how humans are “wired” to want to correct a “bad” behavior, but rarely want to acknowledge and reward the “good” behavior.

I remember attending a training workshop with a well known dog trainer/author who had come to town. As I mentioned, Freddie, was a very exuberant guy and while he would not harm another animal, but show him a stuffed toy (or any other major distraction) and he was off the charts excited. I wanted to work one on one with this trainer so she could show me how to change this behavior. We began outdoors where she held out a toy as we began walking toward her from about a 30’ distance. I was instructed to stop him every time he lunged, and back him up, so that he would lose distance (similar to a penalty in football). Well this trainer may have known most dogs, but she did not know Freddie and when our half-hour session was over, we had backed up to the next county, or so it felt like that, but Freddie’s excited lunging and barking continued, as this became a fun game for him!

On another occasion Freddie and I were visiting a friend when suddenly her father walked in the room. Before I could prevent Freddie from enthusiastically greeting this new human, Freddie jumped on him, however he was immediately meet with a swift knee to his chest! “That’s the way to stop him!” the dad proudly said. But he didn’t know Freddie, and within seconds, Freddie was right back at him, engaging in a very fun game of roughhousing, even with this very outdated and aversive method.

As I gained experience and a lot of perspective on training and behavior, I came to see that it isn’t about punishing the animal, (negative or positive), but rather it’s about reinforcing the animal when he’s doing the right behavior and to the best of your ability set up the situation so that the animal isn’t given a chance to do the wrong behavior. And while the true definition of punishment is to lessen or weaken a behavior so that it is less likely to occur in the future, too often the environmental reinforcers are much stronger than the punishers that we deliver and in the process of trying to find what works, the animal can turn this into a game.

Taking the example of the dog jumping up for attention, just removing the dog or having the person walk away is not enough of a punisher to change the dog’s very excited state of mind, and kicking the dog is painful, could also do physical or emotional harm or in Freddie’s case, it just amped up his behavior.

“Punishment,” to my way of thinking, should be no more than an interrupter, a contrast, if you will, between lots of reinforcement and then suddenly no reinforcement. So for example, had I been prepared, I would have had Freddie leashed and out of strike-range from the door, so when my friend’s dad walked in and upon Freddie noticing the visitor, I would have given Freddie a high-value treat and repeated the sequence several times without decreasing the distance between Freddie and the dad. Say Freddie sat calmly for 4 repetitions of look at the dad, get a treat and on the 5th repetition, he lunged. With the leash, I could have removed Freddie but more important, the food reinforcement would have stopped (until we began more repetitions of reinforcing him for doing the right behavior). Most people, put the emphasis on removing the dog, but that game can go on for a very long time. The high value food is what tells the dog what to do which in this case is look at the visitor and keep all four paws on the floor. Over time, with the pairing of visitor and treat delivery, most dogs will use the visitor as the visual cue to turn and look back at the handler for reinforcement. Once the dog understands and is offering a different response to visitors, the visitor can then calmly pet the dog. (In the early stages of learning, I like to feed the dog while the visitor is petting the dog to reinforce the 4 paws on the floor behavior.)

Having a dog like Freddie, gave me plenty of opportunities to set him up to receive reinforcers. One such occasion was with an elderly neighbor whom we would see every day on our walks. This guy loved to pet Freddie’s head by “pounding” on it, and even when I’d ask him to please pet Freddie under the chin, he’d continue. This of course got Freddie excited and mouthy, so what I learned to do instead was give Freddie treats as the neighbor, “petted” Freddie’s head. And the result was that Freddie would look at the neighbor and look back at me as if to say, “Oh boy here comes the ‘hammer-hand’ and I get lots of treats…life is good!”.

Freddie is gone now, but because of him, I’ve learned to successfully modify most of my clients’ dogs behavior using this technique.

I recently adopted an adolescent cat, named Flint, and I have an eerie feeling he is Freddie come back to teach me more lessons. The other day, while preparing food, Flint jumped on the counter, so I put him on the floor. Two seconds later he was on the counter. He repeated this behavior for a few more times, when suddenly it occurred to me, “Hey trainer, how about a new game plan? Well, the new strategy worked like a charm: The cat sees the counter and he receives reinforcement on the floor. It took just a few repetitions of reinforcement to communicate what I wanted him to do. I can assure you that with his tenacity, just removing him from the counter would not have been successful, because if he really is Freddie, he’s played this game before!

I think we humans need to fight our first impulse to look for “bad” behavior to punish, and instead focus on looking for “good” behavior to reinforce over and over. By the way, if you think that positive reinforcement is only for the animal, think again. When humans are engaged in looking for ways to punish their animals, it changes their mindset and each time the animal doesn’t respond to the punisher can be very frustrating for the teacher, not to mention, the amount of energy it takes to think up ways to implement.

Of the many things I learned from Freddie, one dog’s punishment is another dog’s fun game, and not one that any pet-parent should be playing!