Onset of Noise Sensitivity Might Indicate Pain in Dogs 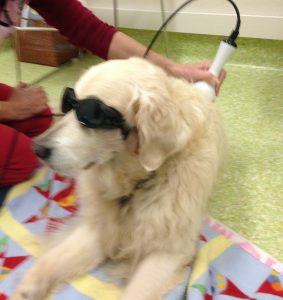 Laser therapy can help relieve pain from arthritis or injuries.

Older dogs who develop noise sensitivity might be in pain. Other behavior changes, like a normally friendly dog showing aggression to children or dogs, have long been regarded as potential indicators of pain. But a study published in February might be the first to make the connection between the onset of noise sensitivity and pain.

The researchers looked at two groups of dogs. The group they termed “clinical” had developed noise sensitivity and had diagnosed painful musculoskeletal problems. A “control” group had noise sensitivity but no known painful conditions.

One difference was immediately clear: The age of onset of noise sensitivity in the clinical group was four years later than in the control group. The age and gender mix of the dogs was similar in both groups, as were their responses to noises. Their responses and the triggers — described as loud or sudden noises — were reported by the dogs’ owners.

All but one dog in the clinical group was treated with analgesics for pain (one owner declined treatment), and all treated dogs showed improvement in their response to noise. Several dogs in both groups showed avoidance of new situations and a majority in each group showed social avoidance to humans, dogs, or both.

Prior to the study, most dogs in both groups had been treated with anti-anxiety pheromones, supplements, or medications

The researchers suggest that the behavior changes and onset of noise sensitivity could indicate the onset of painful conditions. Stiffening or startling in response to a sudden noise, or the anticipation of a noisy environment could cause painful movements. The dog could start to associate specific situations with that pain and avoid those situations. A similar association could result in avoiding people, especially children, or other dogs; contact might be painful.

Dog owners and dog professionals have not always made this connection. The fact that many owners sought behavior modification or anti-anxiety treatments, rather than pain medication, is the result. Dogs often hide pain, but these other behavior changes could be a message that owners could heed — and in doing so, improve their dogs’ quality of life.