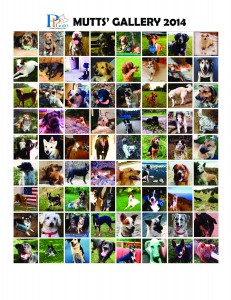 Tampa, FL – The Pet Professional Guild (PPG) is celebrating National Mutt Day with the creation of its very own Mutts’ Gallery. The gallery features photos of PPG supporters’ mutts along with incredible tales of their rescues, their achievements once given a second chance in life and the impact they have had on their owners’ lives.

“There are countless tales of the heroics of mixed breed dogs over the centuries,” said Niki Tudge, PPG President and Founder. “In our PPG Mutts Gallery alone there are stories of mutts rescued off the streets and highways of the Middle East, Asia, Europe, Africa and North America; mutts picked up as strays with bullet wounds, serious injuries – in one case leading to amputation – or signs of physical abuse; mutts who were emaciated, blind, deaf, sick, had rotten teeth or terrible skin infections; mutts rescued from the meat trade; tiny mutts who were dumped in trash cans; mutts whose owners loved them but were unable to adequately care for them; mutts who were left alone when their owners died; mutts with physical challenges; mutts from puppy mills and terrified mutts who were just abandoned over and over again for various behavioral issues.

“With the right owners, all these dogs have blossomed into much-loved family pets. Many of them now compete in dog sports or nose work; some are award-winning trick dogs and know how to skateboard or fetch a beer from the fridge. Others have become St John’s Ambulance therapy dogs, first aid partners, prison therapy dogs or therapy dogs for children. Many of them too have inspired their owners to embark on a change of career and retrain as a dog trainer or animal behavior professional.”

National Mutt Day occurs twice a year – on 31 July and 2 December – to raise awareness of the plight of the millions of mixed breed dogs currently facing euthanasia in shelters around the nation. According to the founder, Pet Lifestyle Expert Colleen Paige, the goal of the event is to educate the public about the sea of mixed breed dogs desperately awaiting new homes and, coast to coast, to save 10,000 of these dogs this year. Mixed breeds are just as able to perform the duties of pure bred dogs – such as bomb and drug sniffing, search and rescue, seizure alert and guiding the blind – and are often plucked from shelters by savvy trainers precisely for this purpose. One of the USA’s most famous movie dogs, Benji, was a mixed breed spaniel/terrier adopted from the Burbank Animal Shelter in Los Angeles. Another, Old Yeller, was a Labrador retriever/mastiff cross adopted from the Van Nuys Animal Shelter, also in Los Angeles.

The Pet Professional Guild’s Mutts’ Gallery features a collection of captivating photos of PPG members’ mutts along with incredible tales of their rescues and the impact they have had on their owners’ lives.

National Mutt Day was created in 2005 by Celebrity Pet Expert and Animal Welfare Advocate, Colleen Paige, and is celebrated twice each year, on 31 July and 2 December. National Mutt Day’s goal is to embrace, save and celebrate mixed breed dogs, who make up the largest percentage of dogs euthanized in US shelters. This is in part at least due to constant over-breeding and the public desire for “designer dogs” and pure bred puppies that are sold to pet stores and supplied by puppy mills that often produce ill and neglected animals.