The Pet Professional Guild (PPG) fully supports and applauds the Government of the United Kingdom’s decision to implement a nationwide ban on the use of remote control electric shock collars for the training, management, and care for pets. Further, PPG is in full agreement with the U.K. Kennel Club (2018) that “the use of electric shock collars as a training method has a long term negative welfare impact on dogs.”

There is a growing body of peer-reviewed, scientific research that shows, whether discussing dogs, humans, dolphins or elephants, that electric shock as a form of training to teach or correct a behavior is ineffective at best, and physically and psychologically damaging at worst. States renowned board certified animal behaviorist and veterinarian, Dr. Karen Overall (2005): “There are now terrific scientific and research data that show the harm that shock collars can do behaviorally.”

It is PPG’s view that pets need to be well-socialized and mentally and physically healthy if a productive and safe relationship for all members of their family and the public at large is to be ensured. As such, PPG urges all parties involved in determining new legislation to focus first on education, operational standards and modern, humane methods. Government has a responsibility to implement effective public health measures that increase the information available to the public and decision makers, protect people from harm, promote health, and create environments that support healthy behaviors (Friedman, 2010). 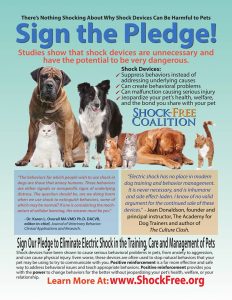 Humane, modern animal training relies on science-based protocols. According to Friedman (2010), punishment does not teach learners “what to do instead of the problem behavior.” Nor does it “teach caregivers how to teach alternative behaviors.” Friedman (2010). It is absolutely baffling, then, that professional dog trainers and canine behavior consultants currently have no legal responsibility whatsoever to disclose any information to their clients or the general public regarding the methods they use. At present, the only obligation is an ethical one, which, sadly, some elect not to acknowledge. This can be and, indeed, is very misleading to unsuspecting pet owners who have no knowledge of the pet industry’s lack of standards and regulation, or the differences between training methods and equipment. In many cases, pet owners only find out about these differences – and the fallout associated with them – when they find themselves encountering behavior problems caused by the use of outdated aversive techniques and equipment.

Open information equates to transparency, which is an enormously important concept in the business of pet training and behavior consulting. This is – or should be – an environment founded on the principles of behavioral science, where practitioners are working with living beings, both human and animal.

The new move by the UK government falls in line with PPG’s recently launched Shock-Free Coalition, a global advocacy campaign which aims to end the practice of using electric shock in animal training, build a strong and broad movement committed to eliminating shock devices from the supply chain, and create transparency on the methods used for consumers seeking professional advice on pet behavior or training issues. The Shock-Free Coalition believes that pets have an intrinsic right to be treated humanely, to have each of their individual needs met, and to live in a safe, enriched environment free from force, pain and fear. Supporters of the Shock-Free Coalition consider it to be their responsibility and utmost obligation to be vigilant, to educate, to remain engaged and work toward eliminating shock as a permissible tool so it is never considered a viable option in the training, management and care of pets.

Given that the pet training industry is “entirely unregulated at present, anyone can tout themselves as a trainer or behavior consultant regardless of education, skill, knowledge or experience – or lack thereof. As a result, those who call themselves dog trainers, or the ever popular term ‘dog whisperers,’ may still be utilizing outdated punitive methods, such as disc throwing, loud correctional ‘no’s,’ devices and methods that work through eliciting a ‘startle response,’ and/or an alarm reaction to prevent, barking, jumping up, growling or any other problematic behavior, and, in some cases, more extreme tools such as electric shock collars, choke chains and prong collars. All of these are, sadly, still at large. They are training tools that, by design, have one purpose: to reduce or stop behavior through pain and fear. This, as opposed to a modern, constructional approach where operant behaviors are built, and problematic emotional reactions are changed via positive reinforcement and counterconditioning protocols based on the science of behavior.” (Pet Professional Guild, 2016).

PPG is an international member association for pet professionals who use force-free training methods only and holds its members to a very high standard in terms of ethics, protocols and transparency. PPG members are committed to humane, scientific and effective training, care and management protocols. They never use – indeed, never have any need to use – correction-based training, equipment and/or aversive stimuli for the care, management or training of pets, and the foundation of their work is always to do no harm.

Overall, K. (2005). An open letter from Dr. Karen Overall regarding the use of shock collars. Available at: https://www.joelwalton.com/shockcollars.html

Pet Professional Guild. (2017). An Open Letter to County Commissioners – Consumer Transparency re: the Methods Used in Animal Training, Care and Management Will Protect Pets, Their Owners, Local Residents and the Public at Large. Available at: https://petprofessionalguild.com/Open-Letter-To-County-Commissioners

Pet Professional Guild. (2017). Position Statement on the Use of Shock in Animal Training. Available at: https://petprofessionalguild.com/Advocacy-Shock-Statement