I wanted to tell you about a client that I have been working with for a little while now that has been absolutely wonderful and of course, the Pet Tutor was my hero in this case! 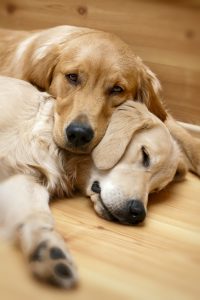 The Pet Tutor helped Takoda and Sage overcome their anxiety when their owner was preparing to leave the house © Can Stock Photo Inc./pitrs

The client contacted me about separation anxiety however upon further investigation it really wasn’t quite separation anxiety, but more anxiety surrounding the guardians leaving the house, particularly Mom. Once gone, the dog in question was a little bit stressed, but not to the point that I was overly concerned so in fact it was mostly about the exiting that caused the extreme anxiety. There are two dogs in the family (Takoda and Sage) and Takoda is the one that was primarily experiencing the issue (young 8 month old lab) but Sage would then get worked up and together they would play off each other and complete mayhem would ensue!! Takoda would jump and circle frantically and bite Mom pretty hard (not aggressively, but with considerable determination out of anxiety), As a result Mom’s arms were utterly covered in bruises. This would happen every single time that they would try and exit the door for any reason whatsoever, even if just when going to check the mail or take the trash out, let alone if they were actually leaving for real. As you can imagine, it was quite disruptive, upsetting and of course downright painful! The first time I did an online assessment with them, I was downright shocked watching the insanity as the clients merely started approaching the foyer, let alone touching the door or anything like that. Yikes!!

So, I was having some trouble wrapping my head around how to proceed with the training, but alas, because of you and the Pet Tutor I was able to create a gradual and systematic plan for the clients to work on and we have had truly remarkable success. Following my daily written instructions, the client has been doing exercises for almost two months, which they affectionately call their “Tutoring” sessions (cute eh?). We began with literally taking only a step or two toward the exit door and then dispensing. We would toggle back and forth and break that up with the occasional sit for a dispensed treat, and then repeat walking a step or two toward the exit door and dispense. It took a while, but they took to the game as one would expect. As I am sure you can visualize, we had to go quite gradually because there was so much anxiety involved, but eventually they could take several steps toward the door and dispense. In time we were touching the door frame, then jiggling the door knob, then cracking the door open, then stepping out for a mere moment and so forth. Eventually we also had to fold in all manner of pre-departure cues like keys and purses and the like. We are now at the point where the clients can do maybe one or two little warm-ups and then leave for real for work or to take out the trash or whatever they want to with zero issues. IT IS SO COOL!! The Pet Tutor unequivocally saved this couple (and their poor bruised arms) and they are ever so grateful. I don’t know if they will ever necessarily be able to walk out the door without a bit of a warm-up and a dispense or two, but that is certainly no big deal compared to the absolute pandemonium they were previously experiencing.

So, mostly I wanted to share that story with you because I think you should always hear of the cool stuff that people are accomplishing with the Pet Tutor and you should be so proud to know of the tremendous impact your awesome product has on peoples lives (and their dogs lives too, of course)!

P.S. See the picture of Takoda and Sage above just ’cause now that they are no longer wild and reckless they are as sweet as can be.

All my very best to you both,