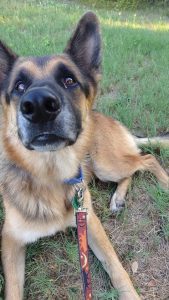 Zeus had a rough start to his days at Fuzzy Friends Rescue in Waco, Texas two years ago.

Early one morning, the staff came in to find that someone had thrown a young German shepherd puppy over the fence. When they did, he had cut his underside on the fence.

The staff at Fuzzy Friends Rescue, being compassionate as they are, took him in, neutered him and doctored his wounds. Then, they found out how high spirited he was.

As a young pup, they couldn’t keep him in a cone and he ran as much as he could run whenever he got the chance.

Once he was all healed up, rescue staff put him in the outside yards with all the other large dogs, but quickly found out that he could scale any fence he put his mind to.

He would escape out of his night pen only to be found running the grounds when the staff got there the next morning.

But Zeus was full of love and he gave it to not only the Fuzzy Friends Rescue staff, but to me as well, a volunteer trainer.

I started visiting him every week. The staff had put him in a day yard, from which he could not escape, and I worked with him to teach him not to try. I taught him how to focus, how to leave it and also how to wait at the door to the day yard until he was given the cue to come through.

He loved working for me and I taught several of the staff how to work with him as well because a dog like Zeus loved a job to do. 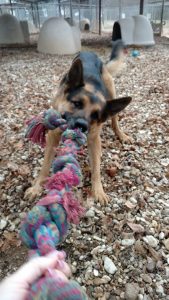 After two years at the rescue, and several adoptions and returns, Zeus finally found his forever home © Kim Jukes

Meanwhile, the Fuzzy Friends Rescue staff had tried to put Zeus with other dogs but had found his social skills to be somewhat lacking. How could they not be, when he had had so little interaction with other dogs in the time he had been there?

Eventually, knowing that he would pay attention to me, I asked one of the rescue staff to help me introduce him to another dog.

We carefully chose another dog to be one that had a calming presence around other dogs.

Although Zeus was VERY excited to get to play with someone else, he did rather well and paid attention when I asked him to stop and take a break.

This was the first time he was being taught how to interact with and engage in healthy play with another dog.

After the session, the staff were able to put him with other dogs, one of whom was a beautiful husky named Athena, on a regular basis for play sessions.

His exuberance gradually lessened and he was able to play appropriately. All Zeus needed was some training and enrichment to be the dog he was destined to be.

After two years at the rescue, and several adoptions and returns, Zeus finally found his forever home and is now doing wonderfully.

*This post is an entry in our Phoenix 2020 Writers’ Competition. All winning, runner up and selected entries are being published here on the BARKS Blog and in upcoming issues of BARKS from the Guild. For a fully immersive educational experience in animal sheltering and rescue, join us at the Pet Professional Guild Annual Summit in Phoenix, Arizona on September 17-21, 2021.*

About the Author
Kim Jukes is the owner and certified dog trainer at People & Pups, LLC in Waco, Texas. She volunteers at Fuzzy Friends Rescue in Waco once a week and assists Akita Rescue of Northwestern Pennsylvania when she can. She also heads the local Meals on Wheels for Pets project that gathers donated toys, treats and other items to make and give goodie bags to Meals on Wheels customers who have pets.