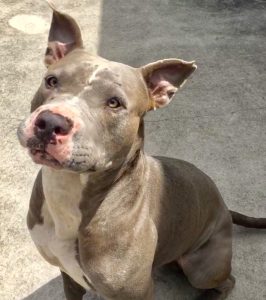 Mookie’s physical and emotional rehabilitation have been challenging, but he is helping other dogs who have been attacked by other dogs and/or have reactivity issues and on his way to becoming a therapy dog © Kim Geisert

The gray and white male pit bull was covered in blood. It was flowing down his face, running from the punctures in his forelegs and neck, and streaming from where the tip of his ear had been severed. He limped toward me, but was otherwise unexpectedly calm, considering the obvious trauma he had just experienced. We were at the neighborhood park, on one of the hottest July days on record, and both of our lives were about to change forever.

At the time, I had been involved with dogs for about 20 years. I started out walking and sitting dogs while working a “real” job, then became an inventory manager for a pet store, while studying everything I could about modern dog training. I worked my way up from assistant trainer to trainer. By this hot summer day, I was employed by a small business with a training facility, teaching private lessons, group classes, and day training sessions.

Throughout those two decades, my husband and I managed to “collect” 15 rescue dogs, mostly “rejects” found running loose in my neighborhood. There was the pit bull mix who had been tied to a sign in a supermarket parking lot; although we tried, we never learned anything else about Jake’s past. Another time at the 7-11, we encountered a deadhead who was following the Grateful Dead around the country (this was in the mid-90s), and he begged us to take his little collie mix. We had her for almost 15 years. A few came from the local shelters. My boxer-pit mix was waiting on the porch one day; my chow-shepherd was ignored and neglected by the neighbors behind me before they gladly gave her to me; we found a dog on the shoulder by the interstate and named him Freeway.

On that July day, I had been with my current company for about six months. I was absolutely loving the challenges of my chosen career but was a bit lonely because my husband had passed a year previously due to cancer. When the gray pittie was spotted at the park down the street, I received an alert from the Nextdoor app. The person who posted about him was watching him but couldn’t keep him and was going to call animal control if no one claimed him by that night.

I was not prepared for the sight of the damage done to this poor dog, clearly the result of another dog or dogs. The Good Samaritan had closed the gate to the park with the dog inside, telling me she was unsure (given his wounds) whether he was fear aggressive or perhaps even vicious. I approached cautiously, tossing high value treats through the fence and coaxing him to approach me. In turns, he showed behavior that was fearful, supplicating, nervous, eager for attention, insecure, friendly, wanting interaction, pleading for help… all in the first three minutes.

I decided to throw caution to the wind. Almost half of the dogs I have had would fall under the “pit bull” umbrella, and having volunteered in the local shelters, I knew that over 90% of dogs in our county shelter are in that category; with dismal chances of being successfully adopted. I trusted my instincts and experience with the breed, and this dog was more than speaking to me, he was shouting for help.

Mookie’s physical and emotional rehabilitation were challenging, but in an exciting, all-consuming way that fills me with joy today to reflect on how far he has come. That first day it was nearly impossible to coax his 60-pound body into my car. It was apparent that he had rarely, if ever, been in a vehicle. Today, we can’t pass the car in the driveway without him stopping and pleading to go for a ride. In the first three days, he pooped and peed all over the house, including on the sofa and bed, but he hasn’t done it since. I have come to believe he was never allowed in a house before. He completely destroyed two wire crates in those first few months, further injuring himself, but we both have learned from our experiences and now he will willingly go into his higher security reinforced crate on cue. But his biggest success is in his socialization.

At our day training program, people drop their dogs off at our facility for basic obedience, socialization, and “fun time” such as agility, nose work, and canine cognitive games. I was initially hesitant to bring Mookie once his wounds had healed. He got along well with my female dogs but had a “jealousy”/guarding dynamic with my other male, and his past was a huge question mark, but I knew that day training was the key to his rehabilitation. On Mookie’s first day, I practically had to drag him into the facility, and introductions to other dogs went slowly and carefully. Throughout this time, I continued basic training at home and to expose him to as many positive experiences as possible. He was very quick to pick up new skills and took such joy in playing with the other dogs.

Mookie’s pivotal test came six months later. The center got a new client dog, Ralphie, who had been attacked by another dog, then was trained (briefly) using an e-collar by another trainer to address his reactivity. Ralphie barked and lunged at everything, but especially other dogs. Over several weeks, we introduced the boys outside at a distance for brief periods, BAT-style, then moved closer with more duration, and eventually, had them together off-leash indoors. Of course, they wound up being the best of friends, and I cherish a video I have of them looking calmly out the plate-glass window at a dog walking past, then Mookie turning away and Ralphie following him, to run off and play.

Since then Mookie has helped several dogs who have been attacked by other dogs and/or have reactivity issues, always going slowly and carefully with at least two professional trainers present. He recently received his AKC-CGC certification, and my future goal is to use him as a therapy dog, working with abused women and children. My career interests have sharpened to focus on abused, rescue, therapy, and service dogs. We will soon celebrate Mookie’s second “gotcha” anniversary and, truly, no one can say who rescued whom.

*This post is the Winner in our Phoenix 2020 Writers’ Competition. All winning, runner up and selected entries will be published here on the BARKS Blog and in upcoming issues of BARKS from the Guild. For a fully immersive educational experience in animal sheltering and rescue, join us at the Pet Professional Guild Annual Summit in Phoenix, Arizona on September 17-21, 2021.*

About the Author
Kim Geisert has been working with dogs for over 20 years, having started out by walking and sitting dogs part time. She started training professionally five years ago, working for two large corporate pet stores and currently runs Benevolent Sun Dog Training in South Florida, conducting private lessons, group classes, and day training sessions. She is an AKC-CGC certified evaluator, and prior to the COVID-19 outbreak, was scheduled to take her CPDT-KA exam.