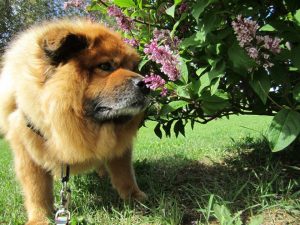 Even as a child, I always noticed dogs outdoors… especially during our long, dark Alaskan winters. Dogs living in yards, chained to an old car, trying to stay warm by burrowing under the deck. I was familiar with the buzz of a sled dog yard, maybe a hundred dogs bouncing and barking, but these dogs outdoors alone stuck out to me as extra sad. One night, one of our neighbor’s dogs didn’t survive a cold night outdoors. I remember my grandmother marching over and taking their other dog off the chain and bringing him to her house. She then called up the neighbor and informed them that he was going to be living indoors and that they could visit him if they wanted to.

That experience in my formative years was the seedling for Straw For Dogs. In 2009, I had been volunteering for various shelters and rescues. I had started a dog walking business the year before and would notice certain dogs in yards when I was visiting clients. Some of these dogs were always outdoors, no matter the weather or time of day. The idea came to me to offer help for these dogs by way of a doghouse or straw for the shelter they had. With the help of my husband, Orion, we started picking up free doghouses on Craigslist, refurbishing them, and knocking on doors. People were receptive, and soon we were putting ads on Craigslist offering free doghouses for dogs in need. We learned that many dogs outdoors were also going hungry so we started offering free dog food, collecting donations from friends and family to distribute. Some of the dogs were unwanted, which led us to fostering and adopting them to new homes after being vetted and rehabilitated. Our little grassroots group grew quickly and by 2012, we applied and received 501 c3 non-profit status. At the time, owner support was a new concept for animal welfare and we were considered a bit crazy even by the shelter and rescue folks.

One of the first dogs I had noticed on my dog walking route was a fluffy orange chow mix. She would charge the fence and bark furiously when we walked by, so much so that I stopped taking my clients dog by her house. Just to see if she did live outdoors full time, I would drive by as I arrived and left. She was always out in the yard, lying in the snow or pacing the perimeter. There was a black wire crate with a tarp half thrown over it, a shelter of sorts, that looked unused. One day there was a woman in the yard and I pulled over to talk with her, offering a doghouse. She quickly accepted and took my phone number. I told her we would come by in the next couple days and she gave us permission to set up the doghouse in the yard. Later in the week we did so, stuffing a dry, wooden shelter with straw for extra insulation and tossing the chow dog a chew to work on. 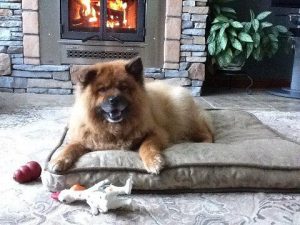 I was confused when the same woman called to ask when we were going to set up the doghouse. She had been walking by it for days by that time on her way to her own front door. She had been walking by the dog as well… I tried to hide my shock and asked her if I could walk the chow dog, since I was “already in the neighborhood walking dogs 5 days a week.” I explained that I had an orange chow mix that I loved dearly, named Monkey, who had passed away at 14 years old that same year. I don’t know why I thought it would be a good idea, I certainly had never heard of anyone doing something like that. However, she agreed and so started two years of hard lessons in love, patience, and hope.

The first time I walked “Chewy” she dragged me down the street, so eager to explore outside of the fence. The next time I was better prepared with running shoes on! She was terribly overweight, so I wanted to gradually increase her exercise. But after being bored and yard bound, Chewy would bound, hop, and jog down the street and wooded park path, wading in the creek. She was kept in a front yard, so it was easy for me to open the gate and get her leashed up. I rarely saw the family, and when I did, it took months for them to talk to me. Chewy grew to expect me, wagging her huge fan of a tail, stomping her feet, and huffing with excitement. After our walks I would fill up her almost always dry bowl with water I brought. I would fluff up her straw and toss her a chew. I would try to keep it together until I got to my car, smiling back at her while she settled in with her bone. Then I would often sob, so sad to leave her out in the elements, alone and ignored. She never seemed to feel bad, even when her coat was crusted in ice or she was especially hungry or thirsty. She would greet me, dancing and prancing on her cute little paws, and say goodbye with the same gusto. 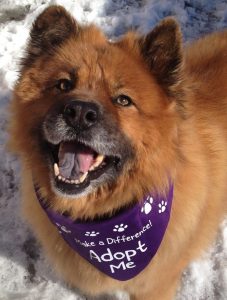 For two years I walked her with this arrangement. Chewy learned some leash manners and I loved spending time with her. I had carefully offered to find her a home, but the family was resistant to that and said she was their guard dog. Summer came, and then the leaves fell again. I brought her toys and chews to help with the boredom of waiting in a yard. Straw For Dogs was becoming a full-on non-profit organization. We started building our own doghouses to keep up with distribution. We had dogs in foster homes and had adopted out a few to indoor homes.

One day, near Christmas, the man of the house where Chewy lived called me. He had grunted suspiciously at me in passing, but never much more. To my surprise, he asked if I would take Chewy. He said she couldn’t live indoors because she had growled at the grandkids, went after a small dog in the home, and she was ruining the yard. As much as I wanted to, I knew I couldn’t keep her as I had my own houseful of dog reactive dogs. I had to be honest that we would find her a home but not with me. He didn’t like that and hung up the phone. I burst into tears, wondering if I’d missed my chance to rescue her from a life of neglect and isolation. When I went to see her the next time, I brought extra toys and treats in case they would decide that I couldn’t visit anymore.

A few weeks went by, and the grandfather called again. He told me that she was about 11 years old and he had tried to rehome her twice. He was a pilot and had given Chewy to a family in a rural Alaskan village, only to return the following year and find her chained with such a short tether that she could barely lie down. Disturbed by the conditions, he had the family relinquish her back to him. Then he had left her with his family in Fairbanks but found out she had been taken to the animal shelter. Once again, he went to rescue Chewy and had kept her since. He worried that she might suffer similar fates in our adoption program. I was honored to hear his story and assured him that we would make sure she had an amazing home. I asked if I could pick her up right then, afraid he might change his mind. He said the next morning would be better, and I had a long, sleepless night.

When we went to get her the next day, Chewy’s food and supplies we had brought were already on the porch. She did a jig, didn’t look back, and jumped in my car like she knew this was going to happen all along. This time, I cried with relief into her soft, fluffy coat.

Somehow, my dog-loving mom didn’t have a dog at the time, so Chewy went to my parents’ house to be fostered. We renamed her Cookie, as she really didn’t respond to Chewy anyway. She adapted easily to living indoors but also liked to patrol their five lakefront acres and sunbathe on the porch. With her age and dog reactivity, she was never formally adopted but she had a forever foster home with my parents. My dad, always the reluctant participant with our pets, fell especially hard for Cookie, marveling at her great house manners. He liked to say she was the best dog they ever had. She lived with them until she passed at 14 years old.

*This post is one of two Runners Up in our Phoenix 2020 Writers’ Competition. All winning, runner up and selected entries will be published here on the BARKS Blog and in upcoming issues of BARKS from the Guild. For a fully immersive educational experience in animal sheltering and rescue, join us at the Pet Professional Guild Annual Summit in Phoenix, Arizona on September 17-21, 2021.*

About the Author
Metis Riley is a certified professional dog trainer (CPDT-KA) and animal advocate based in Fritz Creek, Alaska. In 2008, she started her dog walking business, Downtown Dogwalker, in Anchorage, Alaska. She has mentored under numerous trainers and taught a variety of group dog training classes as well as provided private instruction. She has also fostered and volunteered with numerous shelters and rescues since 2007, and in 2010, she co-founded a non-profit that helps pets outdoors, Straw For Dogs. Currently, she offers in person sessions and group classes in Homer, Alaska as well as online learning.