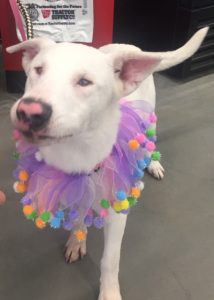 Hope comes in many ways, shapes and forms. We are encouraged in life to never give up Hope.

It was a rainy stormy day. A medium sized, white dog was spotted wandering the school yard going from door to door. Every once in while she could be seen sitting by a certain door. She did not appear frightened or scared and most folks thought she had just wandered from her home and was looking for a child in her family.

After several hours passed, a kind woman went towards the dog and called to her. The dog did not respond. She sat by the door of the school unresponsive, yet attentive to the smells on the other side of the door.

The woman took mercy on the dog, fearing she would be hit by a vehicle as they came and went during a busy school day, and finally decided to put her in her car. The dog went willingly and in a friendly manner with no resistance. She seemed relieved to be out of the rain and in a place with a human.

As a last resort, after a day of searching, the woman took the dog to the county shelter. The shelter was full, however. The animal control officer called a local veterinarian’s office to see if they could help. One kind veterinarian agreed to let the woman bring the dog to the office on a temporary hold until the shelter had an opening. The woman that found her was greatly relieved; as a busy mom with a household full of children and animals, she could not take on any more in her life. She took the dog to the veterinary office and shared her story as to how the dog was found.

The next day the veterinarian had a few moments to give the dog a wellness check, look for a microchip and treat her for any needs she might have. She determined the dog to be about seven months, not spayed, healthy and heartworm negative. She also found the dog to be both blind and deaf. It was a miracle that she had even survived being on the streets without being hit by a vehicle.

The veterinarian immediately called me as she knew of my background and experience with shelter dogs and working with dogs in general. She asked me if I had ever worked with a blind and deaf dog. It was her medical background that caused her to consider whether the dog should be humanely euthanized as it did not look as though a blind and deaf dog would readily be adopted not to mention that she would need a very special home that could keep her safe and manage her accordingly. Nevertheless, I encouraged the veterinarian not to take any action until the dog could be evaluated. 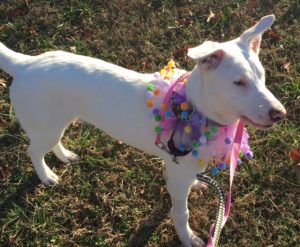 Hope is “absolutely perfect in every way” © Heddie Leger

I immediately went to conduct the evaluation and determine if we could work with her as I did happen to have experience working with blind or deaf dogs – but not those that were both blind and deaf. They had not yet named the pup at the clinic. Meanwhile, I did a thorough evaluation, as I would with any shelter dog. I found her to be very balanced, very friendly and very trainable. In fact, she was one of the loveliest dogs I had ever seen or laid hands on in my life. She yielded and looked for direction in every aspect. She showed no reservation in greeting or bonding with either humans, dogs, any age of person and was even horse and cat friendly. It was a mystery as to how she had become homeless.

I recommended the veterinarian not euthanize her and promised to work with her. I saw great potential in this little dog and wanted to give her an opportunity for a wonderful life. The veterinarian reluctantly agreed. The staff was fully behind me and we put together a plan for the pup.

To start with, the dog was experiencing some stress from being kept in a small veterinary kennel all day long, so I suggested some scent relief for her, DAP, calming music (even if she could not hear the music, she would be able to feel the vibrations of sound and so it could be beneficial), and for the staff to put a towel or shirt with their scents on them in the dryer and then in the kennel with the dog. Gradually, her stress began to diminish as she became more comfortable with the scents and the routine of the office. This strategy worked. It did not take long for the staff to get really attached to this lovely dog and they decided to name her Hope. She now had a name and an identity. She was taken off the euthanasia list.

Since I had promised to work with Hope, I took her out on a regular basis to experience the world. I found her absolutely perfect in every way. I felt as though God had given me a formless lump of clay to mold into a beautiful life, the name they had given her was perfect. With each interaction, she gave me Hope. Not knowing her background, it was challenging to know how she would adapt. We went to stores, gas stations, the park, long rides, and visited with groups of children which she loved. She walked nicely with me, was friendly, and adapted nicely to each and every situation. 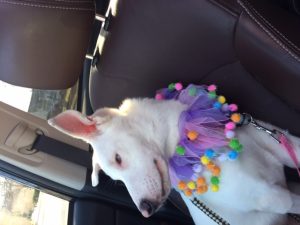 After seeing how well she did, we decided we would work with her to be a program dog. The veterinarian had become convinced she would be a good addition to the team, so she was spayed. The name Hope is very fitting for this dog. She has now become a member of the veterinary clinic to help with socializing other dogs and keeping nervous dogs calm. She also calms the staff and makes them laugh during stressful times with her funny little quirky personality. She is doing well with her obedience skills which she is learning via force-free methods.

Recently, everyone panicked as they could not find Hope! They called for her and then, of course, realized she could not hear them, so they searched everywhere and were afraid she had slipped out the door. They then thought to look at the clinic cameras and saw the video of her walking from door to door, quietly sitting by the back door waiting for someone to let her out to go to the potty. She had learned her way around and was able to navigate the entire clinic and find the exact door they use to let the dogs out to relieve themselves. Once again, the staff had a good chuckle at Hope’s intelligence and ability to learn and reason. She looked up at them with that quirky little tip of her head, like she was saying, “Can I go out now? I’ve been waiting for you.” She gave them all a good laugh, which is often needed in veterinary clinics.

We can now say that Hope lives in the hearts of all that saved her and interact with her on a daily basis. Her new role will be as an educational program dog, working with me and the staff to bring responsible ownership information to schools and the community at large. She will also be a spokesdog for shock-free and force-free training. She is well on her way to a wonderful life inspiring other dogs that live with disabilities (as well as their guardians) and teaching people they too can learn new things and live amazing, productive lives.

The moral of this story is Never Give Up Hope.

*This post is one of two Runners Up in our Phoenix 2020 Writers’ Competition. All winning, runner up and selected entries will be published here on the BARKS Blog and in upcoming issues of BARKS from the Guild. For a fully immersive educational experience in animal sheltering and rescue, join us at the Pet Professional Guild Annual Summit in Phoenix, Arizona on September 17-21, 2021.*

About the Author
Heddie Leger of Hero to the Rescue started out by providing pet sitting and shelter dog services, which led her to her gaining her education to become a professional trainer. She has attained her CCPDT , CDBC and CCFT, is a Be A Tree Presenter, Bite Prevention Educator, Certified Humane Educator, and Trust Centered Trainer. From private to group classes, 4H, HAI, AAI, SAR, prison dog programs and behavior rehabilitation services, her journey has taken many twists and turns. Her therapy dog, Hero, became the first demo dog in prison dog programs in Missouri. In addition, the statewide corrections Missouri Puppies for Parole program asked her to be the lead trainer and consultant for the state and she traveled across the state with Hero to teach staff and offenders on the benefits of positive force free non-punitive methods of training and rehabilitating dogs. To date, the program has saved and placed over 6,000 dogs. She also designed a stringent apprenticeship program for the state regarding animal handling so that, on release, people rejoining society would have a useful viable skill with which to attain a job. Her love and specialty is working with dogs with disabilities.