Many people are astounded at the intelligence of pigs. Of all the animals that I train, one of my attractions to pigs is how quickly they learn. I had wanted to train pigs for quite a while, having been aware of their intellectual ability. I now have several who are regular clients and am contacted quite a bit for porcine behavior issues.

With the latest craze for the ‘Teacup Pig’ or ‘Micro-Mini Pig’, this does raise concern. A Teacup Pig is only a Teacup when he is first born and can fit into a teacup. That Teacup Pig grows up to be a Micro-Mini or a Pot-Bellied who can easily exceed 150 lbs. Besides size, a pig’s level of intelligence is a real concern. With manipulation being a sign of intelligence and the opportunity for an animal to change the consequence of a situation with each time they are successful… well, this describes the pig to a T.

I train many pigs here at my training -center and still more in people’s homes. One of the most common behavior issues I hear about is aggression. Pigs are… pigs. They will do anything for food, which is one reason they are so fun for me to train. Food makes it easier to modify their behavior. On the flipside, I see pigs charge other pigs for the opportunity to eat. I see them charge their owners or caretakers to get them to toss food. This seems to be pretty common and I see owners tossing food to put distance between them and a pig who is about to bite or charge. Other common issues I see are with potty training, problems with other animals and the lack of appropriate enrichment for an animal this smart. 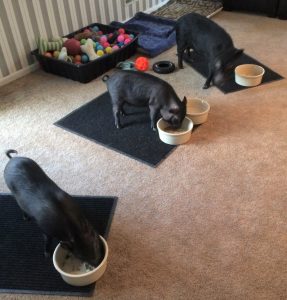 Pigs are prey animals and I have observed instances where the body language clearly shows that the pig is not comfortable with a situation so many times. I watch for hair rising on the back of the neck. Or, the tail stops wagging, the pig stands still and observes his surroundings from the side. These are all clear antecedents to aggressive behaviors such as charging, swinging the head to the side to hit or bite, or biting from the front. Often, if I see a pig not comfortable with a situation, he quickly puts distance between himself and the subject causing the concern.

I am kept on my toes quite a bit with a Micro-Mini who comes to my training center for training on a regular basis. I have observed his body language. The sound of food dropping on the floor quickly becomes a conditioned stimulus. If a dog leans down to grab the food it can quickly make the pig run faster to get the food. If this happens, I now have a pig running toward a dog. If the pig does not get to the food first, I have noticed his frustration levels rising, from the difference in his snorts to charging faster for the food and quick head swings to get the food. It is for this reason I teach most animals to station to a carpet square and provide high rates of reinforcement for them staying there when they hear the sound of food hitting the floor. I make sure the behavior of stationing brings a higher reinforcer than running to the food that has hit the floor.

In a center with numerous animals there is plenty of opportunity for a lot of different things to be reinforcers for a pig. This is why we provide many opportunities for animals to target. Each time a bird cage door is opened, we train the pig to “touch your target”. We train this cue so the pig places his head to hover around the center of the X’s we have taped on the floor next to each bird cage. These areas are high traffic areas and running to grab a carpet square would not be easy, nor would it likely stay in one spot with the people, dogs and other animals walking around these areas. 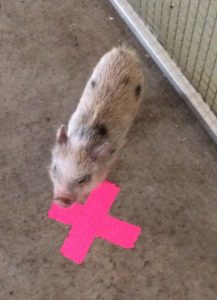 X marks the spot: A Micro-Mini targets to his marker © Lara Joseph

Teaching numerous pigs to station to individual carpet squares creates control in a potentially chaotic situation. When I was first contacted about training pigs, I had to deal with them jumping on people and nipping at fingers and toes in anticipation of feeding. So I trained each pig individually to station to a carpet square then added a ceramic bowl and created the conditioned stimulus of a Cheerio hitting the bottom of the dish. Eventually I added another pig and reinforced both pigs for having four hooves on the squares. Then I added a third pig. I began adding small portions of their meals, gradually training them for all of their meals.

So much of what I do is target training. One of the pigs I train was getting sick on a regular basis. One of the first signs of sickness is a high temperature and it is for that reason that I began training each pig to allow me to perform voluntary rectal temperature readings. I began by having them target their backsides to my hand. I would reinforce them with Cheerios using the Treat & Train technique designed by the late Dr. Sophia Yin. Once they began targeting, I began reinforcing longer periods of targeting. I began the lifting of the tail, the application of the thermometer, and then waiting the period of time required to accurately take a temperature. The pig who had been getting sick weighed in at 85 lbs and had been showing signs of aggression. For obvious reasons, I did not want my face anywhere near her eye level without protection. Now we have trained her to do all of the above behaviors from inside of the crate. No need for force, no need for coercion and no need for punishers to control behavior. You can see the video of one of the pigs voluntarily training to have her temperature taken here. Happy Training!

About the Author
Lara Joseph is the owner of The Animal Behavior Center, an international, educational center in Sylvania, Ohio focusing on teaching people how to live, love, and work with animals using positive reinforcement and approaches in Applied Behavior Analysis. She is a professional animal behavior consultant and trainer with a focus on exotics and travels internationally giving workshops, lectures, and provides online, live-streaming learning programs on behavior, training, and enrichment. Her focus is on behavior and training with all species of animals whether in the home, shelter, zoo, or educational ambassador. She sits on the advisory board for All Species Consulting, The Indonesian Parrot Project, Collaboration for Avian Welfare, and is the director of animal training for Nature’s Nursery, a wildlife rehabilitation center in Whitehouse, Ohio. She is also the founder of several animal organizations for animal welfare and has much experience working with special needs animals. She is a published author and writes regularly for several periodicals and also blogs for Deaf Dogs Rock. She has also been asked to co-author and is currently working on an international manual of animal behavior and training. She is a guest lecturer in Zoo Biology; Animal Nutrition, Behavior and Diagnostics taught by Dr. Jason Crean at St. Xavier University in Chicago, Illinois.