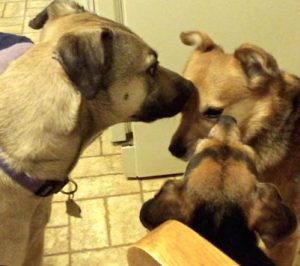 They really do get along! Honest!

One of the things I am very grateful for in my life with dogs is that my current three get along. They don’t adore each other, but two of them, Clara and Zani, actually play together and are comfortable in each other’s space bubbles. Zani helped “bring up” Clara, even though Clara got pretty obnoxious pretty fast as a pup. And both of them manage to get along with Summer, who would really prefer to be the only dog in the world. Or at least the only female. But thank goodness they don’t hate each other.

I’ve written before that Summer is bothered by rowdy play and used to go on the attack when she thought Zani and Clara were being a bit too chaotic. I taught Summer something else to do rather than charge in snarling and snapping. I’ve shown some other clips and stills of Summer and Clara in particular vying over resources, but doing it without physical contact or a fight.

But before I ever had Clara, during Zani’s first several months in the household, Summer and Zani played almost constantly. So Summer does know how to play. I’ve always kept a close eye when she did, since her play often has a little edge to it.

Nowadays, every once in a while Summer seems to invite the others to play, or something. Usually she play-bows to Zani, then follows it up very quickly with an attempt to hump her. Often Zani will come leap in my lap when Summer tries that. Sometimes Clara gets between Summer and Zani. Typically, Clara and Zani both get visibly anxious when Summer initiates…whatever it is she initiates.

In today’s movie, it didn’t play out quite like that, but I think it’s very interesting. Summer appeared to invite the others to play, and they weren’t having any of it. Zani wasn’t nervous enough to flee, and instead was quite assertive. Clara was her usual blunt self. But even though the other two ganged up on her, Summer remained remarkably calm and unbothered.

The most interesting thing to me was Zani’s extensive nosing of Summer’s ear and mouth, followed by Clara doing something similar. Some people who have seen the movie have speculated that Summer might have something medically wrong that the others were picking up on. But I can say with near certainty that the nosing was not curiosity of any sort (and that there’s nothing wrong with Summer’s mouth or ears). Zani’s automatic, normal response to either of the other dogs coming to get attention from me is to stick her nose persistently into private places–butts, ears, or mouths usually. She can almost always get Summer to move away by doing that. And if you look at Clara’s behavior carefully, she is doing a whole lot more poking with her nose than sniffing.

It’s easy to feel bad for Summer watching this. The other two are so obviously telling her to get lost. But my read on it was that Summer was relaxed about the whole thing. Her initial invitations were, for her, loose and friendly looking. During the whole of the intrusive nosing, she stood there wagging her tail (a nice wag–slow and wide, at three quarters-mast). She had fleeting looks of concern, but mostly her mouth was loose and to me she looked quite pleased with herself. Also–Clara left the scene first. (Clara and Summer headed for two different water bowls for a drink at the end.) I score it Summer: 1; Clara and Zani: 0. Nice try, girls!

Link to the video for email subscribers.

A Note on Behavioral Function

Performing behavior analysis in situations other than training helps me understand things better. Perhaps it does for some of you, too. So I’ll bolster my hypothesis with a tiny bit of it.

The reason I think that Zani’s sniffing/nosing behavior was saying, “Go away” to Summer, is that I have seen it perform that function dozens of times. The usual behavior analysis goes like this:

This is a negative reinforcement scenario. My dogs are all experts on using pressure on each other (and on me). But the interesting thing is that the prediction didn’t come true.

This time, Summer didn’t move away, even when Clara joined in with the pressure as well. So I’ll have to keep an eye on the behavior patterns in the future. Was this a rare aberration for Summer? Or is she getting desensitized to Zani’s nosiness? And if so, will Zani develop a new tactic? Zani is an expert communicator, and as the smallest dog in the household develops some interesting ways to get what she wants. I’ll report back if something interesting comes of this.

Do you have a dog who does something non-violent (but obnoxious) to get another dog to move away?