Portland Blog Competition: The Journey of a Crossover Trainer 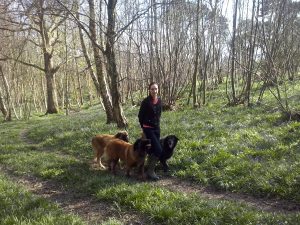 Feeding for desirable behaviors, no matter how small or inadvertent, with a cue word attached resulted in an exponential explosion in desired behaviors, better recalls, and beautiful leash walking – all in a matter of weeks. © Nichola Marshall

This is going to sound like an Oscar acceptance speech and it kind of is because I feel like I have won something very special – a change of perspective. So before I start crying I want to say, “thank you” to all of you for sharing your experiences and being supportive, thank you for being tolerant of my “noobie” questions and comments, thank you to the late PPG steering committee member Anne Springer and, most of all, thank you to whoever it was who said, “Don’t be stingy with your treats.”

What I am going to say is going to sound obvious to anyone who already understands positive reinforcement (+R), but please remember this next time you meet or read a post from someone who says +R only won’t work. As someone who has been brought up on old school “yank and crank” methods, being told +R only can work is rather like seeing a picture of an old woman and being told that it is a picture of a young lady. Once you have one perspective, it is really hard to see the other.

My dogs are livestock guardian dogs and some people will tell you that they cannot be trained to be “obedient.” My old girl was trained “old school.” She is a very good girl and now I understand why – she has been conditioned to avoid an aversive (leash check) by responding to a verbal cue. Of course, she was encouraged with rewards of games, praise, or treats, but I didn’t see how you could remove the aversive and still get obedience as this type of training is prone to extinction anyway, as soon as you reduce the aversive even. You have to recondition periodically. If you just use rewards, then the dog is simply choosing whether she wants the reward you are offering or the reward she has found for herself. This is why old school trainers say (what they perceive to be) “bribery” alone cannot work. 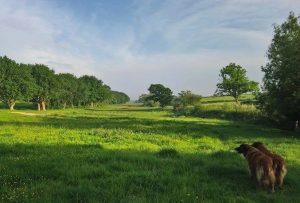 After counterconditioning, a previous trigger now acted as a cue to recall for these livestock guardian dogs © Nichola Marshall

I decided to give +R a try anyway. I never liked the puzzled, upset look I got from my dog when she got it “wrong,” even though I tried to make up for it with games and praise and treats. I also suspect the unnatural, sudden turns may have attributed to the wear and tear on her cruciate ligaments. So I decided that my next dog was going to be an experiment in +R only and, to be perfectly honest, it was slow going. I thought this was mainly because I’m human and didn’t train often enough because I was tired from work or busy or whatever. There has been more than one occasion when I have thought, “I can see why people stick to old school methods – it’s much quicker/more effective.” I now realize this was because I was being stingy with my treats! I was doing +R only, but I still had an old school mentality towards treats: that they were there for shaping, luring, and rewarding for obedience.

Luckily, I saw the “Don’t be stingy with your treats” comment in a Facebook group, and along with the other comments I had read about “look at me” and clicker training, and also picking up on when others would treat their dogs, I decided to change tack and feed for everything good, no matter how small or inadvertent, with a cue word attached. It seems so obvious now, but mentally it was a total paradigm shift for me to reward behavior rather than obedience. Feed my dog just to make her happy? Yes. Without her having actually “obeyed” anything necessarily? Yes. Result? Exponential explosion in desired behaviors, better recalls than I ever had from “yank and crank” training methods, and beautiful leash walking – all in a matter of weeks.

At the time of writing, the following, however, are my “jackpot” instances so far. These are what made me really want to say “thank you” to everyone who has helped me to understand how to train my dog and to see the young lady instead of the old woman.

The first instance was when my pup spotted a horse in the next field when we were out on a trail. Previously, this would have sent her into a frenzy. Instead, she stood calmly looking at the horse, looked at me, looked back at the horse, and before I could open my mouth, she turned around and started trotting back to me to collect her “prize” for seeing a “big four legs.” A previous trigger is now acting as a cue to recall.

The second instance, she was off leash and I was just thinking she was getting a bit “wired” and that it was time to put her back on the leash when she stopped dead facing into the field. I came over the rise to see there was an unexpected herd of cows in the field and my dog was twice as close to them than she was to me. Anyone with a reactive dog will know this is nightmare scenario #1. She was tense and so was I. My first attempt to call her came out as a strangled squeak and was probably blown away by the wind in any case. My pup started to walk and stalk her way towards the cows. I was having visions of stampedes, broken legs and a shot dog. I called “wait” and she stopped, still staring at the cows. I called her to me, and was, admittedly, astonished when she instantly turned her back on the cows and come galloping back to me. I fed her many, many treats. My hands were shaking so much I could hardly get her leash back on. I then just sat in the wet grass and gave her a chest rub and more treats. Before then, I don’t think I believed, in my heart of hearts, that I could actually, genuinely, really, truly, countercondition a response without aversive measures. In that awful, heart stopping moment, my spoiled little +R only pup proved to me that I absolutely can. 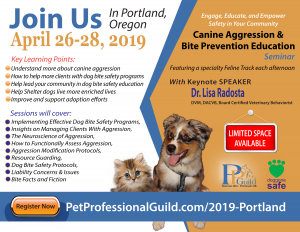