Dogs and humans have a long history of living and working together, unique among species on this planet. In the modern age dogs wear many hats…companions, herders, protectors, search and rescue, guides for the blind, bomb and drug sniffers…just to name a few. 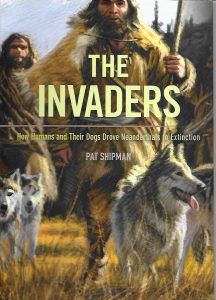 During prehistoric times dogs served our ancestors as well.

In “The Invaders: How Humans and Their Dogs Drove Neanderthals to Extinction” Pat Shipman, a retired Adjunct Professor of Anthropology at Pennsylvania State University, chronicled in exquisite scientific detail the alliance between the two predator species.

That alliance conveyed mutual survival advantages at a time when dangerous mega-fauna roamed the landscape. Dire wolves and cave lions were among the many predators they had to contend with.

In December of 1994 a team of scientists explored a cave in the Ardeche region of France, the main entrance to which was buried by a rock slide some 20,000 years ago. With the entrance sealed, the cave interior was preserved. Advanced carbon dating placed human activity in the cave 32,000 – 36,000 years ago.

It was named Chauvet Cave after the caver who accidentally discovered a tiny entrance.  In his documentary film, Werner Herzog called it “Cave of Forgotten Dreams: Humanity’s Lost Masterpiece”.

I consider the relationship between dogs and humans one of nature’s masterpieces. 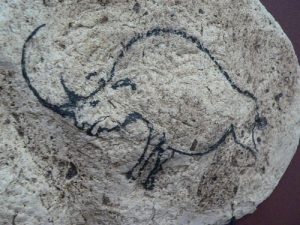 “Reproduction of Cave painting 3” by mharrsch is licensed under CC BY-NC-SA 2.0

The first anatomically modern humans in Europe lived during this time and are called Aurignacians. On May 17, 2019 Kat Long posted an article (MentalFloss.com) listing 13 facts about the Chauvet Cave paintings which these ancient people created.

Fact number 7 on the list declares “A Prehistoric Child’s Footprints Were Discovered in Chauvet Cave”. That may not sound terribly remarkable, but number 8 added “The Child Might Have Had a Pet Dog.”

The child’s footprints were near those of a canid, whose print was more typical of a domesticated dog than a wolf. Long wrote that a 2017 study concluded “dogs and wolves split genetically sometime between 41,500 and 36,900 years ago.” (That study was not cited for reference in Long’s article)

Shipman refers to mtDNA data concluding “modern dogs originated in Europe…sometime between 32,100 and 18,000 years ago” (Page 179) and coincides with the presence of Belgian canids. 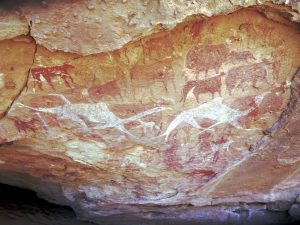 “Paintings in Bichagara Cave” by D-Stanley is licensed under CC BY 2.0

Further, Shipman argues the alliance between modern humans and dogs competed with Neanderthals for big game, “a distinct and ultimately decisive advantage for humans…at a time when climate change made both groups vulnerable.” Our closest Hominid cousins went into extinction after 200,000 years of success.

Yes, in addition to the sudden presence of noxious methane in the living room, we have yet another thing to blame on the dog.

But there is more…After four months of painstaking research, scientists concluded that early humans also used dogs to predict the weather.

They determined that cavemen led a dog outside and tied it to a tree, and then made careful observations. When they returned to their cave they depicted their observations and weather interpretations in primitive, yet beautiful wall paintings.

This is what the paintings depicted.

Linguistics experts agree that human language first developed due to our unique relationship with dogs. And thus “Bad dog!” were the first words ever spoken by prehistoric man and have remained in constant use ever since.

In addition to “Bad dog!” other words soon entered the lexicon, such as “Get off me!”, “No!” and “Bring back slippers!”.

As a result of the foundation laid by cavemen, modern highly intelligent human dog owners are able to recite in a single breath, and without any effort or thought, extremely complex communication to their pets: “No! Get off me! No! Get down! No! Stop that! No! Come back here with my slippers you bad dog!”

Shortly after language development came the invention of fire, the wheel and electronic gaming devices. The world has never been the same since.

Disclaimer: OK, you caught me. I just made up the stuff about weather forecasting and the development of human language. Bad human!

Back to the facts.

The prehistoric art in Chauvet Cave and many other ancient caves show us the world as it was when dogs first joined us.

As reported on November 20, 2017 by Ryan F. Mandelbaum in Gizmodo.com (“Ancient Cave Art Depicts Oldest Evidence of Dogs Wearing Leashes”) humans on the Arabian Peninsula were hunting alongside dogs 8,000 years ago.

I suspect that the arc of Hominid development would have evolved quite differently, had it not been for the help of dogs. The least we can do is show appreciation and treat them with the respect and kindness they deserve.