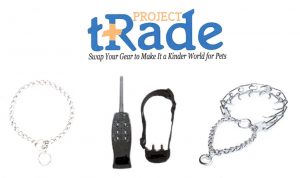 In March of 2016, the Pet Professional Guild rolled out Project Trade, an international advocacy program promoting the use of force-free pet equipment by asking pet guardians to swap aversive gear for a discount on services.  The aversive gear was identified as shock, prong, and choke collars.

I was one of the initial members of Project Trade, who now number about 56 pet professionals in several nations.  Together we have collected many aversive collars and freed pet dogs from the fear, pain, and intimidation that equipment once inflicted.  Just as importantly, we educated pet guardians and taught them force-free ways of working with their pets.

Compassion is the core of Project Trade, and I often reflect on how my humble contribution has helped the 40 individual dogs I had the honor of working with, and how relieved their families were to learn kinder and gentler ways.  Many of the families include young children, who are now seeing how to treat pets humanely, rather than thinking it is acceptable to inflict pain to inhibit or compel behavior.

In Project Trade, everyone wins.

Each dog has a story to tell and I tend to fall in love with every dog I work with.  As I revisit Project Trade to reflect on my journey, I am happy to share a few of their successes. 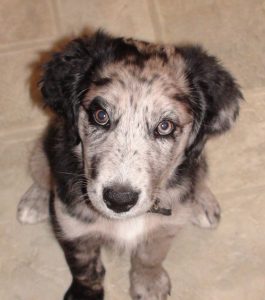 Grayson, an adorable Australian Shepherd/Poodle, was one of my first Project Trade clients.  I met him on August 3rd (2016) and he exhibited all of the behaviors typical of a puppy in need of basic training.  The family previously installed an electronic containment system (ECS) in their yard for their older, fearful dog.  They put an ECS shock collar on Grayson too, when he joined their family.

I persuaded them to trade both shock collars with me.  Grayson and his canine housemate were freed from electric shock and could enjoy their yard without worry.

Upon returning home after the training session I performed a ritual which became a tradition that I call “Defanging the Beast.”  I used a small screwdriver and a needle nose pliers to open each device and dissect the wiring, electronic components, and battery.  Sometimes my Labradors, Buddha, and Gandhi, help me.  Once done, I placed the collars in a box. 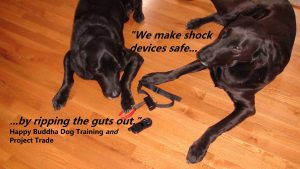 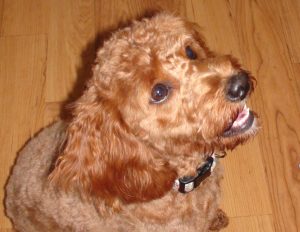 Maple, a beautiful brown Cockapoo, had not been taught how to walk nicely on leash, and so she pulled.  The guardians put a choke collar on Maple during their walks, as I once did with my black Labrador, Jake.  Like Maple’s family, I thought in terms of “controlling” my dog and followed the advice of someone who seemed to be an authority on dog training.

In my case, I paid a franchise dog trainer $600 to teach me how to yank on poor Jake’s neck when he made the leash tight, shouting at him for good measure.  I did not like it, Jake did not like it, and I feared that he was learning not to like me.

The choke collar quickly became a piece of junk, collecting dust in the basement.  But hiring the forceful trainer was not a total loss, for it gave me insight into aversive training methods, and my experience with Jake gave me the ability to discuss Project Trade with clients, coming from a place of empathy and compassion.

Who am I to judge others for doing what I did, in my ignorance?  It is far better to teach with compassion and celebrate their progress.  Life is a journey, and we learn with every step.

Maple quickly learned how to walk beside her handler without pulling on the leash, and her guardians were proud of how smart their dog was and felt better for using humane methods with the pet they so dearly loved.  They were as happy to rid themselves of the choke collar as I was, with Jake. 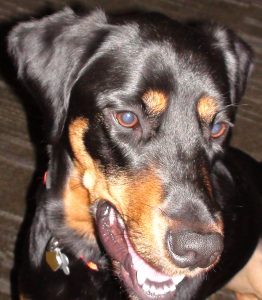 Arya, a mixed breed dog, also pulled hard during leash walks, but for a different reason.  She was leash-reactive upon seeing another dog and went into a pattern of behavior including barking and lunging.  Her guardians used a prong collar to inhibit the behavior, but still, every walk was a struggle.  Arya continued to be over-reactive during walks, and her behavior was growing worse.

In my first session with Arya I taught basic behaviors which I employ during walks: Look, Touch, Engage-Disengage and Loose-Leash Walking.  We practiced inside the home and in the back yard.

For the next session, we took a walk through the neighborhood.  The owners were visibly nervous and predicted that Arya would tip out of control upon the first dog encounter.  They knew where the neighborhood dogs lived, and I saw them grow ever more tense as we approached those homes.

But I had no history with Arya and was not emotionally conditioned toward anxiety, so I remained calm and helped Arya do the same.  I worked with her during our 60-minute walk, applying classical conditioning to change the way she felt about other dogs, and using operant conditioning to reinforce alternative behavior choices which contradicted unwanted behaviors.

The guardians repeatedly expressed their surprise at how quickly Arya responded, and the lady nearly came to tears.  They had never been able to walk in their own neighborhood without embarrassment and drama and saw that Arya did not need to wear the prong collar after all.

As we returned to their home a dog across the street and behind a fence, went into a reactive state.  It barked furiously at Arya and ran back and forth along the fence line.  Arya quickly responded to the other dog’s behavior, and she did so without barking or lunging.  She looked at the dog when it barked at her, and then looked at me.  Arya was exposed to the same environmental trigger as on previous walks, but expressed a different emotional response and behavior.

The power of Project Trade is that it can change the lives of dogs, and their guardians.

It seems to me that when people turn to aversive equipment in their belief that they need it to exert control; it becomes like an addition.  They feel quite vulnerable without the device, which then leads to continued use of it, and precludes the humans and dog from learning.

How do we persuade pet guardians to give up aversive devices?

It helps to know why pet guardians use aversive equipment.  Based on my own clients, the vast majority used shock or prong collars during walks.  Their dog either pulled hard on the leash or was (emotionally) leash reactive.  They thought the device would control their dog, rather than imagining how their dog might learn to control himself.

I do not pretend to have all the answers, and this is how I found success in Project Trade.

First, the application form I use with new clients specifically asks about prior training equipment and methods.  That gives me a heads up prior to our initial meeting, so I can prepare.  If I know that a family is using a shock device, for instance, I can review research data on that equipment, and present the pet guardians with success stories from my own clients.

Second, I understand that pet guardians do not wish to harm their pets, but they often do not know that aversive equipment causes harm.  They may turn to such equipment out of desperation, as I did with Jake, and if they see that the equipment inhibits unwanted behavior, even in the short term, they may interpret that as success.

I gently explain what aversive equipment does, and what that in turn does to pets, based on scientific data.  As I work with a client, I shape our conversation in terms of the perspective and welfare of their pet.  I begin helping them see things from their dog’s perspective, rather than a human perspective.

Some of my clients chose me precisely because I promote Project Trade on my web site.  They were looking for alternatives and were happy to find one, with a discount on service fees as a bonus.  After my sorry experience with Jake, I was delighted to find a force-free trainer when I adopted Buddha and was happy to pay for my education.

Surprisingly, many of my training clients had never used aversive equipment and so they had nothing to trade with me, but my Project Trade marketing helped them find the sort of trainer they desired.  Someone with professional credentials who expressed empathy and compassion.  Project Trade set me apart from the trainers they wanted to avoid.

Third, sometimes a client needs to see some initial success without using the aversive equipment, and then they are persuaded.  I begin by teaching extremely easy tasks which I know the pet will learn quickly, and that the pet guardians can replicate with a little coaching.  I cannot count the number of times I heard pet guardians joyfully exclaiming “I never thought my dog could do that!”  They gladly swapped their gear and were eager to learn new ways.

The years passed and I had to get a third box to hold my growing collection.  Even during the Covid-19 pandemic I was able to collect more shock collars.  My journey with Project Trade has been personally rewarding, and a marketing strong point.  And if ever I feel that I am not helping enough dogs, I need only go to my basement and open the collection boxes.  I can see the dog hairs that still cling to those offensive collars and smile, knowing that each dog’s welfare has improved.

We all advocate for the best welfare of pets, and I proudly wave the Project Trade banner.  You are welcome to join us!