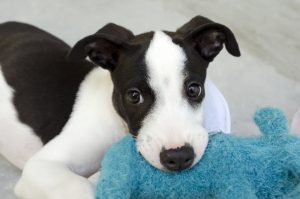 Preventing food guarding at mealtimes is usually pretty straightforward: simply allow puppy to eat in peace. If you have more than one dog, feed them separately and teach them that the presence of a human near their food bowl always means they are there for the sole purpose of adding a tasty treat to the bowl.

Don’t be persuaded that you need to take your dog’s food away or put your hand in the bowl while he eats to make him tolerate or accept you being nearby – because you risk doing exactly the opposite and triggering resource guarding.

What can be slightly more difficult when you have a puppy is preventing guarding of found or “stolen” items. Puppies tend to investigate everything they find by picking it up in their mouths, whether that be stones from the garden, the children’s toys, or anything that you happen to have left within reach. This can be particularly relevant to gundog breeds because they are hardwired to pick up and carry and like to have something in their mouths.

By forcibly taking an item from your pup’s mouth – especially if accompanied by getting a little cross with him for picking it up – you run the risk of teaching him to avoid you, and when caught, to guard the possession that is now his and you are trying to “steal.” 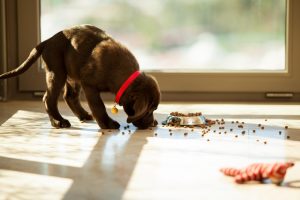 Allowing a puppy to eat in peace and feeding dogs separately if there are more than one in the home, can help reduce instances of resource guarding © Can Stock Photo/Antonio_Diaz

The solution here is to teach your puppy to “give” so that you never have to “take.” To do this, sit on the floor with a pile of toys and encourage your pup to bring them back after you have rolled them away. By sitting on the floor, you will not be tempted to move towards him.

When he comes close while he is holding something, tell him what a good boy he is while giving him rump or shoulder scratches. Do not put your hand near his mouth. Do not want what he has in his mouth.

At some point, he will probably drop the toy and then you can throw it again. If he’s a foodie, then a food reward for dropping is a good plan. Don’t use food as a bribe though; only fetch it from your pocket after he drops the toy.

Once your pup is happily bringing toys and dropping them in your lap or your hand, add in other items, coasters, tea towels…anything that he might like to “steal.” Then, start working with him to fetch stationary items as opposed to something you threw for him. Next, generalize this to anywhere in the house. Leave things for him to pick up and deliver to you, so you can praise and reward him for doing so.

You should, if you approach this the right way, end up with a dog that will bring you anything he finds – regardless of whether he should have it or not – while satisfying his need to find, hold and carry. Some people may consider it a chore to have their dogs bringing things to them all the time, but it’s preferable (and safer) to “stealing” and guarding and it can be toned down later, if required, by only rewarding the behavior if you actually ask him to “fetch.”

If your puppy is already guarding “stolen” items, then it is even more important that you don’t leave anything dangerous or valuable within his reach while you work on the above.

If he does get hold of something, then either ignore it and let him have it if it’s safe. If it isn’t, create a diversion such as a knock on the door, scattering food on the floor, or getting his leash out for a walk. This will probably only work once or twice though, so keep it for an emergency.

If your puppy is already guarding food, resting places, toys or even you then please seek professional advice from a reputable force-free trainer or behavior consultant. 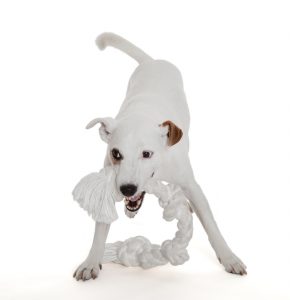 Ideally, a tug toy is long enough and soft enough for a puppy to happily bite and keep play low to the ground so the puppy does not feel the need to jump up © Can Stock Photo/Sehenswerk

Biting is a normal puppy behavior. Puppies investigate the world through their mouths and, if it is within reach, it will probably be picked up and chewed! If it is exciting and moves fast, it will definitely get bitten.

Dogs play by using their mouths because they don’t have hands. Puppies need to bite and they need to play. When a puppy mouths or bites, he is simply trying to elicit play.

Play is by far the best way to bond with your pup and is also a great way to reward him during training – so you don’t really want to tell your puppy you don’t want to play with him.

Don’t get cross, don’t make noises that may startle or excite him more, and don’t ignore him or use time outs as this is time wasted that could be taught teaching him how to play appropriately.

Don’t just give him a toy to play with. If he’s biting you, it’s because he wants to play with you and not with a toy on his own.

Use tug toys that he can bite. These can be old knotted towels or a favorite toy with string attached. Unwanted bathrobe cords are ideal. You need to encourage him to bite one end of the toy while you hold the other end. Then you can have a great game together without getting bitten.

Ensure your tug toys are long enough and soft enough for your puppy to happily bite. Your toy should touch the floor while you are holding the other end. This allows you to animate the toy and keep the game low to the ground and not encourage jumping up. It also puts distance between teeth and hands.

Interactive
Keep these interactive toys out of your pup’s reach while they are not being played with. It will keep them more novel, which means the pup is more likely to want to bite and play with them when given the opportunity. Plant toys around the house and garden (out of puppy’s reach) so you have them easily accessible and, as much as possible, take the game outside.

Rotate chew items that you leave on the floor to also keep them interesting. Do not play with your puppy unless you have a toy for him to grab. Don’t let anyone in the house roughhouse with him or roll about on the floor with him.

Meanwhile, invest in a puppy pen for young pups so they can be safely confined for short periods – especially if you have children. This also provides a barrier you can play through with a long tug toy before puppy has learned the concept of “bite toy, not body parts.”

Start by animating the toy on the floor and saying, “Get It!” every time your pup grabs the toy. You hold on to the toy and let him grab it and shake it. Let go of the toy sometimes so that puppy is encouraged to come back to you to get you to start the game again.

At some point, you can also teach a word for letting go. To do this, you simply stop the game by gently sliding a finger in the pup’s collar and releasing the pressure on the toy (while keeping hold if it) so it becomes boring. As soon as pup lets go, say “Thank you” and immediately invite him to grab it again with a “Get it.”

He will quickly learn to let go when you stop playing in order for the game to start again. Eventually, “Thank you” (or your word of choice) will become his cue to let go.

Once your pup is getting the idea of the game, then you can start to add in a “Sit” and an “Are you ready?” before the “Get it,” and before you know it you will have a dog sitting and waiting patiently for the game to start.

This article was first published in BARKS from the Guild, September 2020, pp.32-33. For more great content on all things animal behavior and training, you can sign up for a lifetime, free of charge, subscription to the digital edition of BARKS from the Guild. If you are already a subscriber, you can view the issue here.

About the Author
Sally Bradbury has worked with dogs all her adult life, from RSPCA kennel maid in her teens to founding and running her own very successful dog training business for 20 years. She was also a founding member of the APDT (United Kingdom). Her passion is helping and supporting new puppy owners raise their puppy to avoid the many pitfalls that results in so many youngsters being handed into rescues in their first year. She is now retired and living in Wales and has recently published children’s book, Jack and Billy: Puppy Tales, featuring two puppies who experience vastly different journeys in their new homes.