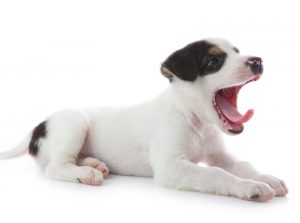 House training is all about creating good habits. Young pups have very small bladders and very little bladder control, so they need to be in the right place when nature calls. To house train successfully in as short a time as possible you must take your puppy outside as follows:

• When he wakes.
• After eating.
• After taking a drink.
• Before, during and after a period of activity.
• When you arrive home.
• Before you go out.
• Before bedtime.
• During breaks in TV shows.
• And every 20 to 30 minutes in between unless he is asleep. During periods of activity, change that to every 10 to 20 minutes.

Once you’re outside, stay there with your pup. Don’t nag or distract him. Just mooch about and he will do the same. Eventually he’ll eliminate. Quiet praise is sufficient.

Once pup has eliminated you can either stay out and play or go back indoors. If you stay outside for a game, then he will often need to go again before you go back inside, so stop the game and stay out for a while longer to give him the chance to go again.

If puppy doesn’t eliminate outside when you’ve been there for a few minutes, take him back in and sit him on your lap or tuck him under your arm (small breeds only) as you go about your chores, then try again in five minutes. It’s imperative that you do this, especially if you have started off with newspaper or puppy pads on the floor, because the puppy may prefer to urinate indoors and could simply be waiting to be taken back in.

Give the puppy zero opportunity to go wrong. If he eliminates in the house, it is because you haven’t house trained him yet and didn’t take him outside when he needed to go.

Common mistakes made during house training include:

• Using newspaper or puppy training pads. While these may aid the clearing up process, it can be very confusing for the pup who is taught or permitted to eliminate in the house to make the transition to going outside. This will often result in a pup that, when playing in the yard, will simply hold on until he is back indoors because that’s where the bathroom is.

• Leaving the door open. This does nothing to teach the pup to eliminate outside only.

• Reprimands for eliminating in the house risk the result of a dog who believes you disapprove of what he did, not **where ** he did it, and are damaging to your relationship with your pup.

• Giving treats for eliminating in the garden. Again, the dog is being rewarded for what he did, not where he did it. While this is not going to be as big a problem as any kind of reprimand, a smart dog may learn to do lots of little pees and never fully empty his bladder. The insecure dog, meanwhile, may urinate indoors to appease you if you get cross about something else, because he knows this is something he gets rewarded for. Note: Using both reprimands and rewards is very confusing for your pup.

• Expecting your pup to tell you when he needs to go out. Once a pup understands that outside is where the bathroom is, he may start to let you know he needs to go out. However, if you are not there to ask or you fail to notice him asking, then the house training will break down. It is far better to have a dog go outside to the bathroom on your schedule once he is house trained.

• Giving your pup an ensuite in his crate (if you use one). Do not encourage your pup to eliminate in his crate by putting in puppy pads. If you have to leave puppy for a while and he is likely to need to go to the bathroom, then, in my opinion, it’s best to have the crate inside a larger pen or blocked-off area and leave the crate door open, so he can get away from his bed to eliminate.

General Note: Areas indoors where pup has had an accident are best cleaned with a dilute solution of biological washing powder. Avoid using disinfectant as this contains ammonia (also contained in urine) and can encourage pup to urinate there again due to the smell.

No puppy is going to be reliably house trained under about 7-8 months old, in my experience. That doesn’t mean you have to have accidents in the house. Rather that the pup is in training and, if there are accidents, it is human error.

Young pups will need to go to the bathroom once or twice in the night for anything from a few days to a few weeks when in training.

If your pup is sleeping in a crate in the bedroom with you, he will wake up and most likely will let you know he needs the bathroom.

Get up as quickly as you can, carry him outside to eliminate and take him straight back to bed again. A few nights of this and it will start taking you longer to find your slippers because of sleep deprivation! Consequently, pup is learning to hold on for longer and will soon be sleeping all night.

If you choose to leave puppy in the kitchen or utility room to sleep, then do not shut him in a crate. Simply clean up in the morning without comment.

In case you have clients who wonder why punishment does not work for house training, here are the reasons.
Let’s take a typical morning in the life of an 8-week-old pup: 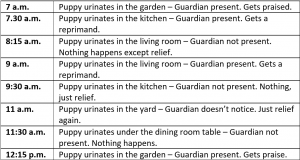 Note: Never deny your dog water in the mistaken belief that this will aid house training. It won’t. It will make the urine stronger. It may also impact on your dog’s health, i.e. cause kidney problems or urinary tract infections if the dog drinks greedily and excessively when water is available, knowing it will be taken away. Dogs must have clean, fresh water available all of the time.

This article was first published in BARKS from the Guild, November 2020, pp.22-23. Read the full article Puppy House Training 101.

About the Author
Sally Bradbury has worked with dogs all her adult life, from RSPCA kennel maid in her teens to founding and running her own very successful dog training business for 20 years. She was also a founding member of the APDT (United Kingdom). Her passion is helping and supporting new puppy guardians raise their puppies to avoid the many pitfalls that result in so many youngsters being handed into rescues in their first year. She is now retired and living in Wales and has recently published the children’s book, Jack and Billy: Puppy Tales, featuring two puppies who experience vastly different journeys in their new homes.