Pushing and Pulling are for Luggage, Not for Dogs 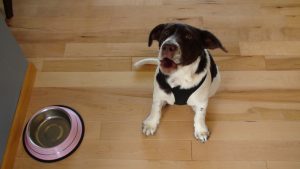 “I am not a piece of luggage!” Photo Credit: Happy Buddha Dog Training

One of my recent puppy clients was a precocious fellow named Colt. He was hardly bigger than the family cat, and it was the first puppy the family ever had. From day one we covered all the basics of raising a puppy, with an emphasis on keeping things safe and fun, and applying the training skills in everyday life.

Each time I work with a “first time puppy” family I am reminded of the enormous amount of work which is required of them, and how easily they forget what I taught them. Coaching the owners is a larger part of the equation than teaching the puppy, in my experience.

One common mistake I repeatedly see is when a family member pushes or pulls the puppy like a piece of luggage at an airport terminal, rather than applying the training.

I returned to the client’s home for our session one afternoon and was greeted at the door by the five-year old daughter and Colt. In her eagerness to let me in the girl immediately pushed open the door and Colt likewise demonstrated his eagerness by moving toward me.

The girl screamed and launched herself at the startled puppy, mobbing it in the process. On other occasions the mother had likewise automatically grabbed Colt with both hands, pulling him back from the door.  Their actions were motivated by fear that the puppy would scoot out the dog and be lost.

As the mother remarked, “It seems so natural for people to just grab a dog. Even my daughter does it.” I gently suggested that her daughter would learn whatever adult behavior was modeled for her, and that screaming and grabbing a dog could result in a bite. Especially with the wrong dog.

It takes a lot of repetition to learn a new task, with friendly and supportive coaching. I am quite certain that when I attended group training classes I forgot things and made mistakes, and still recall how patiently the force-free trainer coached me along and praised my improvement.

We had also been working on kennel training for Colt and he was comfortably relaxing in his kennel on occasion throughout the day and spent his nights sleeping in it. Part of our conversation was about the maximum length of time a puppy should be kenneled. I used my dog, Buddha as an example of what could go wrong.

Buddha was a puppy in 2008 when his family lost their home due to the Great Recession. A friend of the family agreed to keep him. Unfortunately, he kept Buddha in a kennel up to 20 hours each day. When the family learned of this they rescued him but separation anxiety had already taken hold.

Colt was starting off correctly.

When I returned for another training session I was sorry to learn that the owner recently had a very busy day and left him in the kennel for eight hours while she was away from home.  From that day forward Colt refused to go anywhere near the kennel. At bed time in the owner picked him up, like a piece of luggage, and forced him into the kennel, locking the door.  Colt’s fear of the kennel grew stronger.

I spent the better part of an hour working with Colt to change his opinion of the kennel. Three sessions later it is still a work in progress. Fear learning is persistent and difficult to change.

The family loves their puppy and has been keen to accept my suggestions. Although mistakes occur I have seen steady progress. At the end of the last session the owner told me something which gave me cause for celebration.

With a broad smile she said, “Of all the things you taught us, I think remembering to apply the training and stop automatically (physically) controlling Colt has been the greatest lesson learned.”

“Yes”, I agreed, “I think people tend to treat dogs and cats differently. Imagine if you suddenly screamed and grabbed your cat, physically forcing her to do something.  How would that go?”  The owner shook her head and said, “Well, our cat would bite or scratch, and then avoid us.”

I nodded in agreement, adding, “Dogs put up with a lot from their humans, so it is tempting to just hurry up and force a dog to do something.  Training gives us tools to use so the puppy learns how to make good choices and develop self-control.  Shouting and grabbing cannot teach that.”

Indeed, we spent that session working  teaching Colt how to sit on the stairway several feet from the front door and wait to be released when a visitor arrived, or departed. He and his owner performed flawlessly, creating a calm environment and reinforcing one another by their mutual success.  Now the daughter has a different force-free behavior to see her parents model for her.

I learned something too…how to be a better coach.