Recently I worked with an adolescent dog that I trained as a puppy. Like many adolescents he suddenly forgot several of his training skills and got stuck offering two behaviors in specific circumstances.

When greeting people he climbed upon them with his fore paws, seeking attention. And to greet another dog (while on leash) he pulled hard and quickly became frustrated he could not reach them, barking and screeching while his owner strained to keep her footing. 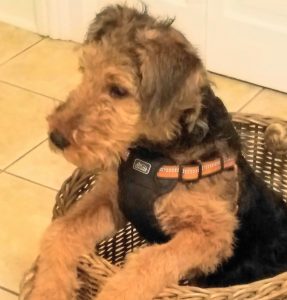 I have observed that when dogs enter adolescence they often develop annoying behaviors and seem to get stuck with those choices.  It is as if they reach into their doggy tool kit and always pull out the same tool in the same situation, never engaging their frontal cortex to come up with better choices.

It would be like me repeatedly trying to use a snow thrower to mow my lawn.

To help adolescent dogs get through their difficult period of transition I go back to basics and remind them they have multiple other behaviors to choose from, which I then generously reinforce. Dogs simply do whatever works for them so I help them find alternative things for them to do which satisfy their needs. 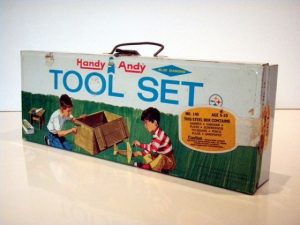 It reminds me of my childhood days when I enjoyed a Handy Andy Tool Set. It came with nifty hammer, tri-square, screwdriver, saw and a pencil. All that was lacking was a first aid kit, which would have been handy indeed, considering the number of nicks and marks on my hands.

As the decades passed I kept the hammer and tri-square, not for sentimental reasons, but because they worked for me. But I did not get stuck with them. When I needed a different tool, I added it to my tool box.  The more tools I had the more behaviors I could choose from.  Over time my collection of tools and self-inflicted workshop injuries grew large.

Rocket is very social teenager and jumped on me repeatedly when he first saw me again, after a four-month hiatus. I calmly turned and walked away (negative punishment) to help him understand that tool was broken, so he had to try another one to get my attention.

He followed me for several feet and after a few seconds I turned to face him, silently giving him the opportunity to choose another behavior. He picked sitting; I excitedly praised his brilliance and stuffed bits of pork and beef into his happy Welsh Terrier face.

Rocket’s expression was priceless, as if to say “Whoa, I forgot that sitting makes you give me attention and food. I’m gonna try that again!” Within a few minutes Rocket offered to sit for me whenever I was not actively working with him, demonstrating the concept in psychology that behaviors which are reinforced (positive reinforcement) grow stronger.

He chose to offer that behavior because it worked for him. Besides, sitting requires less energy than jumping so why work harder when one can work smarter? I repeatedly practiced approaching Rocket and his owner developed excellent timing while reinforcing sitting behavior. When I increased the arousal factor in this exercise Rocket consistently made good choices.

We took Rocket for a little walk and enjoyed the warm summer day, which just happened to be July 4th. The entire village was actively celebrating with yard parties, picnics, walking their dogs and visiting neighbors. All we had to do was hang out and wait for life to happen.

Rocket most often became excited when dogs walked past, but sometimes other things in the environment triggered an arousal response. He automatically reached into his little doggy tool box and grabbed the Pull Hard on Leash and Bark tool. 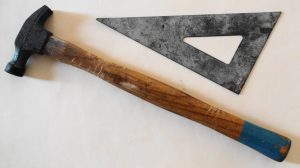 “I’ve only got two tools to choose from.”
Photo: Happy Buddha Dog Training

Whenever Rocket focused his attention on something in the environment, whether he was likely to react to it or not, I calmly reminded him that he had previously learned the Look cue, to turn his head back and make eye contact with me. Within a few trials Rocket remembered that he could see something stimulating, then pay attention to me and great stuff would happen.

This served a dual purpose of classically conditioning a positive response to environmental stimuli of all kinds, and reinforcing the operant conditioning response of looking at and then looking away from things. Suddenly Rocket had the ability to make choices and bring about outcomes he enjoyed. How empowering!

Rocket applied this to kids walking past, cars and trucks whizzing by, a puppy across the street romping in his yard and a lady walking her energetic Border Collie on the opposite sidewalk. All the while Rocket not only stayed below his arousal threshold, but became increasingly relaxed.

When we realize we can make choices that bring about outcomes we enjoy, that reduces stress and develops self-control.  My task as a force-free professional trainer is to help dogs realize there are lots of tools to choose from and encourage them to think for themselves. 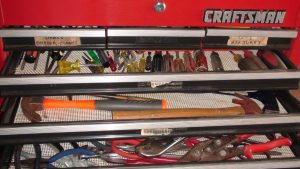 He finished his training session in a confident and joyful state, and his owner witnessed what he was capable of. Rocket remembered that his tool box included Look, Touch, Sit, Down, Leave It, Engage-Disengage and other fun tools with which he could respond to his environment.

It was indeed a July 4th worth celebrating.

Thanks to Rocket and his family for consent to use his name and likeness!