Reflections of a Force-Free Trainer

As I enter my second year of Pet Professional Guild (PPG) membership and the 10-year anniversary of retirement from my first career (and subsequent launching of my second career) I feel it is time to reflect on where I was before and after PPG. 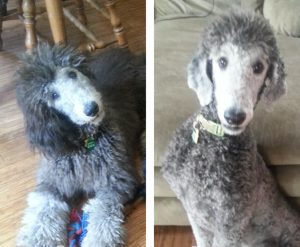 Before and After PPG

Each of us follow our own path and yet we have come together in PPG. In my youth I foolishly thought I was the master of my own fate, determining the course of my life and controlling circumstances through choice. Growing older I realized that had I actually been able to exercise such control I would likely have regretted it and would not be where I am today.

Thank goodness for happenstance that led me to meet two of the most influential beings in my life, and both upon the same day.

On May 13th 2009 I attended a fascinating lecture on canine communication offered by Sarah Kalnajs, CPDT, CDBC at our local veterinary clinic. The clinic hosted an open house including a parade of dogs in the care of The Labrador Connection. That was when I first laid eyes upon Buddha. 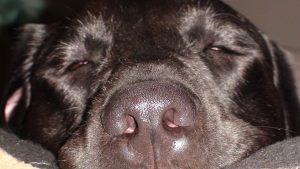 Kalnajs ignited my passion to study canine communication and Buddha became my inspiration for Happy Buddha Dog Training. In a conversation with Kalnajs one year later she asked “How serious are you about dog training?” and I replied that while I was beginning to teach training classes, I enjoyed working in a dog daycare too much to give that up.

The irony is that had I followed my own choice I would have remained in the daycare and never begun a serious study of dog training, or pursue certification, or join Force-Free Trainers of Wisconsin (FFTW).

It was FFTW c0founder Holly Lewis, CPDT who then introduced me to PPG. In fact, she is the (PPG) New Member Greeter for Wisconsin.

Membership in PPG opened up an entire world of education, collaboration, networking and professional development far beyond anything I imagined during that initial conversation with Kalnajs. What a different reply I would give her today, and how far beyond my own myopic view has membership in PPG taken me.

Niki Tudge, founder of PPG, has said this about the work we collectively do: “This is a marathon, not a sprint”. In my athletic youth I was a sprinter and was consumed with reckless passion. Now that I approach my 60th birthday I have finally become a marathon runner and have learned how to channel my passion.

I am happy to support PPG in any way I can and very much appreciate the daily hard work of our founder, chapter leadership around the globe, members of various committees and the thousands of individual members who bring diversity and strength to our organization.

My role is simply a humble volunteer who is happy to pitch in and do my little part in a worldwide organization that is dedicated to the welfare of pets and their owners.

What an honorable goal that is!

Niki Tudge is a pioneer and her high standard of ethics and professionalism remind me of my beloved police mentor, Eldon Mueller. I always strove to meet his high expectations just as I strive to meet the high expectations of PPG. Belonging to a membership organization in which each member strives for the same higher standards is inspiring.

What I respect above all else is ethical conduct and competence, and PPG sets the gold standard.

It pleases me to be a brick in the wall of force-free training and behavior consultation that PPG promotes. We stand together to protect pets and their owners from ignorance and misinformation that permeate popular culture. PPG is a safe haven where we may exchange ideas, offer mutual support and learn from one another. Like a magnificent English castle our organization gives us a steady foundation. 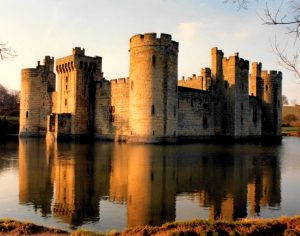 But PPG is more than that. It is also the gatekeeper, creating an open and inviting environment to others that we may respectfully inform and educate, and to whom we offer a warm embrace through programs such as Project Trade.

Three cheers for PPG and all its members around the world. Working together we truly are making this a kinder world for pets.

Daniel H. Antolec, PCT-A, CPDT-KA is the owner of Happy Buddha Dog Training. He has membership in Pet Professional Guild and is Chairman of Advocacy Committee. He also enjoys membership in Force-Free Trainers of Wisconsin and Dog Welfare Alliance.