Reinforce the Behavior You Prefer

Last night I was relaxing on the screened porch with my Labradors, Buddha and Gandhi. The porch faces the backyard and leads to a deck. It is a comfortable and quiet spot where we spend a lot of time and enjoy watching the wildlife. Living in the countryside means the variety of wildlife ranges from mice to deer and coyote, and everything in between.

It started as a hot and muggy day, but by afternoon a cold front swept across the state with drenching rains and cooling temperatures. By the time we settled in the porch it was comfortable, and the critters came for a final visit to our feeding stations before sunset. 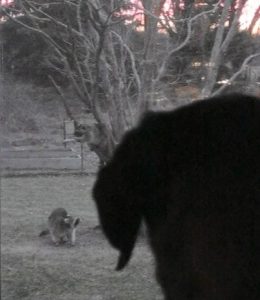 It is my custom to put out a supply of food first thing in the morning and again before dusk. Two young raccoons beat me to the punch and one had climbed a dead tree in the yard, used as a feeding station, while the other tip toed across the deck, probably looking for scraps the birds might have left from the feeding station next to the house.

They startled when I went outside to deliver their groceries, but I was confident they would return. I made a point of putting a generous handful of peanuts and a large scoop of sunflower chips on the steps, just three feet from the porch door. The raccoons live under the deck and I expected at least one of them would stop to feed where my Labs and I could see him up close.

Several minutes passed and still there were no raccoons. Then my wife whispered to me, pointing to a young coyote who was prancing across the yard in the direction of the feeding station. He was much smaller than the coyote I had seen patrolling our property all winter long, and there was a youthful bounce in his step…until he reached the point where I had walked across the yard.  It amazes me how perceptive wild animals are, using their full range of senses.

He abruptly stopped, braced his forelegs and sniffed the ground. His facial expression changed as he turned about face and returned to the woods. Buddha and Gandhi watched in silence.

In a few minutes our raccoon tenant crawled out from beneath the deck and onto the steps. He stood there looking at us, while the three of us gazed back. Gandhi was poised at the right side of the door, watching intently. Buddha stood to his left, his eyes fixed on the raccoon.

After a moment the raccoon relaxed and began eating. It was in that moment that I learned raccoons prefer peanuts over sunflower seeds, or at least that fellow did.

He stopped every minute or so to watch us, then used his fore paws to scoop some peanuts closer and began eating. We were close enough to hear him munching and to smell the peanut scent, wafting on the breeze and into the porch. 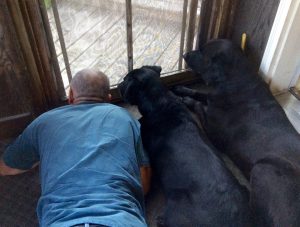 My dogs watched in silence. There was no barking, whining or growling. They did not fidget, pace, paw at the door or lunge toward what they must have perceived as prey. I whispered soft words of praise as their body language relaxed. Gandhi was the first to lie down, on his left hip in a relaxed position. He occasionally turned his head to casually look back at me. Then Buddha moved to Gandhi’s right side, and sat down. Ultimately he laid on his stomach.

I petted each of them, feeling no muscle tension. Their hearts were not pounding with excitement and their breathing was steady and relaxed. They both took turns watching the raccoon and then checking in with me. The longer they watched the raccoon, the calmer they became.

Earlier I had been listening to the movie score of Out of Africa and John Barry’s majestic theme song by that name.  It is a moving melody, mournful at times, and always beautiful.  The film began with Meryl Streep narrating “I once had a farm in Africa” and always brings tears to my eyes.  The music played in my head as I enjoyed a special moment with my dogs.

It took 30 minutes for the raccoon to finish his meal and I smiled the whole time, grateful for the opportunity to watch one of nature’s most beautiful animals, and for the bonding experience with my well-behaved dogs.

But it was not always so.

Several years earlier we were relaxing on the porch while Gandhi and Buddha laid by the door, when another raccoon strolled by. Before I even saw the visitor Buddha and Gandhi had jumped to their feet and burst through the screen. I shouted “Leave it!” before my conscious brain had even suggested the words to me. Fortunately my prior training prevented any harm to the raccoon, but I was left with a screen door to repair…and a new training plan.

I have always believed that we get the dog behavior that we reinforce, and I knew that if we continued spending time on the porch that critters would appear and disappear in close proximity. So I began a training process to reinforce the behavior that I preferred.

Whenever a critter appeared within view, I immediately began calmly praising, petting and massaging my dogs. I let them know how very much I appreciated their calm behavior. If they became too excited by the wildlife follies, I removed them from the porch and shut the door. It was a simple application of positive reinforcement and negative punishment. 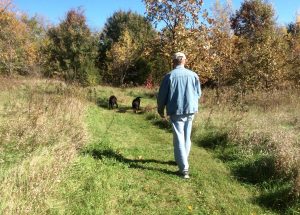 I applied this process whether the critters were songbirds or turkeys, ground squirrels or woodchucks, coyote or deer. Every living environmental stimuli was a training opportunity on the porch, and I carried the process along during our trail walks to generalize and proof the training.

In a very short time each of my dogs demonstrated that they could see a critter suddenly appear, they checked in with me, and relaxed as they calmly watched the wildlife antics. This included the daily vandalism to a wooden rocking chair on the deck which the woodchucks and squirrels nibbled on, to it’s final destruction. It also applied to the four baby woodchucks who engaged in play fighting, just as dogs do, on the deck just outside the porch door.  Likewise the squirrels who crawled past the windows on their way to the birdbath did not phase Buddha or Gandhi, even when they were only inches away.

By making a point of reinforcing the behaviors that I preferred, Buddha and Gandhi learned that controlling their (natural) impulses ensured that the fun would continue, and that an excited outburst would promptly stop the fun. Dogs just do whatever works for them, and I communicated what would work and what would not. They were empowered to make choices.

Our experience with the raccoon last night was one of those magical moments when dogs and people can share a memorable event, as a family. It was also an emotional (classical conditioning) experience for me, as I have an even stronger joyful association with the porch and wildlife sustaining environment which surrounds our home, and the beautiful creatures I have the joy of living with and call my pets.

One day I may write a second memoir, about my life at Wyldhaven.  The first line will read “I once had a farm in Wisconsin”…and I will hear Out of Africa playing as the tears well.  The time we spend with our dogs is too short, and too precious for us to not make the best of it.  Provide for your dog’s welfare and joy, teach them how you prefer them to behave, and enjoy the treasured shared experiences along the way.

For this too shall pass and our memories will have to sustain us.

(If you would like to teach your dogs how to be better company, I highly recommend “How to Behave So Your Dog Behaves” (second edition) written by the late Dr. Sophia Yin, DVM. MS. It is full of instruction to help pet guardians teach their pets. You can also find a qualified force-free trainer by using the Pet Professional Guild search tool, for direct coaching.)