Relationship Is Its Own Reward 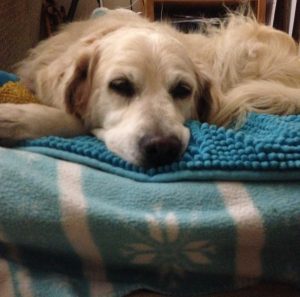 A cardinal rule in education, dog training, anything where one person is trying to affect another’s (person’s or dog’s) behavior is that the trainee determines what the reward or motivator is. If I am not interested in food, I am not going to work hard for it, no matter how tasty you think it is.

A newly published study suggests that many dogs regard us, yes, us humans, as a reward! How cool is that?

The paper, published in the fall issue of the Journal of Applied Behavior Analysis, is called “Application of Functional Analysis Methods to Assess Human-Dog Interactions.” The paper is as inscrutable as the title suggests, but Dr. Stanley Coren does a nice job of parsing it in his column for Psychology Today.

Basically, dogs were tested under a number of different scenarios, and were found to choose to be with their humans. Though only a small sample was used (three dogs), the dogs were tested with five different scenarios. First, they learned to perform a task that would open a door and allow them access to a room where their human was sitting. They actually figured out — taught themselves —a task, then performed it over and over again, just to get to be with their humans.

Then they were given toys or their beds and left in a room. Performing the same task would let them out and give them access to their person. Yes, they chose to leave a relatively comfortable room to be with their humans. They were also tested in a boring room (no toys, no bed) and a human who was working on a computer to see whether they would stay with their person, even if the person wasn’t paying any attention to them, or leave to seek stimulation elsewhere. In all the circumstances, dogs showed a preference for being with their person over a comfy bed, toys, or other options. One of the dogs had a harder time leaving the bed.

Again, this is a very small study. But it tracks with my experience with living with many dogs over many years, and spending time with dozens (hundreds?) of dogs whom I knew well but did not live with. It also lines up with our experience of dogs as great therapy visitors, empathetic creatures, and just plain good friends.

I live in a tiny apartment, but, in addition to the living room where I spend much of my time, the dogs have access to the yard most of the time, a bedroom (with very comfy dog beds), and the kitchen and bathroom,which offer a cool floor in hot weather. The vast majority of the time, Jana chooses to be in whatever room I am in. She gets up and moves if I do. Even if I tell her, “Don’t move; I am coming right back,” she goes with me. Cali is less consistent. If I move, she always comes to see if something fun is about to happen. But she often likes to nap on my bed or hang out outside when I am working in the living room. Even then, though, she comes and checks in very frequently.

When we look at this research along with the “oxytocin looping” studies that show that, when dogs gaze at people they have a bond with, their oxytocin levels go up, it seems clear that the relationship benefits go both ways.

I’m not sure how (or whether) I would use the relationship as motivator or reward in training, but I think that knowing this underscores the importance of the bond. In years of service dog training, I have probably said thousands of times that, while the dog might start out working for a food reward or simply because of good training, once a service dog team has bonded, the dog is working out of love. Many service dogs do work that goes well beyond their formal training, and many anticipate their person’s needs. And, while the Labs and goldens I have worked with are unlikely to turn down a food reward, they certainly don’t need that paycheck to keep doing their jobs.

The more time I spend with dogs, the more I appreciate the true friendship between us; it’s nice (though not necessary) to see research studies confirming that this bond is valued by dogs as well.