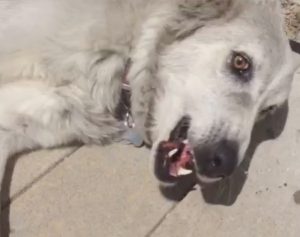 Daisy would give plenty of warning signals if she didn’t want you coming near any object she deemed to be of value. Photo: Susan Nilson

Daisy was a serial resource guarder. Whether this was genetics, early learning, her experiences living rough or a combination of all three, I found out about it the hard way when I walked past her one day and she was chewing on a bone in a doorway. Of course, I should have thought of it but didn’t. I got too close for her liking so she nipped at my shin. Fortunately she had (and still has) a degree of bite inhibition so it wasn’t deep – but she did draw blood. I could say she gave no warning but I have absolutely no doubt that she did. I just wasn’t paying attention. And it’s the same for most dogs. The warnings are there, it’s just that many people don’t see them or know what to look for.

We had picked Daisy up off the street, emaciated and covered in chemical burns. Obviously we had no information about her background but she fitted in so well with our resident three during her “rehabilitation” period that we elected to keep her. Thanks to that unequivocal first experience we learned very quickly that she liked to gather and guard objects, usually shoes and dog leads, but it could be anything she deems valuable at the time – an empty bag, a newspaper, an envelope, a toy, a chewy, a treat, a bone for sure…

If I’d been paying closer attention that first time I would have avoided getting my leg nipped. For many dogs, that nip alone would have been enough for a one-way trip to the vet or shelter. It’s a sad fact of life that so many dogs are abandoned or euthanized or labelled as “aggressive” simply for carrying out what is perfectly normal canine behavior.

In Daisy’s case, rather than give up at the first “offense” and condemn the dog, we instead paid much closer attention to her body language and facial expression so we could better recognize the triggers and contexts for the resource guarding behavior. This is what we quickly learned: first, she would freeze and stare, then she would curl her top lip, then she would growl. That’s three very useful communications right there. She gave you plenty of opportunity to back off. If you didn’t, well then she may just nip you. Did this make her an “aggressive dog?” No. Would she behave aggressively in this very specific context? Yes, quite possibly, if you proceeded to ignore her signals. But since those early days we have worked with her on a specific protocol, and now she no longer feels the need to do it (see also Pet Professional Guild’s Understanding Resource Guarding & Knowing When To Seek Help!)

In the following sequence of photos from back in the day, we see Daisy telling me quite clearly that the giant furry bumblebee is hers. She freezes, then curls her lip, then growls (you can’t see that obviously!) and finally whips her head up to grab the toy before I can get too close. This all happens in UNDER THREE SECONDS. It’s no wonder people get bitten. You can’t expect a child to be aware of any of that. Even for adults, it can be so easy to miss these signs, especially if a) they are unaware of what to look for and b) because they happen so quickly. And the dog gets the blame. Yet Daisy here is so clearly communicating with us, which is a GOOD THING. The last thing you want is a dog who gives no warning. The challenge is for dog owners everywhere to be able to read the signs, to register them quickly, to understand what their dog is telling them and to respect that in order to avoid any escalation of an emotionally charged situation. I’d put money on that reducing the number of annual dog bites by quite a bit. 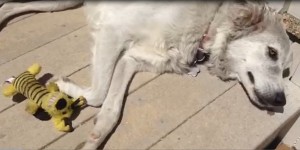 Daisy is already guarding the toy. It’s hard to tell but she is doing a classic “mini-freeze” right here. That’s the first warning 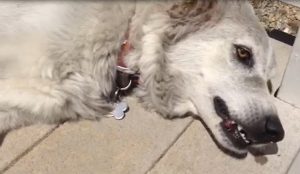 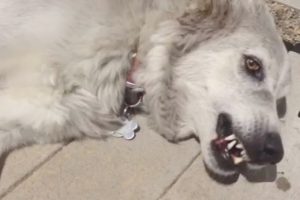 She’s growling (third warning) and the teeth are fully on display, in case you missed the first two warnings 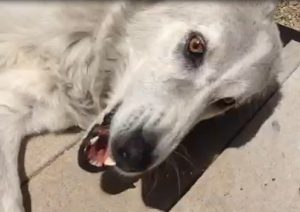 Her head whips round quickly to defend her resource. If someone walked past at that moment or put their hand down to take the toy – or even if she THOUGHT they were going to take the toy – they may well get nipped. Or worse 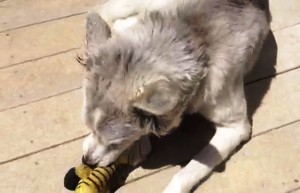 She has retained her precious resource. Panic over