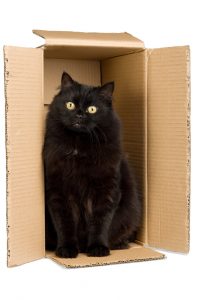 Dear Diary, day 10 of quarantine and the human is STILL sitting in my spot …

Over the past few months, your social media has no doubt been filled with a host of funny memes depicting the plight of cats reluctantly having to endure the presence of their humans 24/7. While these have provided some much-needed light relief in an incredibly stressful period, I believe there is also some truth behind the comedy.

At the time of writing this article, we were in the middle of the worldwide COVID-19 pandemic which has moved millions of people into isolation, quarantine and lockdown arrangements and we’re subsequently spending much more time at home. This is a huge change for most of us. The effects are far-reaching on so many levels and will be felt for some time yet.

But while we’re thinking about how much our lives have had to change in the fight against this potentially deadly virus, spare a thought for our feline family members… Change is not necessarily something cats are all that keen on and this has been an absolutely massive one for those of them who are used to having their home to themselves during while their guardians are out at work.

Broadly speaking, we might say that cats tend to prefer routine and predictability. Knowing when they will be fed, when the humans leave for work or school and return, when the humans go to bed and get up – all of these seemingly mundane things are important for cats, because a predictable environment makes them feel safe and in control. With the humans around more often, routines often go out the window and the cats may no longer be able to predict any of their daily habits.

Many cats also like their space and time alone. The humans head off to their daily routines and so the cats have plenty of space to wander, take a nap, watch the birds, and have a snack, all without interruption. Now they may suddenly be competing for their favorite spot on the couch in the sun and may also be the object of fascination for bored humans wanting to interact far more than usual.

Individual Preferences
Like all animals, for cats, having a choice is empowering. Without their humans around 24/7, cats have more choice about how to spend their time and where to spend it. Now they may have humans in their favorite spaces, picking them up even though they don’t like it, waving toys in their faces, being generally noisy and making their resources harder to access when and how they’d prefer.

Take routines, space, and choice away and many cats find themselves in an environment where they no longer feel comfortable. Some cats will deal with this reasonably well (some may even absolutely love having their owners around more often), but others will not, and behavioral problems could potentially be the end result.

How cats deal with change is individual for each animal and depends largely on three main factors:

As a side note, there’s also evidence now that the age at which kittens are weaned also plays a part in their future behavior (Ahola et al., 2017). But let’s focus on the three main factors above – if our cats are past the critical socialization period, we can’t influence what’s already happened in regard to points 1 and 2 (which has led to their overall personality). However, we can absolutely take the lead role with point 3.

Apart from love and affection, our relationship with our cats should ideally involve some knowledge of cat behavior, what makes them happy and how we can best provide an environment that offers everything they need to be physically and mentally healthy. This knowledge and its application will build a better bond between us and our felines and will guide us in helping them through major changes such as those caused by a worldwide pandemic.

The way I see it, now more than ever, what our cats will benefit greatly from is my feline version of “The Three Rs,” i.e. Respect, Routines and Redirection. And this formula will work not only in the face of a pandemic, but also at any time when a change in our circumstances means we are suddenly at home most of the time when we weren’t before.

Respect
Our first priority is to understand and respect that our cats have specific individual needs and that, often, they don’t like change. We need to respect that cats have their own feelings and emotions and that the changes that have been forced upon us will also affect them. We need to acknowledge this and assist them in adjusting at a level which is comfortable for them and which aims to keep stress levels as low as possible.

Here are some tips, which are particularly important for indoor-only cats:

Above all, respect that your cats may cope very well with all the changes, despite your best efforts, so if your cats need extra help, seek advice from your veterinarian or cat behavior consultant sooner rather than later.

Routines
Keep routines as normal as possible and keep things predictable for your cats:

Redirection
This is normally a term I would use when trying to modify problem cat behaviors such as scratching furniture – you redirect the behavior to a surface that’s more appropriate like a scratching post. But redirection also applies to human behavior. In this sense, I would advise the following:

By respecting their needs, keeping their routines as predictable as possible and redirecting human energy into positive experiences rather than boredom-induced pestering, we can help our cats manage the changes that have been thrust upon us all this year. Of course, when all goes back to normal and cat guardians go back to work, their cats’ routines and environment will be changing yet again. But the Three Rs will help with this situation as well – respect and routines are self-explanatory, whilst redirection will take care of itself as much of the humans’ energy will be redirected back to work and school. Give cats time to re-adjust and keep a look out for signs of stress.

Separation
It is important to note that some cats may have become used to their humans being around all the time and liked it. So, when this suddenly changes and the humans go back to spending long periods of time away from the house at work, school or play, a consequence could, unfortunately, be separation-related disorder.

In a recently released questionnaire-based study, researchers found that separation-related problems (SRP) were more common in cats than most would believe: “The questionnaire identified that about 13% of cats may have signs consistent with SRP according to their owners’ reports.” (de Souza Machado et al., 2020).

While more research needs to be done, SRPs are a very real condition in cats and could become an increasing problem when the world goes back to normal following COVID-19. Having said that, however, I’d like to believe that we can help prevent those SRP figures rising – and manage other potential behavioral issues – if we stick to The Three Rs. If we endeavor to respect our cats’ needs, maintain their routines and redirect our energies (away from smothering and pestering and towards more positive outcomes), then hopefully our feline family members will be able to cope better with both the present situation, and whatever lies ahead.

This article was first published in BARKS from the Guild, July 2020, pp.48-50. For more great content on all things animal behavior and training, you can sign up for a lifetime, free of charge, subscription to the digital edition of BARKS from the Guild. If you are already a subscriber, you can view the issue here.