Judging by the number of people I see walking dogs with retractable leash devices on their dogs it appears the product is popular. They are also unsafe.

As Dr. Karen Becker describes them “A retractable leash is not so much a leash as it is a length of thin cord wound around a spring-loaded device housed inside a plastic handle” in her article “10 Reasons Not to Use a Retractable Leash.” 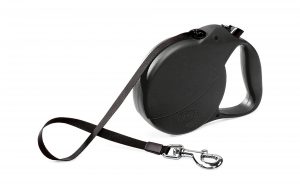 The length of the retractable cord varies from 15-30 feet, and may be locked in place. Pet stewards have told me the variable length appeals to them so they may keep their dog close or let them go sniff about.

But the variable length is also one of the most dangerous features of the product.

First, there may be a local ordinance restricting the length of the leash. Second, non-professional dog handlers often lack the situational awareness, timing and motor skills to lock the cord under exigent circumstances. Third, if the dog bolts or the handler jerks the leash serious injury may occur to the dog or those who may be entangled in the long cord. Fourth, every retractable leash I ever owned broke…leaving me with my dog 20 feet away and no safe way for me to shorten the lead.

While driving to an appointment one afternoon I observed an older lady walking her two small dogs on the sidewalk. The lady was paying no attention to either dog, both of whom were walking in different directions. One dog wandered about six feet into the street before the lady noticed, and then she jerked on the leash as a punishment to the dog. 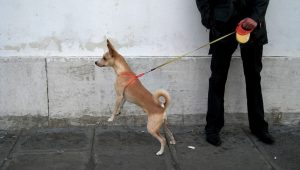 The dog could have been struck by a vehicle, as happened when a motorcycle struck a dog who was treated by Dr. Garret Pachtinger, a critical care specialist. He suspects the dog was hurt more by the yanked leash than the motorcycle collision.

Dr. Debora Lichtenberg wrote “Why Retractable Leashes Are Dangerous” expressing her concern, “I don’t think most people realize how many injuries they have caused.”

In a Consumer Reports News article the author wrote “In 2007 there were 16,564 hospital-treated injuries associated with leashes, according to Consumer Union’s analysis of statistics collected by the Consumer Product Safety Commission. Of those, about 10.5 percent involved children 10 and younger; 23.5 percent involved injuries to the finger. The CPSC’s data does not parse the leashes into types but it’s likely that the amputations were caused by retractable leashes. 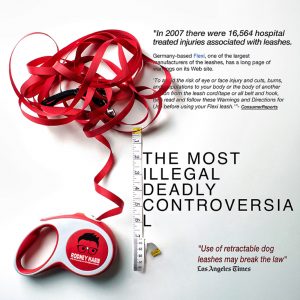 The most common injuries reported were burns and cuts, usually sustained when the cord came in contact with skin as it rapidly reeled out from the handle of a leash. Others occurred when the cord got wrapped around part of the owner or the dog.

Dr. Pachtinger stated two types of (canine) injuries are most common. “The first is muscular, such as a neck strain or sprain; the other is a cervical intervertebral disc herniation, which can be more severe. “ UCDAVIS Veterinary Medicine published a fact sheet detailing cervical disc herniation. 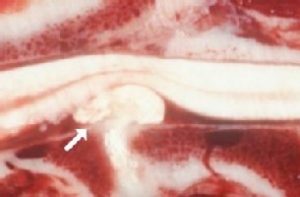 Massage Therapist Eri Suzaki wrote “Concern For Leash Jerking On Dogs – From a Canine Anatomy Stand Point” stating “Leash jerking is still used and recommended by many dog trainers today…but I really don’t see the benefit of it.”

Whether the handler intentionally jerks the leash, or presses the lock button as the dog has bolted, or tries to yank the dog back to them, the damage is the same.

On another occasion as I was driving along a four-lane boulevard with a 35-mph speed limit I stopped in the left lane as a man crossed the street in a marked crosswalk with his German Shepherd. The dog walked beside the man on a loose leash and as he passed in front of my car the man waved in appreciation for yielding the right of way.

With his next step into the right lane a van whizzed by and the man had to suddenly jump back, with his dog still beside him. Clearly the man and his dog had a strong training history and he did not have to yank on the leash. Had the dog been on a longer lead ahead of the man, as is nearly always the case with folks using retractable leashes, the dog would have been killed.

There are other hazards such as when the handler drops the large plastic handle. One of my clients took her leash-reactive dog into the neighborhood on a retractable leash. When her dog bolted at something she lost her grip. The leash hit the sidewalk with a loud sound and then retracted, striking her dog.

The terrified dog ran out of view and was found one hour later, by a search party. The leash had become entangled in shrubs at the edge of the city, where there was little chance he would be discovered by any passerby.

Several other clients told me how they were cut by retractable leashes, and my veterinarian reported treating dogs with deep lacerations due to these devices.

My recommendation is to use a no-pull chest harness with a six foot nylon or leather leash. For those who want their dogs to enjoy the benefits of sniffing and exploring at a distance I recommend a long training lead, and then show them how to safely use it.

Retractable leashes are not often thought of as aversive (shock/prong/choke collars) equipment but they certainly can cause serious harm to people and pets alike.