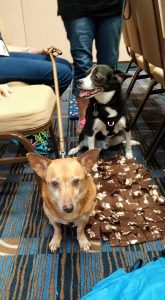 The face of stress! Rio and his friend Rusty at Dr. Karen Overall’s keynote presentation

I was so excited to attend the PPG Summit in Tampa, Florida last month. Tampa is just a bit more than a 2 hour drive for me. And for years I’ve wanted to take one of my dogs to a professional training conference. All the locations have been too far to drive and my dogs are too big to fit under the seat of an airplane. So while I have been fortunate to attend many conferences, this was the first time I was able to take one of my pets. Even better, there were working LABs where I could train my pup with some of the best trainers in the world. The location sounded, and was, great. The hotel is right on the Riverwalk with a small public park down the street. It sounded like a great set up for a successful adventure for me and Rio.

My dog Rio, is a rescue I’ve had for 4 years. He is 30+ pounds of some type of mix breed, maybe Boston Terrier/Beagle. I love the guy, but I am very cognizant of his issues. He came with some baggage, much of which has fallen by the wayside. But, he can be overwhelmed by lots of people, petting and tight situations. I knew the conference would be a big challenge for him. However, I was pretty sure 300 plus force-free trainers would be both understanding and helpful. 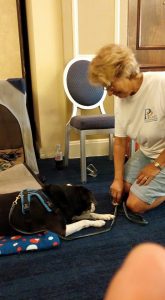 Playing the Bucket Game on Day 3 of the convention

What I didn’t anticipate was the sheer number of people on the Riverwalk and surrounding areas. In the first day, Rio probably saw more people than in his entire life put together. There were bicycles, joggers, baby strollers, Segway’s, skate boards and pretty much every type of wheeled item imaginable. On the water were boats. Some played music, some contained barking dogs, all new for Rio. On the street side of the hotel was a large amount of fast moving traffic with very little buffer. In the park, there were lunchtime exercise classes complete with whistles and jumping jacks. That was outside. Inside were hundreds of people and a few dogs. Not just conference attendees, but hotel staff and other guests, elevators and a dark, steep stairwell. Rio had only spent 1 night in a hotel prior to the Summit. I knew he didn’t like elevators, but I forgot he doesn’t really know stairs. I’m sure he was overwhelmed.

I am actually really proud of my dog. I was correct about conference attendees. They allowed Rio to approach them at his own speed. He enjoyed lots of petting and was pretty much hypnotized by Pat Miller. He did jump up on a table to say hello to Rebekah King, but she is so nice, who could blame him? 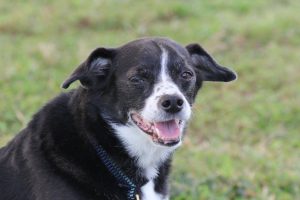 The second night of the conference, I realized all Rio’s triggers had stacked up. The little guy had just too much stimulation. I immediately returned to our room for some much needed down time. And the following day, I skipped a crowded lecture and took a break in our room as well. That really helped Rio regain his composure.

I did have a great time at the Summit. I saw some good friends and made a few new ones. I got to put faces with the names of the great, patient and composed PPG staff. I am pleased with my buddy Rio. I think he enjoyed the majority of the event, particularly The Bucket Game. I am proud of how well he behaved.

Am I glad I took him? Yes, it was a great experience for both of us. Will I take him again next year? Probably not. I think in 2016, I’ll concentrate on MY socialization!