Updated Feb. 25 to reflect Delta’s change: Travelers with trained service animals are encouraged, but NOT required, to provide proof of health and vaccination records 48 hours ahead of travel; passengers should have this documentation with them as Delta might request it. Those traveling with psychiatric service animals and ESAs will be required to provide all required documentation at least 48 hours ahead of their flight.

US-based airline Delta announced January 19 that, effective March 1, it is tightening the rules for passengers wanting to bring service or emotional support animals onboard its aircraft. Given the enormous number of people traveling with service and emotional support animals (not all of them with genuine credentials), this was bound to produce something of a backlash.

Not surprisingly, misinformation abounds, so I’d like to put some accurate info out there and encourage all trainers to educate their clients as well. 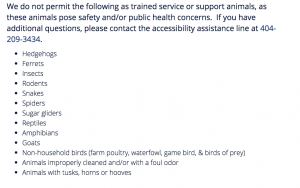 Delta will continue to accept service dogs without requesting proof of training, as they are required by law. But Delta says it will now enforce more rigorously rules that are also part of the law: Their right to refuse to board service animals if they engage in “disruptive behavior,” and their right to require a health certificate and proof of vaccinations.

Because the law does not require any proof of training and because people can train their own service dogs, or anyone can claim to be a service dog trainer, there are many service dogs out there who are not suited to working in public, even if they legitimately mitigate a person’s disability. These include high-prey-drive dogs who might chase someone’s leashed emotional support kitty or lunge at the person carrying a pet cat in a crate. These are the protective dogs who may growl at people or other dogs. These are the scared, stressed-out dogs who do not want to be in noisy, smelly, crowded public places experiencing things that no pet should have to endure if they don’t want to. Qualified service dog trainers weed these dogs out. Unqualified trainers and people who misrepresent their pets do not… and Delta is not alone in having stories of incidents that should never occur with a service dog.

Everyone I know who uses a service dog has stories about encountering untrained and/or aggressive dogs being used as service dogs. These dogs can interfere with their dog’s ability to work and, worse, may be a threat to their own and the dog’s safety. They can also be a threat to the safety of other members of the public. If a service dog barks excessively, jumps on people, growls, or shows lack of housetraining before the plane takes off, Delta can (and says it will) remove the animal from the flight.

Those traveling with service dogs will now have to furnish proof of the dog’s health and vaccinations. The form refers to a “trained service dog” and bears the veterinarian’s license number and signature. An equivalent document with the same information can be substituted but the point is, the person has to have something signed by a vet referring to a trained service dog.

In addition to the health and vaccination information, anyone traveling with an ESA will still have to furnish a letter from their medical professional, using Delta’s form and attesting to the need for the animal as part of their treatment. They will also have to  sign a statement that attests that the dog has been trained for public work and that the person understands that if the animal behaves inappropriately it will be denied boarding or removed from the plane. This is a statement from the passenger, not from a professional trainer, and it is most likely aimed at protecting Delta in the case of inappropriate  behavior by the animal.

Delta is requiring that the documentation for emotional support and psychiatric service animals be submitted at least 48 hours before the flight. They will include the information in a frequent flyer’s profile and it’s good for a year from the date the vet signs it.

There’s been a lot of grumbling on service and guide dog forums about this, but the bottom line is that Delta is using the tools the law allows it to try to rein in the number of animals flying in the cabins of their planes. Their restrictions on size and species will most likely cut down some of the non-genuine ESA access and may significantly reduce the number of pet dogs and cats flying as service or support animals. Much as I would love to be able to fly my (pet) dog everywhere with me, it’s unfair to her and to the other passengers, especially those whose disabilities are truly mitigated by their trained and appropriate animal assistants.

I’m going to be watching closely to see how this develops, and I suggest that anyone who trains or works with service and support animals does so as well!