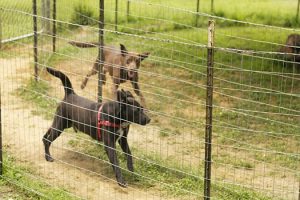 It is often stated that the relinquishment of dogs to animal shelters in Europe and the US is largely due to behavior issues (American Veterinary Society of Animal Behavior, 2008; Miklósi, 2007).

I am saddened but not surprised by this. As a trainer I have witnessed it many times. Perhaps around half my clients have adopted rescue dogs and they often present with behavior issues. With behavior modification and training these can eventually be extinguished in many cases, but it takes time and commitment.

If a shelter is well run and adequately funded, then the training and rehabilitation of dogs can save their lives.

But many shelters struggle with a lack of funding and overcrowding. Overworked staff spend the day maintaining the routine of cleaning, feeding and administering medications. As such, very little time is left for training. Instead, shelter staff often rely heavily on volunteers who struggle to walk powerful dogs with little or no training and few social skills.

We know that training using methods based on scientific research shows us how dogs learn. If a dog is trained using operant conditioning, then he learns behaviors because he wants to, or that he can “make things happen, either good or bad, by choosing behaviors that are either rewarded or punished… [and] can operate on [or manipulate] his environment by his behavior.” (Miller, 2008).

Knowing this (and if we are able to), we can change the environment in order to achieve success in training. Training like this with an awareness of the immediate and distant environmental influences will determine our success rate. Changes in the environment “affect how our dogs behave.” (McConnell, 2002).

It seems to me if we can change our dogs’ environments to help solve the problem behaviors, then we definitely should be doing just that, even in a rescue environment.

In most shelters, dogs are housed side-by-side in metal kennels. Some have doggie doors that allow the dogs to defecate a little distance from where they sleep. Most have no area where they can hide from the public. The environment can be bleak and noisy. In these circumstances it is no wonder dogs are returned because of behavior issues (American Veterinary Society of Animal Behavior, 2008; Miklósi, 2007).

Other rescue groups I work with exist on a meager grant. The dogs may all be housed outdoors in square 10 feet by 10 feet pens with tarps and wood siding to protect them from the elements. Many dogs live in these environments for months with little visual stimulation or training, and behaviors such as barking, digging, fence biting, spinning and aggression are all too common. Monetary restrictions may not allow for professional daily training or environmental enrichment.

Some dogs that are labeled aggressive are in fact frustrated by their environment and their living conditions. They have no outlet other than to bark furiously at the first visitor who walks by.

Environmental enrichment for dogs to a lot of people means giving the dog something to chew on or a toy that encourages mental stimulation but this may not always be enough. Environments for dogs in general are lacking and in this case I am referring to certain boarding facilities or animal shelters, and even some dog owners’ back yards.

When we look to the zoological field and see what we have learned about environmental enrichment – including habitat design – it becomes obvious we have not applied this to dogs.

Exotic animal species in captivity in many cases are better off than domesticated companion and farm animals. It is as though our familiarity born of close proximity has blinded us to what dogs really need.

Enriching the environment stimulates and creates physical and cerebral activity for captive animals. This is no different for dogs. Although every breed has specific genetic traits that influence what is natural to them, the one thing we can all agree on that most dogs do like interaction or play and exercise with humans and/or another dog. (Hubrecht, 1995).

If an environment were designed to aid dogs’ natural development rather than hinder or even suppress it, then maybe we need to rethink of the way dogs are housed.

Standard kennels that are built side by side with doggie doors and runs are economical, easy to clean and allow staff to move dogs in and out without too much trouble. Note how this is typical of all our designs for dog housing, i.e. it is convenient for us but not necessarily conducive to a socially fit dog.

We need to be asking: Does typical housing used for dogs cause frustration? Does it allow movement and interaction and privacy?

When I interview my clients in the first session, I ask them what exercise they provide for their dog. Frequently the response is, “He has the back yard,” or “I walk her round the block when I get back from work.”

Many owners give excessive treats and chew toys or bones to occupy the dog in lieu of an actual activity. I see more dogs today on medication than 10 years ago in an effort to calm them down.

Admittedly, walking or exercising a companion dog varies greatly from town to town or state and country. In Europe it is common practice to walk a dog twice if not three times day because of the lack of space. Most people do not have large gardens or yards.

In rural areas in the US the opposite is true. In my neighborhood we still have roaming dogs, others have farm dogs or, worse yet, dogs chained outside that serve merely to deter the intruder. In these circumstances and based on my own experience working in these areas, little thought is given to a dog’s needs.

In metropolitan areas sometimes dog parks are provided. Most are well-used pieces of land enclosed in a chain linked fence of varying size. Most have no topography of any interest and all have too many dogs and not enough stimulation from the environment, making the dogs more likely to turn to each other. Needless to say, some have better social skills than others and fights are a real threat if the dog lacks adequate socialization.

For the professional working with economically disadvantaged clients, thinking up ways to save the dogs and train the people can be exceptionally challenging.

Determining what a dog really needs is not universal knowledge. Some owners I work with love their dogs as though they are children, yet they may still lack knowledge on what the dog needs. Others I work with treat dogs as commodities and abuse can be just one step away.

Many people come to me with dogs for behavior modification and training, some of which are rescued dogs adopted from the local shelter or a rescue group. Nearly all have the same issues, and have lacked exposure to the right kind of socialization early on.

Dogs who have been rescued or have behavior issues often need a lot of attention and rehabilitation but many owners are simply unable to commit to this. It is labor and time intensive. Also, because the owner is at work most of the day, the dog is either crated or penned outside. When the tired owner returns from work he/she has neither the time nor energy to exercise the dog, much less train him.

Developing a system that utilizes the dog’s environment to reinforce desirable behaviors would be of tremendous benefit in this all too common scenario.

In my work in local rescue, I decided I needed to find a way that would enable people to train and socialize dogs in their respective shelter facilities, so I designed a training circle that is 33 feet in diameter with an inner circle. The alleyway the dogs actually run in is 3 feet wide.

The idea behind this is that the dogs will keep moving as there is nothing to stop them. I also designed a 50 foot ring around the whole thing and draped black cloth over the inner fence so that the inner circle was shrouded from view. This made it more interesting for the dogs as they could not see past the bend.

Now it is all set up, I have clients walk on the outside ring and encourage the “come” behavior from the dog on the inside ring. This aids clients by helping them gain competency and confidence in a hands-off training approach.

Targeting can be practiced by wedging a tennis ball in the fence in order to develop stationing skills. This helps tremendously with jumping dogs and the classic barge-through-the-gate behavior. No one can get hurt using this system.

Young children and seniors can easily work with their dogs through the fence. If animal shelters invested in this design, then even the most elderly or frail volunteer would be able to clicker train the strongest dogs through the fence, including targeting, “walk by my side” or “come.” Moving in a constant circle without interruption even facilitates learning in my experience.

If a plan like this to develop environmental influencers or antecedents was implemented at the beginning of the rescue and rehabilitation process, then we might see a shift in dog behavior too. My circle training ring also enables me to work several dogs at once. The dogs are still able to interact, but because the design is circular, i.e. a “run” that never stops, it encourages uninterrupted movement from the dogs.

Another advantage is that I can place a dog who lacks social skills in one ring, with another dog who is better adjusted socially in a separate ring. In this way the socially well-adjusted dog is able to safely help the other dog through the fence by creating games like “chase me.” The dogs never hit a wall or gate and do not have to stop or turn around.

I have traditional fencing too, which has corners. I observe fence activity as the dogs run to the end and “hit” the right- angled fence that stops their forward movement. Dogs in a fenced area that is square have a different facial expression.

We may want to ask ourselves whether we create adverse behavior from the moment of birth by using standard kenneling.

Are we institutionalizing our dogs without realizing it?

Are we reinforcing stereotypical behavior because of environmental design?

Perhaps if more shelters had training circles instead of standard runs the dogs would be trained more quickly and easily gain much-needed social skills. This could certainly help in the adoption process and the ultimate goal of keeping more dogs in homes.

About the Author
Jane Gerard CPDT-KA has worked with animals for over 30 years. She has trained horses, llama, alpacas, sheep, cows, dolphins, sea lions, seals, birds, cats and dogs in Europe, Bahamas, Mexico and the US. She built her first training and boarding facility in Taos, New Mexico with an emphasis on the natural environment for the dogs and the rescued horse. In 2011, she moved to Alabama and founded her second facility based on the same principles of creating a fun and multi species environment for dogs, horses and some birds. She returned to Taos in 2016 to work as a consultant for the local animal shelter and also owns and operates Jane Trains in Taos. She conducts workshops and classes, has been featured in local radio shows and magazines, and rescues horses whenever she can.