People around the world enjoy the winter season and many nations celebrate a version of Saint Nicholas. In the United States I witnessed an increase in commercialization and marketing hype since I was a child and Christmas decorations now appear after Halloween in my locale.  There is a lot of social pressure to “be happy” during the Christmas season.

Personal and social expectations of “joy and happiness” rose substantially over the years and today pet owners may draw their dogs into the frenzy by dressing them in holiday attire or taking them to photo opportunities with actors dressed in the regalia of Santa Claus. The holiday season can be stressful for people and pets alike.

I should know, for I dressed my dogs in holiday attire and took them to photos ops with Santa. Indeed, I played the part of Santa Paws for two consecutive years at a local dog daycare.

I accepted my first Santa Paws gig out of love for the 200 or so dogs I knew and cherished at the daycare I worked at and I thought it would be a nice way to meet pet owners, enjoy the company of dogs I knew and have some fun.

To fulfill my duty I wore a Santa outfit, stuffed a pillow under the suit to compensate for my flat stomach, wore an itchy fake wig and beard, and sweated away two hours of my afternoon in an overheated costume while a constant flow of pet owners and their dogs paraded up to me. 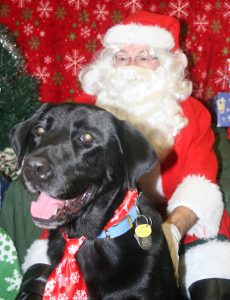 Buddha was happy to see me!

Pet owners looked happy and some were downright giddy about getting a dog photo with Santa to use on their holiday cards or to save in their family photo album. I had not yet begun studying dog training or canine communication and in my naivety I expected all the dogs to be happy to see me.  After all, I was happy to see them.  And they knew me.

Most had been attending daycare at least once a week for several months. The location was familiar to them, or so I thought. I thought they should feel comfortable, right?

In fact, their environment had been altered. Suddenly there was a stage in the corner of a room with piles of gift wrapped boxes and holiday ornaments, a large chair set in the middle of them, and I sat upon the chair.  Things were quite different.

I had been altered too. Suddenly I appeared much larger than my frame, wearing a wavy wig and full beard with only my familiar eye glasses poking out. The entire costume was bulky and billowy, in a bright red color dogs were unable to register due their inability to see red. Large boots finished the alteration and I was no longer a familiar friend. 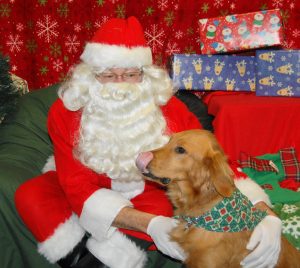 One of my favorite dogs was frightened of me.

Playing my role as seemed appropriate I bellowed the requisite “Ho, ho, ho!” in a deep tone. I had not heard of Morton’s Law of Sound and did not realize the low rumbling vocalization was frightening to animals.

Pet owners took turns leading their dogs up to me, in very close proximity so we fit nicely in the camera frame. Indeed, we were forced nearly cheek-to-cheek…and then the dogs were expected to peer into the unblinking eye of a camera lens and look “joyful.”

When I think about it now, as a certified canine behavior consultant, it baffles me that I was not bitten. Or maybe I was… 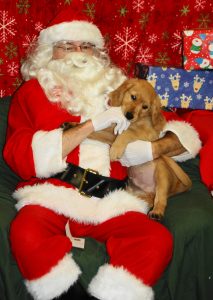 To be honest, some of the dogs recognized me and were happy to snuggle or sit beside me. Others were clearly reluctant, stressed and frightened. I do not label them as the Ebeneezer Scrooges of the dog world.  Their stress responses were quite normal, and were ignored.

We each played our part, plowing ahead to satisfy holiday expectations, Jingle Bells all the way! Holiday photos were taken regardless of the dogs’s stress. They had no say in the matter and we got our treasured photos.

What I missed was obvious.  Once I learned what to look for it was painful to acknowledge: reluctance to approach, looking away, leaning away, paw lift, freezing, shaking, yawning, tightly closed mouth, lip licking, nose licking, whale eye. The list of canine stress signals goes on and on, and I missed them all.

So did the dog stewards. 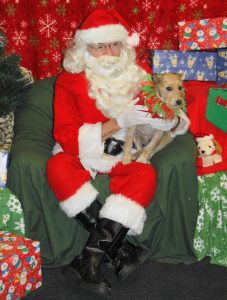 By the time I was invited to my second annual Santa Paws gig I had been studying canine communication for some time.  I learned enough to be uncomfortable with what I saw.

My education began with a presentation by Sarah Kalnajs and the purchase of her DVD “The Language of Dogs: Understanding Canine Body Language and other Communication Signals.” I also read “Canine Body Language: A Photographic Guide” by Brenda Aloff repeatedly until I no longer saw anything unfamiliar.

I still looked forward to the photo event because my relationship with the dogs was even deeper, and I had missed seeing the stress signs the year before. As I sat upon the Santa throne I waited for the first dogs to appear…and then I began seeing in real-time the stress signs I had spent months studying.  Oh no! 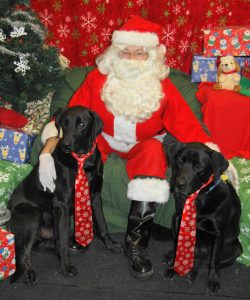 Even my own dogs became stressed.

The joy went out of the event and it saddened me to see so many dogs being forced to endure something they clearly wanted no part of, to satisfy the desire of their owner to get a holiday photo with Santa. I felt guilty for my part.

Once again, some of the dogs were soft and wiggly, relaxed and playful. The majority were not, and some were downright frightened.

Keeping my commitment to the daycare owner I finished the event. I also packed up the Santa suit, returned it and finished playing Santa Paws for good.  Now that I know better I can do better.

My advice to pet owners is learn how to read your dog for signs of relaxation and joy, and for anxiety, stress and fear. Additional educational resources are abundant and include DogGone Safe and I Speak Dog. When you recognize stress in your dogs you have a duty to be your dog’s best advocate.

Some dogs enjoy doing silly things with their owners, but many dislike being forced into costumes or being dragged on leash to some stranger in a Santa outfit. Forcing dogs into an emotional state of flight-fight and then taking away their flight option is a quick path to (defensive) biting.  For that, they (and you) may suffer.

Nobody wants to lead their dog down that path, right?

If you strongly desire that special holiday photo for your Christmas card, just Photoshop your dog into a scene with a Santa Claus. Nobody will know the difference and your dog can enjoy the holiday season after all.