Congratulations to Kristin Laurene! This post won runner up in the 2022 Canine Scent Writing Competition.

It is definitely not a news flash to any dog owner that a dog’s sense of smell is its strongest. It is also not surprising to hear about dogs stuck in shelter environments getting bored and unwanted behaviors developing, or further strengthening, due to lack of regular mental stimulation. However, pets in shelter and rescue environments are not the only pets who experience lack of mental stimulation.

Three professional detection-dog trainers and handlers realized how far-reaching the problem could be in dogs owned by civilians and came up with the idea of K9 nose work as a fun and rewarding experience for both dogs and handlers. Nose work provides mental and physical stimulation for dogs while employing their strongest sense, as well as an opportunity for handlers to create a stronger bond with their dogs and gain better observation skills, as they learn to recognize how an individual dog indicates locating a particular odor. Although nose work is still a newer sport, comparatively, it has gained popularity among dog owners wanting to build a stronger relationship with their family pets and dog sports enthusiasts alike.

I was introduced to nose work about six years ago while volunteering on the dog team at a local branch of a national rescue and animal welfare organization. I had never seen the game played, but the concept certainly made sense and seemed feasible. The canine world is ruled by scent, and dogs commonly have their noses to the ground exploring those scents, so locating the source of an interesting smell is already a species-typical behavior.

In the facility, toys or high-value and somewhat smelly foods were used as the hidden items, depending on a dog’s preference, so the learning curve was not very steep. Therefore, the dogs were set up to succeed right away. This allowed the dogs to maintain, and more often increase, their interest in the game, as it became progressively more challenging. The setup of the yard made it convenient to teach the dogs to go into a holding kennel between runs while the hides were reset and the box configuration changed, to keep the pace consistent. 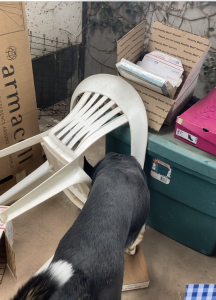 Peep is very thorough in his searches. © Kristin Laurene

I quickly realized that the beauty of nose work, among other things, was that its participants had no specific requirements, which is gold in a shelter setting. Dogs of any size, breed, shape, age and activity level could participate and reap the benefits of the game, with very little modification to the setup. Every dog we introduced to the game understood its goal and figured out how to make us initiate another round, whether right away or after a session or two, by heading toward the holding kennel without a cue present. I believe that the empowerment the dogs felt in that situation helped increase their enthusiasm, and thus the value of the game.

It also helped build confidence in dogs who were shy, timid or lacked trust in humans. There is very little direct human-dog interaction in nose work after the hides are set and the dog is released, so a dog does not have the burden of a person in his or her space, or a person cueing every behavior. The dog has the freedom to explore and discover his or her rewards alone.

For the past couple of years, I have spent more time and placed more focus on working with city shelter dogs, as the dog-handling volunteer population at these facilities, compared with completely no-kill facilities, is much more difficult to maintain. When I started volunteering at the city shelter, there was little time or capacity for enrichment activities, but the city recognized the need for it in the public shelter environment. The city initiated a program of activities geared toward relieving kennel boredom and reducing length of stay, and the creators were open to any ideas and activities that could alleviate stress for the resident dogs and create problem-solving opportunities.

I began working with a few dogs who were struggling in the shelter environment, mostly working breeds like German shepherds and Belgian Malinois, and utilizing an area with a corridor and open kennels along one side for nose work. Since no costly items are required for nose work, I gathered a bunch of boxes of varying shapes and sizes, a handful of small deli counter containers for my hides (to prevent contamination of the boxes with the scent of the hidden items), and some string cheese and high-value meat treats from home. The shelter also had a few squeaky and plush toys, so I was off on my journey to get those dogs thinking and problem-solving. We do not have the materials or resources for training to locate specific scents, so we just used the toys and treats on hand.

I expanded the group to younger dogs, seniors, dogs with minor medical concerns, dogs released from bite quarantine or observation, timid dogs and dogs with limited mobility but who needed to get up and move. Nose work has no limits and has done wonders for several of the dogs who might have had drastically different outcomes without it.

It is fairly easy to tell when a nose work session has been what I would consider successful at the city shelter. Dogs return to their kennels with a more relaxed body posture, a slower pace and less leash tension, and I often found them lying down on their beds in their cubbies or chewing on a long-lasting chew toy within 15 to 30 minutes after the session. My hope was that more relaxation time would help combat the increased cortisol levels and anxiety the dogs experience living in a loud and unpredictable environment, even for short periods.

It amazes me how quickly a dog’s attitude can change once the dog starts playing the game and has a “light bulb moment.” The wheels turn faster and faster as dogs find one item in one box, then check two or three boxes for the item, then graduate to more complex searches, multiple items in multiple locations, and then exponentially increase their skill levels as they progress to more challenging searches. Some dogs actually appear to light up emotionally as they grow their skill set and meet more difficult challenges. Some dogs have more natural talent than others, but all dogs seem to understand and enjoy the game, and most do not want to stop playing.

The most rewarding moments are when dogs who were previously struggling, with little adoption or rescue interest, excel in nose work in the shelter and then are rescued or adopted by someone who continues working and playing with them. One of the young dogs, who had a history of trust issues and was at risk of a negative outcome, impressed a rescue so much with his nose work talent that the rescue saved him and trained him to a level where he may be contracted with her, but will be taking a State Law Enforcement Division (SLED) test for possible employment in law enforcement. Recently, another young dog in a similar situation improved so much after beginning clicker training and nose work that he, too, was rescued and will be given a chance to rise to his full potential.

Nose work is a powerful tool in any environment and with any dog, but in a shelter setting, it is truly a life changing and often lifesaving gift, and I am grateful for its development.

Kristin Laurene is an amateur trainer (she has not taken the CCPDT certification exam yet) who volunteers with her city shelter, the local branch of a national animal welfare organization and a national animal sanctuary. She loves working with dogs, pigs and horses, but her passion lies in systematically working with dogs that few, or no, people can or want to handle, beginning with simple classical conditioning and DS/CC, often with protected contact, to build trust and a relationship, and then working with the dogs to change their behavior and ultimately help them find forever homes.
Tweet