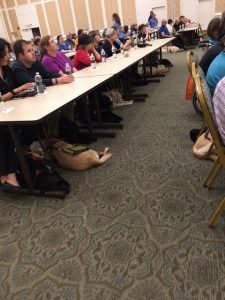 A few weeks ago, I was part of an amazing experience — the first-ever continuing education weekend seminar for guide dog teams that included trainers and puppy raisers, as well as 80 teams. The weekend was organized by the Guiding Eyes for the Blind graduate council. Actually, it was two members of the council and their partners (including me). It was a lot of work to pull it off, and as the teams started arriving, we all had a moment of panic. But the weekend was an enormous success — and it made clear how much of a need and desire there is for continuing education among these teams.

Eighty grads attended. They traveled from all over the U.S. and Canada. The registration filled up within days, and that was more than a year before the conference. Even with inevitable cancellations, every grad space was filled. There was a waiting list. We limited puppy raisers to one per region (40 total). We could easily have had many more.

The school was generous, offering some funding and lots and lots of staff assistance. More than thirty trainers attended. Every grad team had the chance to work on issues they were having, whether with dogs being too interested in food on the ground or other issues common to working Labrador teams. Most of the teams are Labs; a few are German shepherds. 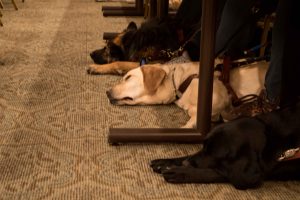 But the weekend was about so much more than problem solving. In fact, the teams were flawless. During two plenary sessions, eighty dogs relaxed under tables, silently, calmly, perfectly behaved. As dogs met in hallways and under small tables at meals, there were no issues. Dog play (supervised by the trainers) went flawlessly.

So why do they need continuing education? These people are thirsty for information. People love teaching their guides “off list” cues and trade stories about what their dogs can do. Popular tasks are finding a restroom, an exit, or a trash can. Others include tucking the tail on entering a car, shaking off after a bath or on exiting a restaurant (putting on cue can keep the dog from doing it inside the restaurant). Even retrieving, which is not commonly taught to guide dogs and can be immensely helpful to a person who is blind or has limited vision.

Puppy raisers want to learn, too. The puppy raisers were keen to learn the latest research and find out from the grads what issues they have with their dogs — and how those might be avoided by different training during puppyhood. They were interested in learning about the training methods used with their dogs … though, sadly, not all would pass muster at PPG.

The point is, offering courses or seminars aimed at guide- or service-dog teams that could offer problem-solving or additional task training looks like an untapped niche market. The Guiding Eyes grad council is already planning the next weekend. But there are many, many teams that don’t have access to such an event. It was fun and educational to see this group, but more than that, it was exciting and very rewarding to be part of it.