Seven Stages to a Bite 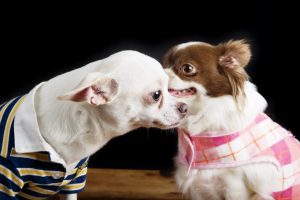 Canine body language can be subtle and complex; dogs almost always give a number of signs that they are feeling stressed. Graphic © Can Stock Photo

It’s sometimes good to remind ourselves of what our dogs are. Dogs are relatives of the modern day wolf, both having evolved from a common ancestor. Is it not fascinating that when we chose to domesticate an animal, we chose a predator and welcomed him into our homes. Irrespective of the form the current dog takes, he does share genes with a predator and those instincts will expose themselves in extreme conditions. What I am getting at is that all dogs, if pushed far enough, can bite!

When a dog bites, it’s rarely out of the blue. There are several signs the dog gives us. Canine Behaviour Consultant Turid Rugaas identifies seven kinds of stress signs that can be observed that often precede a bite. Learning to recognize these can help take corrective action early and prevent bites.
At the first there are  Displacement Behaviors and Calming Signals. Displacement behaviors include scratching or sniffing the ground. Calming signals include yawning, lip licking, looking away, turning the head away and moving slowly. A dog may exhibit one or more of these behaviours and signals.

Humans have similar behavior. Imagine yourself in a social situation with two people starting to get into a heated argument. You might find yourself have displacement behaviors like shuffling your feet or clearing your throat awkwardly. You might find yourself trying to defuse the situation by making a joke or changing the topic. That’s exactly what your dog is trying to do with Calming Signals. The dog is attempting to defuse the situation.If the situation does not defuse, then the dog may start showing Stress Reactions. The dog may start panting, shaking off adrenaline, sweating under the paws, trembling, shaking, showing the whites of the eyes, raising the hackles and dilating his pupils. When under extreme duress, we too show similar signs. Think about the last time you were shaking with anxiety. That’s how your dog feels when he is shaking.

t this point, if the threat is still not neutralised and the dog is not seeing an option of leaving, he will start to Focus. There will be no more calming signals. The dog may close his mouth shut and just freeze. If we were pushed to a corner and saw an inevitable threat heading our way, then we too would focus. Basically we are preparing to defend ourselves.

Dogs warn that they are ready to defend themselves by some ritualised behaviours. There might be growls and showing of teeth. At this point, your dog is using every last resource he has to let everyone around know that he is feeling immense stress and he is not finding a way out. So he is preparing to act. Finally, if none of his several attempts to communicate worked, he will go for a Lunge and finally a Bite.

So you see a bite is really the last option for your dog. He has a wide repertoire to communicate his feelings. But his language is subtle.  He may move from one set of signals to the other, trying different tactics to communicate with the environment around him. As you can notice, very little here is vocal. So we really need to watch and look carefully. These signs will be swift, but will be there for sure.

Sometimes a dog may bypass a lot of this and go straight for the bite. Such dogs may be ill or have had an extremely traumatic past. But this is very rare. In most cases, it will suffice just to start reading your dog’s language and then take him out of any threatening situation at the earliest possible. As he learns to walk away from stressful situations, he will learn that he has the option of walking away. That will give him confidence to start facing his fears.

Science News. (2013, January). Why wolves are forever wild, but dogs can be tamed