Shaping without a Clicker 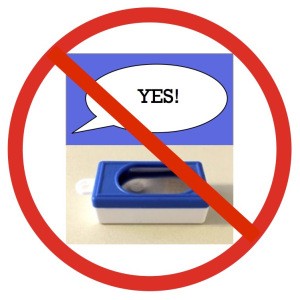 Most trainers agree that if there is one thing that the tool called a clicker is useful for in particular, it is for shaping behavior. Shaping consists of marking and reinforcing successive approximations towards a goal behavior. When shaping, the trainer can find herself needing to mark very small or quick movements indeed, sometimes just a weight shift or a breath. When that is the case, the behavior is usually long over by the time one can get food or a toy to the animal.

A clicker or other marker can form a “bridge” between the behavior and the reinforcer, letting the animal know more precisely what behavior we are attempting to reinforce.

The other day I was in a discussion, a common one online, about whether a clicker or a marker word is better for training in general. (Guess what–I have a blog post coming out about that soon!) Someone said that in any case, a clicker was necessary when shaping. I said that it wasn’t. The discussion went a different direction after that, so I decided to demonstrate here what I mean.1)

Everybody who thinks they are about to see three shaping clips with the trainer using some other kind of marker–think again. In these three movies I shape three different dogs to do three different behaviors with no marker at all. No deliberate one anyway.

In two out of the three clips, the dog is working at a slight distance from me, so in that case my motion to throw the treat becomes a marker when they see it. In fact, at one point (in a video not shown here) I did the equivalent of clicking and not treating: I wound up to throw but held back. I saw Summer notice that, bless her heart, but she soldiered right on when she saw that I wasn’t going to throw.

Doubtless the dogs picked up on other behaviors of mine that mean, “Food coming!” But that happens when we use a deliberate marker as well.

Why even try such an odd thing?

It’s a learning opportunity, and quite an interesting one. When you take away the marker, what you have left to work with is placement and speed of treat delivery–things that skilled trainer seek to optimize anyway. I would encourage any trainer to try it as an exercise. One of the challenges when working at a distance and throwing treats is whether you can successfully anticipate the animal’s movement and start your throw so that the treat arrives right as she does the behavior. It’s a gamble. Either you wait and the treat arrives late, or don’t wait and risk a “false positive” throw when they didn’t do what you wanted after all. (For instance in Clara’s video, at 2:36 and 2:54, I accidentally reward a weight shift when her paw ends up not moving, well after I should have finished rewarding weight shifts.)

I noticed that I started watching the dogs’ bodies with the intent of predicting when they would make a certain movement. This is a valuable habit for marker training–something I should be doing in any case. But taking away the marker forced me to improve. I learned some things that I think I will retain about how my dogs balance their bodies and how to predict their movements.

If you want to watch only one movie, watch Clara’s. It was the biggest challenge and the most interesting.

Zani’s Task: Nose Target a Piece of Tape on the Wall

This is a known behavior for Zani, and in a known place, but she still had to figure out where to go within our working area, and then to notice and respond to the tape. I deliberately handicapped myself (in addition to not using a marker) by sitting at a distance from the tape.

Summer’s Task: Paws Up on a Chair

Again, this is a known behavior. But we have never practiced it without me standing right there, so the distance was new. Also the towel I put on the chair changed the look of the situation. In an earlier session with Zani, not shown here, I had really screwed up my setting factors. I tried to shape Zani into paws up position on the chair, and actually did succeed, but it took a while because of the following drawbacks:

So when I tried it with Summer I placed a towel to pad the chair seat a bit and also to block the most direct path under the desk. I also switched to cheese, which is less prone to ricochet. (Lucky Summer!)

I stayed seated until she got the paws up part, but I did jump up at the end to treat Summer in position when she made it up there.

Summer is my crossover dog, but also the most inventive of my three. Be sure to catch her signature shaping move, a kind of sashay while tossing her head. The best one is at 0:59.

I am really proud of this one. With the other two behaviors shown, a critic could say that just by loading treats over into the area where the target behavior was, I was almost luring the dog  (even though we often do that when shaping with a marker as well). So for Clara, I deliberately picked a behavior I had never trained before that didn’t involve going to a location. This was completely new for Clara, as was the actual behavior, the paw lift (on a side designated ahead of time by me). Also, I’ve never shaped this kind of body movement with her before.

The thing I really like about both shaping and capturing is when the target behavior becomes more frequent and more exaggerated, seemingly even before the dog “knows” what she is doing. You can see Clara’s left paw movement get more frequent and more pronounced starting at about 2:00 in the video. (Yes, and you can see me miss reinforcing some really good ones.) It’s pretty amazing how fast she got it considering that there was a varying time lag between her foot movement and the treat.

You’ll see in Clara’s video that she is slow to get started and also leaves the session twice for a few seconds. There were a couple of reasons for this. When I do nose work in the house with my dogs, I get them to stay out of sight and then release them into the target area. I don’t have a verbal cue for it yet (my bad). So when I released Clara to enter the area, it’s pretty clear she thought that’s what we were doing. It was exacerbated by the fact that I had been using homemade chicken brownies and mozzarella cheese earlier, but I was down to using small kibble at this point. So I don’t blame her for taking a few sniffs around to make sure she wasn’t supposed to be hunting something down.

Do I mind that my dog wandered off in the middle of a session? At first I did–dammit, I was recording! But then I reminded myself that she has that choice. Clara had already had a few sessions and eaten quite a few different types of treats, so the value of the current reinforcement was low, especially considering the difficulty of the task. I have tons of value built with working with me already and she’s normally a very focused worker, so her leaving was not worrisome, as it might have been with a different dog. (Also, the sniffing was clearly with a purpose; Clara was not leaving on account of any stress.)

Often when people talk about giving their dogs choices it centers on the choice to leave something that might be aversive, such as getting their nails trimmed, or seeing one of their triggers. That’s a given for most positive reinforcement based trainers, and my dogs have that choice as much as I can possibly provide it. (Exceptions being things like vet visits, but I strive to make those as non-aversive as possible.)

But in this case, Clara was choosing between two positively reinforcing activities: a shaping session and sniffing around and possibly finding a high value treat. It makes me happy that she and I have such a great relationship that I can give her this choice.

And hey, she came back and NAILED it!

So here’s a challenge if you are interested. If your dog is already shaping-savvy, try shaping without a marker. (If you typically use a clicker or other marker for everything, you might want to experiment with leaving it out while doing something a little easier than shaping at first.) And let us know how it goes. You can even tape your mouth shut. I did for our first sessions!

Author’s note: This idea is not original to me. I originally read it years ago on the Yahoo group ClickerSolutions, but I don’t remember the author. I’m sorry that I can’t make a proper attribution.