Socialization — Rolling with the Punches 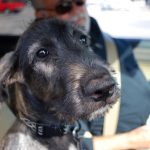 Oona learns to ride in the car without stressing.

Oona, my Irish wolfhound puppy, is about to turn 15 weeks old. Depending on which studies you follow, her developmental window for socialization is now closed or is closing fast. Adolescence is upon us — the wild child phase. We’ll see if I got it right this time.

I had a year to plan extensive details for her socialization while waiting on my breeder’s list for Oona’s litter to be born. I’m certainly no pro at it. It wasn’t until I got my first wolfhound, Finn, that it sunk in how critical proper socialization is. The body of canine research is growing and passing on to the public in torrents these days. But seven years ago I just knew socialization was something I needed to do with Finn, along with puppy training and taking care that a crazy wolfhound puppy didn’t pull me off the porch. Again. I knew it was critical that Finn be exposed to a checklist of sights and sounds so he could grow his social “muscles” and be ready to cope with the crazy human world without fear. Fear from bad first experiences leads to a host of troubles that are easily avoidable if you simply get your puppy out and give her positive first encounters. 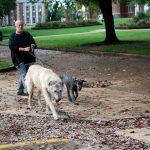 Oona walks with the author and an older Irish wolfhound seeing new sights.

But now I see that socialization is more than checking items off a list — walking on sand, hearing a fire engine, meeting strange dogs, encountering elderly people with walkers, going in and out of automatic doors. They need all that, yes, but they need to be exposed to it in doses measured specifically for the individual puppy and her given temperament. Each novelty should be a happy introduction, not a harrowing experience. It’s positive associations. It’s all about encouraging a dog to be rock-solid confident, especially if you plan to travel and be out and about with your canine friend. It’s the beginning of your partnership. It’s the foundation.

It’s also about being flexible and overcoming setbacks to your plan while the clock is ticking. Because as meticulously as you plan a socialization program, it can quickly lurch sideways as you and your puppy encounter the real world. 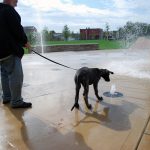 Oona tentatively examines the water jet at a municipal fountain.

Wolfhound adults are famously unflappable. They’d sit and study a hurricane if one broke over them before strolling for cover. Nonetheless, Finn as a puppy developed a fear of flapping plastic sheets and the sound a skateboard makes when it slaps the pavement and grinds along. If he even sees a skateboarder now, we’re suddenly scuttling off the other direction. So skateboarders are something Oona has happily encountered, first at a distance, then slowly closer as she showed curiosity and not alarm.

And, I was lucky enough to have a well-read breeder who created an amusement park of toys and obstacles for Oona’s litter before she sent them out into the world. She hung a sheet of plastic from a fence so it would flap in the breeze. She put up brightly covered spinners, set up teeter boards and tunnels. She set up tug ropes that rang cow bells. And she let them play in and out of travel kennels because one of the 14 would be flying in one to California and another to Wisconsin. And she turned Oona over to me for a brief ride to a friend’s house, then… a 12-hour ride from Florida home to Tennessee.

It was Oona’s second time in an automobile and it was unavoidable. My wife and I left at 3 a.m., hoping to shave off several hours of the journey in darkness while Oona slept. She didn’t. From her viewpoint, the car was a scary place. Strange roaring sounds, gears shifting, bumps and lurches, a spray of lights, a virtual spookhouse of the unexpected and unexplained. When we took the hourly puppy bathroom break at a rest stop, an 18-wheeler vented its air brakes and badly startled Oona. She curled up in a ball on the seat next to my wife. It was not an auspicious beginning.

Oona was 11 weeks old when we brought her home. I prefer doing it at eight or nine weeks, but my work schedule and my breeder’s vaccination regimen delayed us. So, Oona had between two to five more weeks left before her socialization window — her young brain’s special period of openness to novelty — closed. And, it wasn’t a complete surprise at home when Oona balked the next time we walked towards the car. Since we live in a rural area, the car is going to be Oona’s ticket to fun. And, more urgently, to full socialization in town. And in two days, she had to go to her initial puppy checkup at the vet. We were in a quandary.

But we didn’t force her. We spent five minutes a few times a day just sitting in the parked car feeding her treats. Then we fed her a meal in the car. Then treats with the engine running. Later, treats backing down the driveway, then back in again. Then treats for a short ride around the block. Finally, lots of high value treats — roast chicken and cheese tidbits —  on the way to and from the vet’s office. We paced it, let her adjust, and made this car ride a tasty encounter. 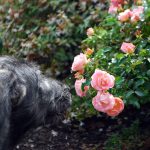 It’s a new world of experiences for a wolfhound puppy.

In the meantime since road trips were out, I worked on trust. She’s a loving puppy but my wife and I were still strangers to Oona. We spent a lot of time cuddling, talking, walking her around the yard and playing games. We became acquainted. I introduced her to clicking and treating and we built rapport. She met cats, the neighbor’s dog and baby, she watched autumn leaves twirl to the ground, she walked in the rain. It’s all socialization when your environment is new.

And the point we made to her is that we’d do things at her pace, the world is a fun place and we were right there by her side, day or night. By the next week when we neared the car, she was ready to climb in.

There were of course other hitches in my carefully laid plan. The college campus here is a great place to socialize a puppy to people of all types, ages and ethnic groups. The campus plaza is the ideal location to sit on a bench and safely watch it all before building to up interacting with new people. The week I brought Oona home, they fenced it in and plowed it under. Renovations. So Oona and I found quieter corners of campus and built on those encounters. She was soon walking happily down the sidewalk, meeting new people, seeing students play ball, rollerskate, ride bikes and play musical instruments. We improvised.

I enrolled Oona in a local puppy class solely so she’d interact with other young dogs. As luck would have it this session there were no other puppies. At least her obedience training was under way. And we used friends with calm, reliable dogs to meet and greet.
Did I mention the monsoons? It’s normally Indian Summer here, but Tennessee has had one of its wettest autumns in years. Days of relentless rain followed by showers that always seemed to pop up when Oona was awake. All puppies sleep a lot. The trick with young Irish wolfhound puppies, who undergo outrageous growth spurts, is finding the odd hour when they’re fully awake. When rain was coming down sideways, we went to the two stores in my town that allow dogs inside. More fresh people and new sensations. All encountered while we carefully watched our puppy. And — this is important — while we stayed reassuringly calm and upbeat. The few times she startled, she came back to us, quickly rebounded and went back for another dose.

So my painstaking socialization plans became a by-the-seat-of-my-pants undertaking. But the principles were the same: Novel experiences with happy outcomes that built her confidence and her trust in us.

We tested it one night this week by taking Oona to a sidewalk table at a coffeehouse on the town square. More rain was on the way. Fall leaves skittered down the sidewalk in a howling wind and a stream of students hurried by to beat the storm. Cars whizzed past just feet away. Traffic signals flashed red, yellow and green. We sipped our coffee. Oona laid by our feet, watching the night, interested, but calm.
So far, so good….