..may break my bones, but words will never harm me” 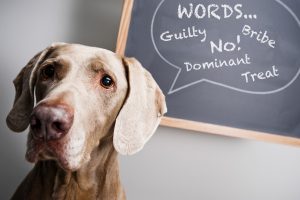 This, or one of its variations, is a childhood phrase that most of us are familiar with. We know that physical violence hurts and, as is suggested by the rhyme, words cannot cause harm. Or can they?

As a dog behaviour counsellor and trainer, there are several words which, when used in connection with dog training and behaviour, I think harm our relationship with and understanding of our dogs.

Our world is filled with words – be it online, through the media or face to face chatter.  Words come in and out of fashion, new words are added (on an annual basis) to the Oxford English Dictionary, meanings of words change, and words are used to great effect in advertising and media campaigns.

Having worked in marketing and public relations for over 20 years, the use of words and their power is something that I have manipulated on a daily basis.  And when it comes to dog training and behaviour, there are five words which I feel undermine the human-canine bond.

1.  Dominant (and its variants)
[/ˈdämənənt/ Adjective:   Commanding, controlling, or prevailing over all others. Of a position: commanding a view from a superior height]

The first word on the list is the ‘good old’ D word!  Dominance is a dirty word in most dog training circles.  It’s a phrase that sparks much debate on social media forums, especially when applied to dogs.

Hand in hand with dominance is the concept of being a pack leader at the top of the hierarchy, controlling and maintaining order.  It’s often said that to be an effective dog owner/guardian, you need to be a ‘pack leader’ and assert your dominance over your dog.  However, if we look at the research into where the concept of pack structure and hierarchy originated we will find that it has primarily been of two types: field and captive wolves.  This, in turn, has led to disagreements on how the data should be interpreted (Miklósi, 2007).

Back in the 1940s, the early studies researched the social dynamics of captive wolves, where unrelated wolves were brought together, in captivity, and observed.  In this setting, the wolves demonstrated a linear hierarchy (Schenkel, 1947) and it was from these studies that the term ‘alpha’ was derived; denoting dominance and a ‘top dog’ structure.  Adding to this, later research also suggested that within this linear hierarchy, there was a separate hierarchy within each gender (Zimen, 1982).

In such an artificial setting, aggression and dominance displays for both male and female wolves are common, especially during breeding season (Schenkel,1947).  It was this behaviour that sparked the thought that wolves aimed for alpha status to ensure the propagation of their genes (Miklósi, 2007).

More recent studies of wild wolves have challenged these findings. They identified a more flexible, familial structure (Mech, 1999), with an unrelated breeding pair of wolves, coming together and rearing their young.  In this setting there is no general battle to become top dog and pack leader, as this role naturally stays with the parents (Mech, 2008).

Dominance within dogs is a complex area and it is not an area that this blog will go into detail about.  The focus is more on how it is used in everyday speech, where the phrase has become a synonym for many an unwanted behaviour.

Often, a client (or, occasionally, another animal care professional) may say that their dog is dominant.  In reality, what this often translates to is that the dog won’t do what their human asks or acts inappropriately in a given context.  For example: a dog that won’t move off the couch (the dog is being ‘dominant’ by lying on the couch), a dog snoozing at the top of the stairs and not coming when called (the dog is being ‘dominant’ by remaining ‘higher’ the humans), or an on lead dog that barks or growls at other dogs when they approach them (the dog is showing ‘dominance’ towards the other dogs).

When you look at it, the cases where humans label dogs as dominant are generally down to a lack of training, inconsistent training or not understanding the dog’s emotional response to a situation.  The dog that won’t move off the couch, may be resting on the couch simply because it’s comfortable and they haven’t been taught the benefits of resting on their bed, or an ‘off’ cue.  The dog that is snoozing at the top of the stairs and not coming when called, may not have been taught a reliable recall and, again, is simply in a comfortable resting place.  On-lead dogs who bark or growl at other approaching dogs may be doing so as a result of fear or frustration.

Let’s face it, Homo sapiens are the dominant species on this planet. Our dogs don’t have opposable thumbs and they’re not hell-bent on some Machiavellian mission to take over the world or dominate our lives!   That’s not to say that our dogs don’t require boundaries and social structure, but can’t we just put the notion of being the ‘top dog’ asserting dominance over our canine companions, behind us now?

2.  Bribe
[/brīb/ Verb:  To induce or influence by bribery.  Noun: Something given or promised to influence somebody’s judgment or conduct.]

The next word on my list is bribe.  All too often, those of us who train with food (and/or toys) are accused of bribing our dogs.

Sometimes, people may say that a dog should do as you ask, ‘out of respect’ or ‘because they should’ and that we shouldn’t have to bribe them to do a behaviour.  The use of the word ‘bribe’ in this context shows a lack of understanding of learning theory and operant conditioning.

We need to be clear on how food is used as a reinforcer to strengthen the frequency of behaviours.  I often liken it to ‘pay’ (a very human concept).  For  me to receive my pay, I have to turn up to work and undertake the required tasks; my pay is contingent on me doing this.  If I turn up and don’t undertake my tasks or I just don’t bother to turn up,  the likelihood is that I won’t get my pay.  Getting paid each month, increases the frequency of my attendance and ensures that I complete my tasks – simple! It’s the same concept for dogs.

3.  Treat
[/trēt/ Noun:  Something that gives great pleasure. An act of providing something for somebody else at one’s own expense]

You may wonder why the word treat has made it to the list.  I must be clear that I don’t have any issue with using food reinforcers in training at all, but I do have an issue with the word ‘treat’. Why, you may ask?

Well, in my mind (thanks to lots of advertising for chocolate and luxury goods) a ‘treat’ is synonymous with spoiling and indulging ourselves.  A ‘treat’ for a hard day at work –  a glass of wine – that ‘little’ ‘naughty’ something we all love.  That inference can affect how we and clients see the use of food (or toys) in training and, in my opinion, does us a disservice.

We ‘treat’ ourselves sparingly (if it were a regular occurrence, it would not be at treat), and this concept can spill over into how often we ‘treat’ (reinforce) our dogs.  All too often, we reinforce the dog too sparingly, especially when training a new behaviour, and it is this infrequency of reinforcement that can frustrate both humans and hounds when trying to establish a new behaviour.

4. Guilty
[/ɡiltē/ Adjective:  Suggesting guilt, ie feelings of being at fault or to blame]

OK, let’s address this one once and for all. Dogs don’t ‘do’ guilt! Guilt is a human construct (and believe me, as a lapsed Roman Catholic, I know more than my fair share about guilt).

All those ‘cute’ videos you see doing the rounds on Facebook and YouTube, showing dogs looking ‘guilty’ when their owners come home? The dogs aren’t displaying signs of guilt, they’re displaying appeasement gestures which are used to signal conflict reduction.

These ‘guilty’ looks are a direct response to the human who, more often than not, is angry at the perceived crime the dog has committed.  The dog who poops or destroys things while you’re out of the house, and then looks ‘guilty’ when you return?  The dog hasn’t necessarily associated the act of pooping on the floor or destroying stuff is an unwanted behaviour.  They haven’t made the connection between the act of pooping/destroying stuff in the house being ‘wrong’, their ‘guilt’ is a direct response to the human’s anger.

The concept of ‘right’ and ‘wrong’ is purely a human construct.

The last word on the list is No! I’m sure there are many dogs in the world who think that their name is ‘No!’ It seems to be a word that is used with great abandon and one that many people think their dog understands.  But do they?

If we look at the how the word is often used in dog training, it is simply an interjection.  It does not tell the dog anything and, in some cases, can act as an inadvertent reinforcer, by providing the dog with a reason to continue with the behaviour!

When working with clients, I ask them what they think ‘No!’ means to their dog and how often do they use the word.  In most cases, the response is along the lines of ‘stop doing that.’  However, in my opinion, the most important part of the statement is missing!
Rather than ‘No!’, think about what you would like your dog to do instead.

Whether we like it or not, our choice and use of words can affect our  relationships with dogs. Perhaps we should be mindful of the old adage – Think, before you speak – when choosing our words to describe dog training and behaviour.